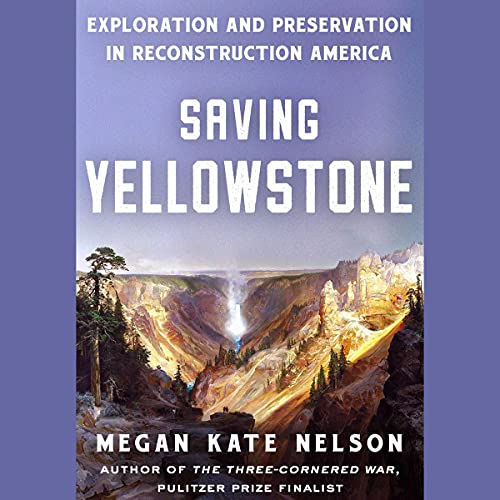 From historian and critically acclaimed author of The Three-Cornered War comes the propulsive and vividly told story of how Yellowstone became the world’s first national park amid the nationwide turmoil and racial violence of the Reconstruction era.

Each year nearly four million people visit Yellowstone National Park - one of the most popular of all national parks - but few know the fascinating and complex historical context in which it was established. In late July 1871, the geologist-explorer Ferdinand Hayden led a team of scientists through a narrow canyon into Yellowstone Basin, entering one of the last unmapped places in the country. The survey’s discoveries led to the passage of the Yellowstone Act in 1872, which created the first national park in the world.

Now, author Megan Kate Nelson examines the larger context of this American moment, illuminating Hayden’s survey as a national project meant to give Americans a sense of achievement and unity in the wake of a destructive civil war. Saving Yellowstone follows Hayden and two other protagonists in pursuit of their own agendas: Sitting Bull, a Lakota leader who asserted his peoples’ claim to their homelands, and financier Jay Cooke, who wanted to secure his national reputation by building the Northern Pacific Railroad through the Great Northwest. Hayden, Cooke, and Sitting Bull staked their claims to Yellowstone at a critical moment in Reconstruction, when the Grant Administration and the 42nd Congress were testing the reach and the purpose of federal power across the nation.

A narrative of adventure and exploration, Saving Yellowstone is also a story of Indigenous resistance, the expansive reach of railroad, photographic, and publishing technologies, and the struggles of Black southerners to bring racial terrorists to justice. It reveals how the early 1870s were a turning point in the nation’s history, as white Americans ultimately abandoned the the higher ideal of equality for all people, creating a much more fragile and divided United States.

What listeners say about Saving Yellowstone