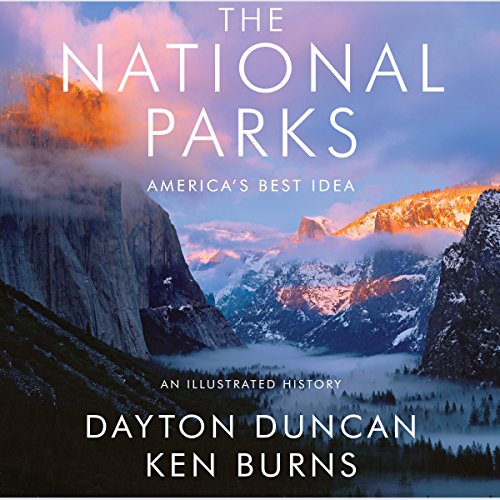 By: Dayton Duncan,Ken Burns
Narrated by: Ken Burns
Try for $0.00

The companion volume to the 12-hour PBS series from the acclaimed filmmaker behind The Civil War, Baseball, and The War.

America’s national parks spring from an idea as radical as the Declaration of Independence: that the nation’s most magnificent and sacred places should be preserved, not for royalty or the rich, but for everyone. In this evocative and lavishly illustrated narrative, Ken Burns and Dayton Duncan delve into the history of the park idea, from the first sighting by white men in 1851 of the valley that would become Yosemite and the creation of the world’s first national park at Yellowstone in 1872, through the most recent additions to a system that now encompasses nearly 400 sites and 84 million acres.

The authors recount the adventures, mythmaking, and intense political battles behind the evolution of the park system, and the enduring ideals that fostered its growth. They capture the importance and splendors of the individual parks: from Haleakala in Hawaii to Acadia in Maine, from Denali in Alaska to the Everglades in Florida, from Glacier in Montana to Big Bend in Texas. And they introduce us to a diverse cast of compelling characters - both unsung heroes and famous figures such as John Muir, Theodore Roosevelt, and Ansel Adams - who have been transformed by these special places and committed themselves to saving them from destruction so that the rest of us could be transformed as well.

The National Parks is a glorious celebration of an essential expression of American democracy.

What listeners say about The National Parks

5 stars from this National Park junkie

Being the grandson of a park ranger, I greatly appreciated this long overdue in-depth examination of how the NPS and its various parks and monuments came into being.

While they gave credit where it was rightfully due for the most part, there are two instances here where they did not (hence my 4-star rating of an otherwise 5-star book):

1) The cover states "Read by the authors with a supporting cast". While Mr. Burns does read the preface and Mr. Duncan does read the afterword, the "supporting cast" does most of the reading, especially Danny Campbell. He definitely should be listed in the narrated by section, along with Ms. Farr, Mr. Ervin, Mr. Mayer, Mr. Peterson, and Ms. Raver.

2) In the book, we hear about George Melendez Wright's unsuccessful effort to turn Big Bend into an international park with Mexico, yet there is no mention of the successful effort that Rotarians in the U.S. and Canada made for creating the very first international park, uniting Canada's Waterton Lakes with Glacier. Given the amount of time Mr. Duncan has spent in Glacier, maybe this was an unintentional oversight, thinking it was always so?

If there was one book about America's history that I would recommend to anyone to read or listen to, this would be the one. I enjoyed the Audiobook so much, I went out and purchased the actual Hard Cover so I could read it again, but this time with my own eyes. In addition, my father who is not too big into reading, listened to a chapter with me while working and really enjoyed the book. Now he keeps asking me about how the book went and ended. This is a must have book for anyone with a love for the outdoors and our National Parks.

Noticing some reviewers said that this book is boring and dull I would like to mention that this book is more of a history, development and experiences of those involved in the creation and protection of the parks. To me this book is great I have visited many of the most notorious parks Yosemite, Yellowstone, Glacier, Smoky etc. so when the book describes the experiences of those involved I can already picture the scenes and feel what the characters felt, perhaps that's why I failed to find it boring. For those that find the parks spiritual or something greater as I do they will perhaps feel themselves as of they were present during the story. Learning the history was interesting and makes me more grateful and appreciative for the parks and for those involved in the creation and protection. For those that love the parks or aspire to travel the parks and want to know the history I would recommend this book. If your looking for a travel guide this is not the book.

Listened to it twice

The perfect book to listen to as you're painting or doing anything relaxing. Makes you proud of our history.

Brilliant Chronicle of Our Parks and their People

Let's get this out of the way first - any hesitation as to whether the book will live up to the amazing cinematography, music, etc., in the fabulous PBS projection... just wipe that from your mind. This book is beautifully descriptive, in both geographic terms and personal characterizations. I couldn't stop listening (and I didn't expect that.) I now appreciate the history of the parks as an important aspect of the history of our Nation, and I have great respect and admiration for the men and women who created the National Parks Service. Who else preserves history? Who else ensures that fact (real fact) is available for future generations, with thoughtful interpretation? Not the universities, not our government at large, and NOT the media. Thanks for Ken Burns, Dayton Duncan, and all who made this book possible.

This book was hard to focus on thouroughly due to the monotone and seemingly uninterested narrators. A good bridge to the PBS documentary series which I would highly recommend read by the actual people with real emotion toward what they are talking about

Good companion to the documentary

Both the book and documentary are utterly inspiring. Dayton Duncan and Ken Burns are my hero’s. Only wish either Duncan or Shelton Johnson had narrated. I found most the commentators either robotically miscast or slightly chaffing to the ear. Although I’m sure their nice people :)

Great listen all around. Incredibly discriptional and informative. Good supplemental information to the PBS series.

awkward compared to the film series

The interview portions were awkward to listen too, would have preferred to just listen to the story tellers without the "interviewers" interruptions.