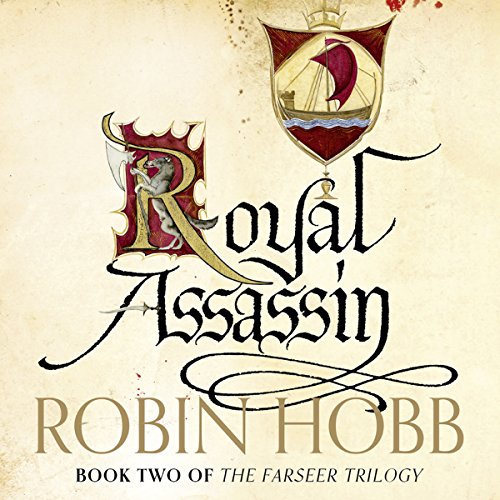 By: Robin Hobb
Narrated by: Paul Boehmer
Try for $0.00

We are here Fitz, you and I, to change the future and the world…

Fitz dreams of Red-Ship Raiders sacking a coastal village, leaving not a single man, woman, or child alive. Tortured by this terrible vision, he returns to the Six Duchies court where all is far from well.

King Shrewd has been struck down by a mysterious illness and King-in-waiting, Verity, spends all his time attempting to conjure storms to confuse and destroy the Red-Ship Raiders. And when he leaves on an insane mission to seek out the mystical Elderings, Fitz is left alone and friendless but for the wolf Nighteyes and the King’s Fool with his cryptic prophesies.

“Hobb is one of the great modern fantasy writers … what makes her novels as addictive as morphine is not just their imaginative brilliance but the way her characters are compromised and manipulated by politics.” ( The Times)
“In today’s crowded fantasy market Robin Hobb’s books are like diamonds in a sea of zircons” (George R. R. Martin)

What listeners say about Royal Assassin

somewhere in the middle the amount of stupid decisions made by what looked like smart characters made me lost interest in the series now only my compulsive instinct to put an end to things is what will have me hearing the next one.

This is 90's Game of Thrones to me

Brilliant story with really good flow and gripping arc. All the Characters are there for a reason

Great tale, yet slow at some points

Great listen, but sometimes the story slows down and looses the listener. But, towards the end these problems fade away.

the narrator has done a great job and the story pulls you to it. couldn't stop listening 😊

To much angst and not enough intelligence in story

I can’t finish this book. The characters are both hypercapable in some aspects but then also unbelievably useless in others. Provides a background for lots of self flagellation and angst, but not much else.
How can you continue accepting a “king” who is so cunning and manipulative he has everyone tied in knots and scared of reprisal, yet he allows a blatantly treasonous and shallow son to keep attempting to kill or disable him, and also orders no one else to stop him either. They all bloody deserve it for being so incompetent.
Eventually just gave me the irrits

When a narrator can jolt a listener out of a world created by the author it is woeful. It's so hard to pick up the thread and move on when the irritation lasts a while. This narrator seemed incapable of sounding o as in hot, cot, dot etc. He insisted on adding an r... so hot became hort, cot- cort etc. I'm pretty sure it was an affectation (probably trying for received British accent) because every so often he forgot ... er I mean forgort haha and pronounced that sound as most people would... When he did slip up it was when he was moving faster through the text at moments of tension. He put in an OK effort in tone, pitch, speed etc, but there were a few 'blinders' in pronunication appart frorm the o sound.
If the story had been weaker I would have given up long before the end. Do editors ever listen to the product part way through a recording??? If they did, they could catch these irritants and deliver a much better product... er... prorduct.

This book is quite simply stunning and an amazing follow up to 'Assassin's Apprentice'. The audiobook is beautifully told, too, and thus you must add it to your library!

Paul Boehmer acts so incredibly the characters in the book and Robin Hobb has written a truly wonderful story. It was thoroughly enjoyable experience!

Even more awesome than part 1

I really enjoyed part 1 of this trilogy, Assassin's Apprentice, and hoped that this even longer sequel would be as good. Well, as it turned out I found it even better! Hobb's style of writing, especially when combined with Boehmer's narration, evokes something like a combination of a Grimm fairytale atmosphere, with hints of mythology and ancient lore. I could even detect some Star Wars, with a grand romance, great evil, lots of action and something resembling Jedi force use!

This is fantasy as it should be done. Can't get enough of it.

I cannot wait to start listening to part 3, and then on to the other six (!) Realms of the Elderings books (two more trilogies, yea!)

I love parts of the book, when I get involved with strong feelings towards the charcters and events of the story. I just dont think that happens quite enough.
Not quite enough is what I think about much of this and the other Farseer books. I dont quite see it, dont quite feel it, dont quite love it.

I loved reading the first book in the trilogy, and still think Robin Hobb a good author. While the story here is inventive and I was looking forward to listening to this one, it was spoiled by the narration. Is this meant to be an English accent? Incompetent voice coach if it is. I would have given no stars if possible. I shall get the third book from the library and read it, far more satisfying to give the characters voices n my own head.

I live these books but not the narrator

I have read the books many times and I never got the audio books dur to the narrarors annoying fake British accent but in the end gave in for the love of Fitz and the fool.
still annoys me

Great story and great to read, but the narrator is awful, takes you out of the world. Recommend buying the book instead.

excellent story and world-building but...

the performance is shocking at times, with a glaringly fake English accent. hire someone who's actually English if you want that kind of sound, it's passable at times but it's immersion shattering in some moments. he's obviously American

Paul Boehmer has one of the worst fake British accents I've ever heard. It sounds so strange to British ears! So many outlandish mispronunciations, I found it quite amusing... The book itself is fantastic, I enjoyed it even more than the first one. Night eyes is such a great character.

narrated is inconsistent but story good

the narrate is just as frustrating as ever with his terrible fake accent, although it's less jarring 2 books in. I don't see why he changed his voice for Burridge compared to the first, nor why he changed it for Fitz from boy to man mid way through a chapter

Despite really poor accent from the narrator this is a great book and I would heartily recommend it.

I really enjoyed this book, a good story, well thought out. Sadly the reader drops accent a fair few times.

This is a frustrating book. Fitz is so incredibly dumb that almost the whole book you'll be shaking your head wondering wtf the author was thinking. His friends aren't much brighter.

A big step down from book 1.

I love this series and the performance is great. I will revisit this one for sure

fitz sporadically sounds american which is distracting and cook is irish when it pleases the performer. these inconsistencies take you out of this perfect world Robin Hobb has built. i wouldnt let these criticisms stop you.

Why is this so long?

Nothing happens for so much of it.
It's like the whole book is the middle of a better book

I am not even pausing before starting the next one! I cant wait ro devour them all.

Both beautiful and sensitive

I read Royal Assassin a few years ago. Captivated, I knew I'd found an author in Robin Hobb whose examination of characters and the intersection of diverse cultures is colourful and clever. Robin Hobb's portrayal of animals and the potential of relationships between animal and human closely matches my own lived experiences and convictions.

With the audio book I was curious - would I still be as enamoured as I was with my first reading years ago? The answer is Yes!

Paul Boehmer's narration carried me splendidly and convincingly through the rich tableau of characters, events, settings, and suspense. I felt as though I was participating, not an outsider.

At the end of the last chapter I wiped away tears. The threads are so beautifully and sensitively brought together.

Even better than the first

So many twists in the plot. The concept of wit and skill get deeper and darker.

Robin Hobb is the best fantasy author, and the narrator has brought it alive perfectly. Well done!

Such a great sequel. The character development continues where you left off in the previous book. such raw and real emotion.