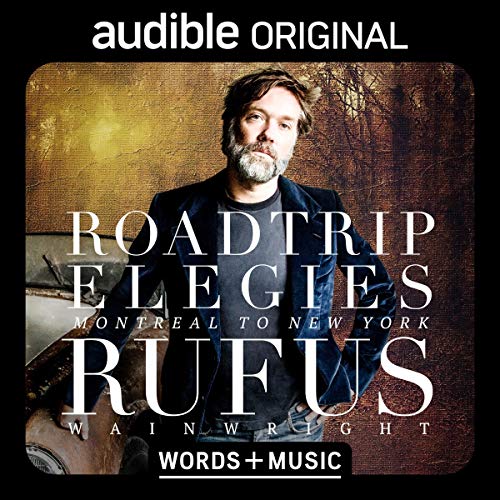 Go Behind the Scenes of Road Trip Elegies

Celebrated singer, songwriter, and composer Rufus Wainwright knows exactly what to pack for his journey between St. Sauveur, Quebec, and New York City. He's intimately familiar with the route, from its topography to its emotional touchstones - each mile nearly etched into his psyche. The starting point, nestled in the Laurentian Mountains, is an hour northeast of Montreal and home to a large part of his fabled upbringing, with its rich maternal lineage and musical legacy. It's also loaded with some good ol' fashioned baggage. The end point, New York, like for so many before and after him, serves as a storied stomping ground for his rise as an artist and person, independent of his family. It's an ever-alluring but uneasy place, as it's dished out equal measures of validation and indifference throughout their testy relationship.

In Road Trip Elegies, Rufus sets out on the trek with his usual personal effects: a treasure trove of memories, a razor-sharp wit, and a big appetite for healthy self-reflection. But on this particular trip, he's packed two additional items to help navigate the experience: something to record himself with and someone to talk to. For the latter, Rufus has tapped his therapist. Yes, Mark the Analyst. (Hey, why not go for the best?) What ensues over the course of three one-hour episodes is a captivating, detailed, and candid coming of age story - an artist's awakening - shared by a man who uniquely understands from whence he came and how it's all played out ever since. As satisfying or soulful a premise that may be - Rufus is the consummate showman - Road Trip Elegies offers its listeners much, much more.

If Elegies is anchored in Rufus' driving excavation as an artist and son (his beloved mother, Canadian folk icon Kate McGarrigle, is an essential and enduring force in his life), the title is truly lifted and made whole by its spectacular musical counterpart. Generously woven throughout the duration of the drive, each live cut (more than 20 tracks in total) is plucked from an exquisite, recent set of performances some 3,000 miles west. Captured at McCabe's Guitar Store, a music venue in Los Angeles, the three-night run was designed specifically to accompany and punctuate moments and themes derived from his Road Trip. Backed by a tight-knit four-piece band, including his sister, Lucy Wainwright Roche (vocals), and Petra Haden (vocals/violin), and featuring top-notch stage banter throughout, Rufus seamlessly moves between a sweeping breadth of songs that span generation, genre, and timbre. Many tunes were penned by his own notable family members, Kate and Anna McGarrigle, or his distinguished folk-writing father, Loudon Wainwright III; others are gorgeously Rufus-ized versions of standards from the stage, the Great American Songbook, or more modern classics. Cue: Dylan's "A Hard Rain's a-Gonna Fall" and Barry Gibb's always welcome "Islands in the Stream". Enveloped in the warmth of devoted fans and a host of admiring special attendees (Burt Bacharach, Jessica Chastain, Mike Stoller, Shirley MacLaine, Chris Guest, Darren Criss, Anjelica Huston, Jackson Browne, and Van Dyke Parks to name-drop a few), the performance, throughout, conveys a fantastic sense of both intimacy and electricity.

By the time Rufus approaches the city, we've been richly serenaded with beautiful melodies courtesy of the West Coast and moving stories down the state thruway. Driving solo now (don't worry, his intrepid therapist was safely dropped off in Westchester), Rufus is admittedly fully loopy: emotionally drained but highly entertaining. The final leg has the remarkably palpable vibe of just Rufus and you, working in parallel, looking to land closure. Total catharsis is of course out of reach, but Rufus' Road Trip Elegies is a bold and beautiful testament to the power of not compartmentalizing our various parts or striving to disown our past, but rather, willfully embracing the full extent of us; seeking to grasp and contain even our most challenging of pieces to arrive, more completely, at peace of mind.

Take a trip with an artist like no other

There's a couple lines in Rufus Wainwright's song Poses that are always with me: I did go from wanting to be someone / Now I'm drunk and wearing flip-flops on Fifth Avenue / Once you've fallen from classical virtue / Won't have a soul for to wake up and hold you. When I first heard that—much like when I first heard the singer-songwriter's lush, elastic tenor—I was utterly blown away. That someone could capture the drama (and mundanity) of life like that and blend the highs and lows — hope, sadness, humor, despair—so candidly, it was clear that Wainwright possessed a range—not just vocally and musically, but emotionally—that the best artists have. That range is on full display here in Road Trip Elegies, as Wainwright blends music, motion, and analysis into a one-of-a-kind listening experience that serves as a brilliant coming of age story and an artist's reckoning with his musical legacy. Part road trip confessional and part musical retrospective, the result is pure Rufus Wainwright: beautiful, extravagant, honest, and totally original.


Seeing and hearing other people—whether a stranger, a friend, or a celebrity—talk about their struggles with mental health helps make us feel less alone. And that sense of community often encourages those struggling to take steps towards treatment. There is nothing wrong with needing help and wanting to feel better—and some truly exceptional mental health audiobooks and podcasts are available to keep you company on that journey.

A very different listen for me. Interesting perspective into a long, sometimes troubled life. Especially appreciated the music, both original and classic; it all fit me very well. I have very specific musical friends I’d enjoy sharing this with. Look forward to doing so. Really enjoyed the Rufus voice on the songs; wide talent range. A very brave story.

If you are a Rufus Wainwright fan - which is everyone who has ever heard him sing - I don’t have to tell you that you need this audiobook.

If you aren’t familiar with Rufus Wainwright you owe it to yourself to get to know him by listening to his endearing memoir and getting a taste of his beautiful lush singing voice.

Pure genius told in his own voice.

Loved going on the road trip with Rufus and his therapist. Songs and stories come from the deep well of our being. I appreciate Rufus' honesty on his journey and relationships. I wish him continued success in his career and personal life.

Rufus music fan. Not into a prolonged psychotherapy session

Mommy and Daddy issues from a person who is a great musician. This felt so much longer than 3.5 hours. Painful unless you get paid hundreds of dollars an hour like the psychotherapist who tags along for the Montreal to NYC trip this is. Avoid at all costs and just listen to his music.

I am so moved by the story and the music, the memories and the magic. Thank you for publishing this thank you for your love of the arts. God’s blessings today and always! Lucia

Just lovely and soft despite some of the stories. It’s family and figuring out how to make it through the good and not so good..and the backdrop of place that is always there

Don’t listen to this one if you are wanting to drift off to sleep. It will keep you awake. I am old enough that I knew his parents’ music first. I love that the story is sprinkled through with history, some of which I needed to look up. Always nice to be entertained and also learn something. What a lovely guy. It does kinda fall apart at the end... I would listen to another road trip in a heartbeat, tho.

Brilliant concept.
I listened to this on a NY road trip too.
So many great songs.
Loved Rufus’ musings on the intersection of opera & pop.

Been on my radar for just some time

Amazing evening. Many thanks..
Why does Audible require twelve more words, my charming and lovely, friends?

I haven’t heard anything like this before. If you’re a fan, I think you’ll love this. I also think casual listeners will find it enjoyable as well. This would be an interesting way to make albums in the future. Instead of just the tracks, you get an all encompassing story and a ton of insight into the songs. Just a thought.