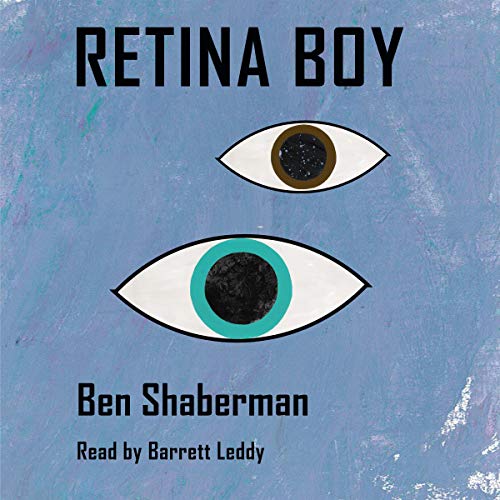 By: Ben Shaberman
Narrated by: Barrett Leddy
Try for $0.00

Researchers were mystified by the boy from Des Moines born without retinas. Strangers and friends were mesmerized by his luminescent, aquamarine eyes.

Retina Boy grew up to be a carefree teenager. He played amazing lead guitar in an awesome, classic rock cover band. His girlfriend, Marcy, though unable to walk, was the smartest kid in their school.

They were a perfect pair - she was his eyes, and he was her legs. Never did Retina Boy imagine he was from another planet, and that he and Marcy would be called upon to save the Earth and an alien world of blind inhabitants on the brink of environmental collapse.

What listeners say about Retina Boy

I really enjoyed the story and found it engaging and interesting. Made me think about how what we see may not just be through the eyes. Can't wait for the next book!

This was a fun read/listen! The author has put together and engaging sci-fi story that also integrates what it means to be living with vision loss. The blind shown to be resilient and amazingly able individuals. I definitely recommend it! Looking forward to Shaberman‘s next installment of RETINA BOY

I listened to this book because I’m a pediatric ophthalmologist who works in gene therapy for kids with blindness. The book exceeded my expectations on so many levels. First, it got the medicine right, which is no surprise considering the author’s professional experience with the Foundation Fighting Blindness. But much more than that, I was quickly drawn in by the interesting, 3-dimensional main characters, with their mix of disabilities and gifted abilities. I cared about their friendships and romantic relationships and teenage insecurities. Furthermore, the subplots involving music, the environment, corporate greed, etc. explored a range of concerns that will resonate with YA and more mature audiences alike. In short, I didn’t want the book to end, and hope there will be a sequel starring Retina Boy and friends.

Beyond an intriguing story

My son is visually impaired and both of us read/listened to this book. It is such an intriguing story and the storyline unfolds beautifully. As a scientist, I really appreciated the scientific accuracy of this sci-fi novel (lots of novels lack that). Beyond just being an intriguing story, it provides an amazing different view of our so called everyday world, perspectives, and humanities.

Out of this world!

I found Retina Boy to be a very interesting story. At times I had a hard time keeping up, but I often listen to books as I'm doing other things. The story line was cool and it had some neat twists and turns. I liked that the book touched on being kind to one another and not judging people for disabilities. I think the overall message was very positive and I found that to be a pleasant change compared to other books I've read/listened to recently.

Great story that will keep your attention!

I listened to it from start to finish in one sitting. Whether you’re visually impaired or not, you’ll find this a creative and enjoyable story! Those with visual impairment will be able to relate and find it that much more enjoyable. I recommend it for all!

I loved this story!

The story is fun, creative, topically relevant and very personal to me. I have lost my vision from an inherited retinal disease. Thank you Ben for taking the time to write this wonderful book and for all you do in the fight to cure blindness!