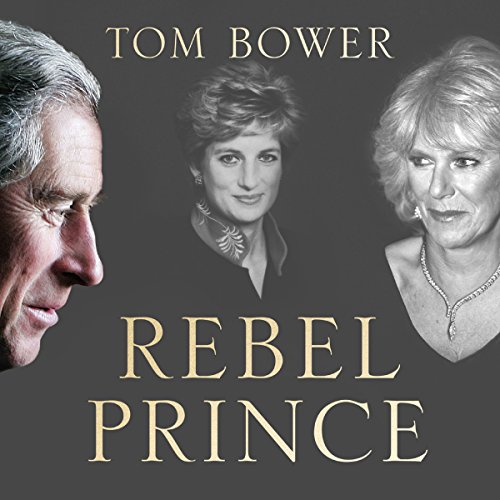 Rebel Prince: The Power, Passion and Defiance of Prince Charles

Few heirs to the throne have suffered as much humiliation as Prince Charles. Despite his hard work and genuine concern for the disadvantaged, he has struggled to overcome his unpopularity. After Diana's death, his approval rating crashed to 4 percent and has been rescued only by his marriage to Camilla. Nevertheless, just one-third of Britons now support him to be the next king.

Many still fear that his accession to the throne will cause a constitutional crisis. That mistrust climaxed in the aftermath of the trial of Paul Burrell, Diana's butler, acquitted after the Queen's sensational 'recollection'. In unearthing many secrets surrounding that and many other dramas, Bower's book, relying on the testimony from over 120 people employed or welcomed into the inner sanctum of Clarence House, reveals a royal household rife with intrigue and misconduct. The result is a book which uniquely will probe into the character and court of the Charles that no one, until now, has seen.

What listeners say about Rebel Prince: The Power, Passion and Defiance of Prince Charles

The King wears no clothes

A book with eye-openings about Charles and other royalties.

Many specifics were known to me and gave validity to the book. What I didn’t know was the ‘ponytail’ projects behind what was the result of years of deliberate scheming of Charles.
Astonishing is Charles show of entitlement and abuse of people.
Alarming is his sympathy with the ISIS/Islam nations and associated royalty in exchange for money.
Camilla might be seen as calming him but EVERY move is choreographed to feed their narcissistic beasts.
Long live the Queen!

Wow, God save the Queen

A sad reflection on a man born into privilege by an accident of birth. Perhaps by the time he becomes King he may have learned some humility.

interesting story and insightful look at the monarchy . If this is a completely accurate account then it doesn't bode well for the future.

Heaven help us when Charles becomes King. He’s pampered and doesn’t live in the real world. A vain man who has only self interest for himself and his wife. A fascinating insight and well researched.

I have to say I was expecting this to be little more than a sycophantic trawl through his past achievements. However I thought I’d give it a go anyway as it were. It is surprisingly good. If the future of the monarchy interests you (either for or against) this book will, I believe, be of great interest.

I only stuck this book for the first few chapters. It had no balance. It seemed the author had decided Prince Charles is worthless and selfish and provided ‘evidence’ only to support his opinion. As he refused to cite his sources we are just supposed to take his word for it. Attacking people who can not defend themselves with unsubstantiated evidence is easy money and deeply unpleasant. Maybe future chapters will be better but I’m not wasting any more time finding out.

First off I have enjoyed listening to this book and it's well narrated but really it's just confirmed my thoughts of the Windsors and entourage. I've come to the conclusion that Prince Charles thinks he has a god given right to do as he wishes and to whom. In this book he comes across as a spoilt, self indulgent individual. Although to be fair most of the 'firm' have the same attitude.

I should stop reading/listening to biographies and memoirs concerning the Royal family as I just get annoyed at the way they seem to live on a different planet from us mere mortals, Charles more so than the rest....

Anyway I bought the book in a BOGOF so worth it..

Really glued to this, brilliant portrayal of royal life which left me totally certain it’s all true. Not much appears to have changed since medieval times as far as royal intrigues and machinations are concerned but these days thanks to great writers like Tom Bower we peasants all get to hear about it!!!

The TRUTH about Royalty

If you only manage to read one book about royalty , do yourself a favour and make it this book! Seriously impressive and seriously informative.....

I agree entirely with a previous reviewer. After the first two hours I became totally bored with the unrelenting anti Prince Charles slant. it is too extreme and looks as if his character is being blackened in order to promote and sell a book. No one is 100% bad. Surely his devotion to causes such as architecture and the environment is a good thing and to criticise him for his dislike of Tony Blair ? I would regard that as a recommendation. The author admits he knew nothing about Charles when he decided to write a book and spent a few months researching. I would suggest that he thought that the books sales were likely to be higher by having a good bitch about the Prince

The book was as exciting as any political thriller and I couldn’t put it down. The machinations of the Prince and his courtiers was quite eye opening. I particularly enjoyed all the gossip and scandals. It gave me a fascinating insight into the character of Charles and his threat to the stability of the monarchy. Tom Bower has written an insightful account of both events and Charles’ role in and reaction to them. It was read at a good pace but I sometimes found the narrator a little too cynical in his tone which influenced the narrative rather than leaving me to determine how to interpret matters. Overall though a great read. All I can hope is that the Queen lives to 105.

This is not for fans of Charles.

Personally, I’m on the fence about Prince Charles. I think, like most of us, he’s neither all good or all bad. However, this book skews to focusing on his negative characteristics. I’m fascinated by the British Royal family and therefore thought I had read everything there was to know about them. But there were stories and insights in this book that I had never heard before. The narrator has a nice even tone but I had to slow it down slightly.

Such a great read gives you an insight into what goes on in the background in the royal family, loved it

I found the book quite long because I'm not familiar with many of the names.
It was well read however and interesting.
To the average person it is unbelievable how conceited and arrogant Charles is.
Even if 20% is true, I would resent having him as king. I hope Australia removes the Union Jack from our flag after Queen Elizabeth.