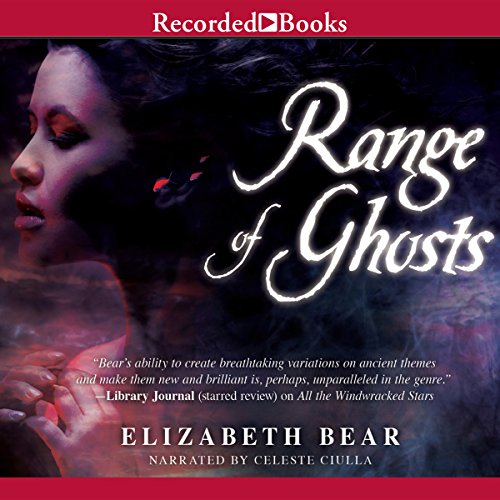 By: Elizabeth Bear
Narrated by: Celeste Ciulla
Try for $0.00

In a world where wizards are unable to procreate, Temur, heir to his empire’s throne, flees to avoid assassination. Once-Princess Samarkar, formerly heir to her own empire’s throne, gives up everything to seek the wizards’ magical power. Drawn together by fate, Temur and the Once-Princess must stand against a cult inciting strife and civil war in all the empires.

What listeners say about Range of Ghosts

Elizabeth Bear has clearly done her history homework. Not that this is history, or even alternate history, but more a hero's tale knitted from impressions of history. In a world where various empires have come and gone, battling gods have shattered the very sky. The war rising to sweep across nations begins with a reluctant claimant to a his grandfather's throne, stumbling alone off the battlefield after having been left for dead.

Temur doesn't want to rule, he only wants to live and maybe find a new family with the woman he loves, but his uncle wants him dead, and a distant cult bent on sowing chaos and destruction wants to use him, or his unborn child.

Once-Princess Samarkar has given up her fertility to find power of her own. Now she must put her skills and wits to use in aiding Temur's cause, as that seems the best course of stopping the cult using necromancy and black sorcery that is seeking to spread war to every realm under the shattered sky.

The story moved along at a good speed, and I found the characters believable, earthy and easy to care about. Just be warned that this is part one, and the end will leave you desperately wanting to know what happens next.

I've been trying to read more fantasy with non-traditional settings (i.e. not patterned after medieval Europe), and this one got some positive press on a sci-fi/fantasy blog I follow. Elizabeth Bear really does do a fine job with world building, crafting a mythic, magic-infused reality patterned after Central Asia, with analogs of Mongolia, China, Persia (I think), Arabia (I think), and a few other places. The images she conjures up can be quite lovely and cinematic, and I enjoyed the concept of having different skies in different places, such as the multiple moons that hang over the steppe, or the sun that goes west-to-east in another land.

Bear also does a good job of developing a world where women wield power in different ways, as rulers, magicians, or soldiers. It's not overdone, with the sort of ridiculous female badasses one sees in some books, but feels authentic to the world. The most compelling character here is the former princess Samarkar, who chose to sacrifice her title and fertility to begin training in magic. The catch of this system, though, is that a lot of people who make the sacrifice don’t receive the gift, but have no way of knowing in advance.

That said, I was less enamored with the plot, which didn’t offer many surprises. After a picturesque opening in which the young steppe warrior, Temur, regains consciousness on a corpse-littered battlefield, he meets a young woman from another tribe, falls for her, then vows to rescue her after she’s abducted by ghosts summoned by an enemy wizard. He meets up with Samarkar and several other characters, and they travel about, trying to rally the forces of good against a coming war that will no doubt feature in the sequel. Except for a few good scenes, it’s not much more riveting than my summary. It’s hard for me to get excited about action sequences where the main characters are all rather competent, work together well, and never seem in much danger.

Hardly a *bad* book, though -- I applaud Bear for doing the Guy Gavriel Kay magical-historical fantasy thing pretty well with her setting and her writing is a cut above the rest of the pack -- but the characters, storyline, and themes didn’t excite me as much as I’d hoped they would. And I wasn’t a great fan of Celeste Ciulla’s audiobook reading -- it sounded too “modern” to my ears.

Call this an on-the-fence review. Not a book I would dissuade others from reading, since Bear is a capable writer and worth investigating, but not one of my strongest recommendations.

Elizabeth Bear has created a secondary world just as in depth as the English/Norse based fantasy of Tolkien, but instead built off the mythology and traditions of the Mongolian Empire and the silk road. All with great characters and compelling stories. Some of the best characters are horses. I was blown away.

This book has nothing that really grabs you. The premise of ghostly raiders running around sounds cool until it is explained. Then it just feels bland.
It felt like the author was trying to capture the comes off other fantasy but missed the mark. she has potential I think, so I will try other books of here at a later date. As an example, The author at one point spends a whole page on drawing and firing a bow but there was no actual tension or gripping moment.

The world building is detailed, exotic, and unique. The writing is beautiful. But I found the language daunting and hard to attach names to characters. This is an interesting fantasy book if you like Mongolian Steppe culture and are good at remembering foreign names. Those were problems for me.

There are a lot of pieces within this story that I loved. Unfortunately, as a whole I wasn't blown away or compelled to finish, even though I eventually did. I also had a difficult time getting used to the narrator. Her voice and way of performing made things kinda cheesy for me and I thought she'd be better at other reading levels, like children's books- which isn't bad. I simply didn't think her way of narrating meshed with the story. I had high hopes but they weren't completely met.

This reading is terrible.

I think I would like this story if I read it, or if it had a better reader. Ms. Ciulla sounds like she's reading to children. I don't need an overly dramatic performance, but please try to reflect at least a little bit of the gravity of the passages that you are reading. I'm not going to finish listening to this. Sorry, Ms. Bear, I like your books.

I cannot bring myself to care about any of the characters. Poor storytelling, lackluster prose.

If you need another world, try this

World-building: can be enthralling (Tolkien), can be overwhelming (D. Eddings), can be mundane (Bear). This book has a few recognizable names, but most elements are unique to the story so the reader has to really pay attention; except that one could just read the parallel narratives and ignore how they fit together. Maybe on the second reading I can figure out the sky thing. The writing style seeks the older audience - for example, a lot more adjectives than necessary. The details accorded to cloth, clothing, food and disembowelment definitely make this a girls book. YA readers enthralled by the early lesson on what a girl should do on the first date will be disappointed in finding no follow-up lessons (well, there is a flashing scene). It is the rare narrator who can voice multiple characters, particularly of the other gender; Ciulla is fine.