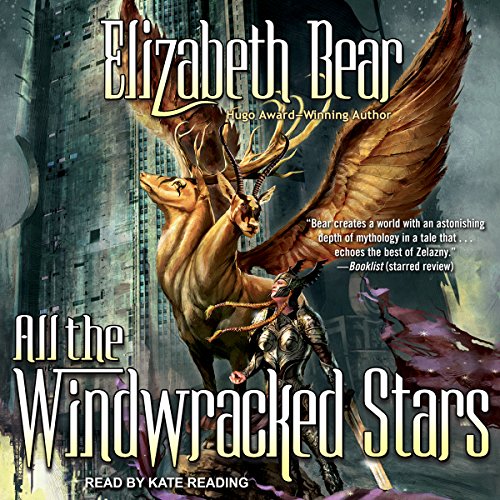 By: Elizabeth Bear
Narrated by: Michael Kramer,Kate Reading
Try for $0.00

From the author of The Stone in the Skull

It all began with Ragnarok, with the Children of the Light and the Tarnished ones battling to the death in the ice and the dark. At the end of the long battle, one Valkyrie survived, wounded, and one valraven - the steeds of the valkyrie. Because they lived, Valdyrgard was not wholly destroyed. Because the valraven was transformed in the last miracle offered to a Child of the Light, Valdyrgard was changed to a world where magic and technology worked hand in hand. Two-thousand five hundred years later, Muire is in the last city on the dying planet, where the Technomancer rules what's left of humanity. She's caught sight of someone she has not seen since the Last Battle: Mingan the Wolf is hunting in her city.

What listeners say about All the Windwracked Stars

The narration is awesome, to be expected from these two.

Even so, the story disappointed. It is disjointed, hard to follow. The graphic, violent sex scenes are disturbing. So much so that I could not complete the book. I will not return to this author. I will not recommend the book to anyone else.

This is one book that draws you in a beautiful world. Thank you Liz Bear.

It took a while for me to get into the audiobook. I restarted it 3 times as I would lose focus during the story. But, it gets moving and is an interesting tale that took me to a world(s) that I'm glad I was able to visit. The narrators are the best and 2 of my 3 favorites, and they do not disappoint with the telling of this story. I intend to purchase the next book.

A good listen even though I found at times it was hard to follow. I do enjoy these types of books and tend to get caught up in the story. Having said that I could see how someone not really paying attention could easily become lost and not enjoy the story line.