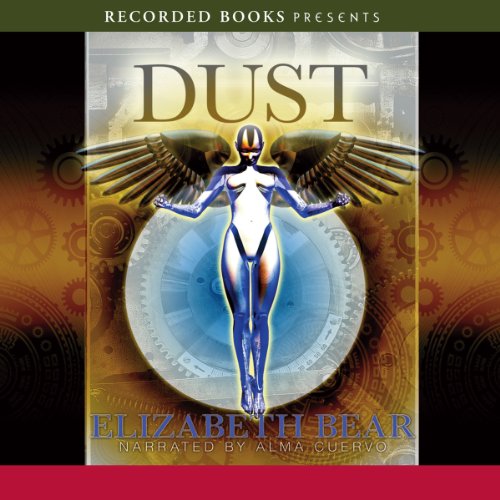 By: Elizabeth Bear
Narrated by: Alma Cuervo
Try for $0.00

What listeners say about Dust

This was my first audio book, as well as my first Elizabeth Bear book. The writing was exquisitely well crafted; her prose was simply wonderful to listen to and, because of this, I plan to read it as well. The story was compelling, leading the reader on to understand the complexities of "the world" that was the stranded generation ship, with its ship mind/AI fragmented into pieces, the "angels". Very ingenious and well done. Without burdening the reader with endless technical descriptions, she illuminates the characters and brings them into vivid focus. The narrator was perfect.

A very different kind of story.

Whether one feels the work is good or bad, there are a lot of the same and similar things out there to read in Sci-Fi and Fantasy. Can you tell the difference in Christine Feehan and Sherrilyn Kenyon? I like them both, but I can't. That was why I was attracted to Elizabeth Bear's "Dust." It was so very different from much of the work out there and it was quite interesting in its differences. As someone who reads and listens (in combination), to approximately 50 to 60 books a year, I loved that I didn't guess correctly where the story in "Dust" was going. I will definitely look out for more from this author. I was also pleasantly surprised that it didn't seem to be set up as a muti-novel story either. It was refreshing to be able to finish a complete story without having to wait a year between each novel.

This book took one of the old standards of Science Fiction; The generation ship, evolved it into a
modern thoughtful story. Adventure, Hi-Science Fiction and some love thrown in. Narration was good, although I rarely have a problem with the
narrators on audio books. I am astounded at the number of reviewers who rip on the narrators.
But I digress... This was a good story well told.
I almost wish for a sequel even though it is refreshing to read/listen to a sci fi book that
is not multi book.

A very, very strange book. Not for everyone

What got me to read this is the generation ship/ big ship angle. I am a total sucker for novels in this vein, and that's the only reason I got through this and the second book in the series, Chill.

As strange and otherworldly as the characters are none of them are really likable or well developed. They hang on the strength of their unusualness, aided by a fairly well developed set of technological enhancements that provide enough interesting aspects to keep you going to a point. To the author's credit the setting and various technologies are interesting and mysterious, yet they aren't enough to hide the sheer strangeness of the interactions between characters. There is a sheen of ill-defined sexuality that is hinted at but never well developed enough. The two main characters have a depth and connection that is unwarranted and inexplicable given the background provided.

If, like me, generation ships and arks are your thing, then the draw of this setting and the mysteries the ship holds will be enough to gloss over the unconventional aspects of the rest of the novel.

Dust is a mildly interesting variation on the generation ship theme. A lost and damaged interstellar space ship circling an unstable star sets the backdrop for a band of space travelers that have "evolved" well beyond human. The timeframe is far future with sophisticated AIs, nanotech, and genetic engineering capable of growing human wings. We begin some time after the accident that has precipitated current events. The ship's crew has bifurcated into two competing groups (former officers and engineers) with an almost Medieval orientation. The original AI has been forced to divide into multiple entities responsible for maintaining unique elements of the ship while at the same time assisting different groups in an attempt to reintegrate and take back total control of the vessel. We follow the journey of two women as they traverse the ship in an attempt to prevent an all out war.

The characters are not well developed and largely unremarkable, except for perhaps the AIs. The whole story has the feel of a shotgun wedding between a sci-fi setting and a vampire romance tale with a hint of homo-erotic innuendos along the way. One gets the feeling that effort was required to prevent choosing a fantasy fork as the story progresses. The ending is less climatic and moreso satisfaction that everything works out, sort of.

The narration is passable, but the flat affect for most of the story does not lend itself for much opportunity to display much in the way of range.

A Challenging Book, may be trying to do too much.

This was quite an odd book. Set in a disabled generation ship that has been stuck in a dying binary star-system for over half a millennium, the human population has devolved into two highly unequal classes, who have further divided into two primary, opposing factions. Simultaneously, the ships AI has fractured into several, strangely anthropomorphic and oddly possessive entities referred to as "Angels" who seem to represent alphas (males?) who are each trying to be the ultimate AI that takes the ship forward in the future. At it's most basic, the story is a complex fable about the divisions between science and religion. However, it also explores power in interpersonal relationships to a great extent. In summary: I think the book is trying to address an awful lot issues with an awful lot of symbology at once. The premise is very good, the world is very cleverly crafted, the visual narrative is very rich, and some the characters were sadly a little flat. The flow can shift abruptly at times, which makes it a bit challenging for an audio book and may result in some rewinding. It was not until about 2/3 of the way into the book that it really started to gel but after that it seemed to flow better. It's good enough that I'm going to read the second book.

<i>Jacob's Ladder</i> is a generation ship, launched by an unusual religious cult, now stranded in orbit around a double star. After 500 years of drifting in orbit, the ship damaged and the the ship's AI fragmented into multiple units that have been dubbed Angels, the ship's population is divided into separate, rival populations in different parts of the ship. Rule and Engine are about to go to war. There's a struggle over who will be the new Commodore.

But the stars are heading toward going nova very soon, and the Angels, with a much better understanding of the ship's danger than the human population have, are engaged in their own struggle. They need to rejoin into a unified whole that can truly operate the somewhat-repaired ship, but each wants to be the dominant personality, too.

In the midst of all this, we meet Rien, a Mean, or servant, in Rule, and Perceval, a knight of of Engine.

What Rien doesn't know at first, but Perceval does, is that they are sisters, intentionally conceived to be hostages. When Perceval is captured during a clash between Rule and Engine, Rien is the one assigned to care for her in what are the last couple of days before Arianne, head of Rule, consumes the symbionts that will give her all of Perceval's knowledge and memories.

What follows is a wild adventure in which we, along with Rien, learn a great deal more about the world of <i>Jacob's Ladder</i>, the intentions of their founders, and the threats the ship faces. Rien, Perceval, their relatives, and the AIs all learn, grow, and face major choices and losses. It's an exciting, interesting, satisfying story.

It's the first of a trilogy, but this part of the story comes to a satisfying conclusion of its own, while leaving room for the arc of the rest of the trilogy.

it starts slow but stick with it!

I've read some of her newer books and I love the fact that they are full of context of different types of personalities and people and progressive thoughts such as including people of different genders and different sexualities and different identifications... And I didn't know if that was going to be true in one of her older books... still there it's just much more subtle... The world wasn't really ready for it back then. this trilogy though is very good it's very well done and it's interesting how whoever chooses the readers for these books... I just really appreciate the thought that goes into their choice for readers.

I didn't really know what this book was about when I started it and I didn't kind of understand how to take it in... kind of similar to Firefly in the sense of mixing genres and sometimes it's hard to get your brain around... but it's very well done here and the reason that it's done is actually explained by the story which makes it a lot better for me.

so it seems to be taking place on a starship in the distant future but at the same time everyone seems to be living at the feudal level... like there are the ruling class and then there are the fiefs, etc. it's got a lot of religious vernacular in it but it's capitalizing on the idea that any distant technology will be perceived as magic... And that is really evident here. I really wasn't certain if I was going to enjoy this but I really ended up getting sucked in and I'm definitely going to read the other books in this series to see how it all turns out.

I like Elizabeth Bear but she stretched too much in this book. It reads like a sequel but there is no first book.

Not my si-fi grade

I guess I'm just not up to the level of this space fiction. I've listened and read - and still just didn't "Get it". The reader was great but I had real difficulty following the narrative. This may be a super book for those immersed in space fiction - but it wasn't for me. I have read another of Elizabeth Bear's book and like it.

I could not get into this world or story at all. The biblical underpinnings did not help this listener. Not for me.

Too much fantasy and poorly explained supernatural-like nonsense to be considered sci fi. Fantasy set in space is still fantasy.

A world so far away, isolated and evolving

The trilogy has left a strong impression on me and I find myself looking forward to Elizabeth’s next books. Her ability to create a rich, strange and wonderful, yet believable world is outstanding. You my be disoriented at first, but that is only natural in a generation ship hundreds of years into its journey.