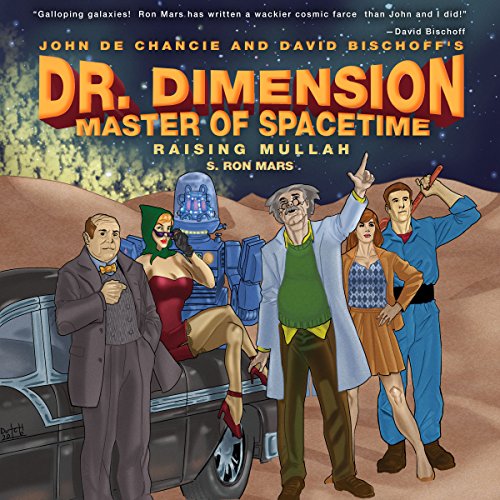 Dr. Demetrios Demopoulus and his gang of time traveling misfits are back, and this time they're trying really hard to keep the universe from going kaput. Or are they? Helping them stay alive is Erob, a robot who suffers from a split personality disorder. Service with a smile is not his strength, but if you need to threaten an unsuspecting humanoid or two, he's your man, er, robot.

Their mission, should they wish to accept it, is to travel back to 1950s Iran and flush out alien meddlers. Why Iran? Iran so far way? Let's just say it's a mystery involving the jingoistic machinations of oil producing nations, a certain foreign intelligence service, and a few inter-dimensional Sasquatch. Sound familiar? It should, it's based on a true story. Well, most of it, anyway.

Note: This novella is an extension of the Dr. Dimension series originally written by Charles DeChancie and David Bischoff. You don't need to listen to the first two novels before listening to this one, but the authors would sure appreciate it. It also proves you're a true mensch.