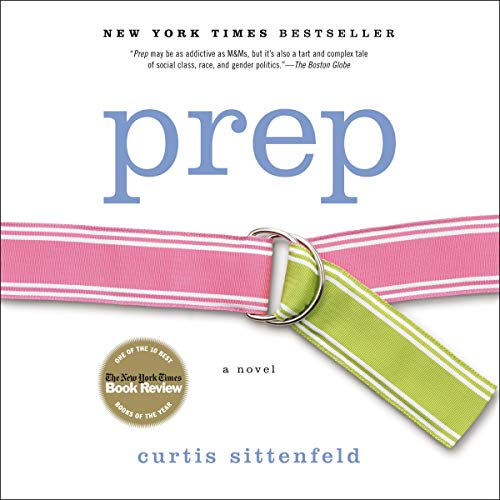 By: Curtis Sittenfeld
Narrated by: Jorjeana Marie
Try for $0.00

An insightful, achingly funny coming-of-age story, as well as a brilliant dissection of class, race, and gender in a hothouse of adolescent angst and ambition.

Lee Fiora is an intelligent, observant 14-year-old when her father drops her off in front of her dorm at the prestigious Ault School in Massachusetts. She leaves her animated, affectionate family in South Bend, Indiana, at least in part because of the boarding school’s glossy brochure, in which boys in sweaters chat in front of old brick buildings, girls in kilts hold lacrosse sticks on pristinely mown athletic fields, and everyone sings hymns in chapel.

As Lee soon learns, Ault is a cloistered world of jaded, attractive teenagers who spend summers on Nantucket and speak in their own clever shorthand. Both intimidated and fascinated by her classmates, Lee becomes a shrewd observer of - and, ultimately, a participant in - their rituals and mores. As a scholarship student, she constantly feels like an outsider and is both drawn to and repelled by other loners. By the time she’s a senior, Lee has created a hard-won place for herself at Ault. But when her behavior takes a self-destructive and highly public turn, her carefully crafted identity within the community is shattered.

Ultimately, Lee’s experiences - complicated relationships with teachers; intense friendships with other girls; an all-consuming preoccupation with a classmate who is less than a boyfriend and more than a crush; conflicts with her parents, from whom Lee feels increasingly distant - coalesce into a singular portrait of the painful and thrilling adolescence universal to us all.

“Curtis Sittenfeld is a young writer with a crazy amount of talent. Her sharp and economical prose reminds us of Joan Didion and Tobias Wolff. Like them, she has a sly and potent wit, which cuts unexpectedly - but often - through the placid surface of her prose. Her voice is strong and clear, her moral compass steady; I’d believe anything she told me.” (Dave Eggers, author of A Heartbreaking Work of Staggering Genius)

“Speaking in a voice as authentic as Salinger’s Holden Caulfield and McCullers’ Mick Kelly, Curtis Sittenfeld’s Lee Fiora tells unsugared truths about adolescence, alienation, and the sociology of privilege. Prep’s every sentence rings true. Sittenfeld is a rising star.” (Wally Lamb, author of She’s Come Undone and I Know This Much Is True)

“In her deeply involving first novel, Curtis Sittenfeld invites us inside the fearsome echo chamber of adolescent self-consciousness. But Prep is more than a coming of age story - it’s a study of social class in America, and Sittenfeld renders it with astonishing deftness and clarity.” (Jennifer Egan, author of Look at Me)

What listeners say about Prep

17 hours of no plot and no story about an unlikable teen girl being anxious around people and miserable to them.

I have to admit I’m a little baffled as to why this book received any acclaim. The main character is at times highly identifiable in her social anxiety but is most often a shallow, self-obsessed, severely unlikable girl with no arc, no story, and no plot other than literally “Lee goes to high school.” Heap on top of that how desperate she is for a boy to like her and how she lets herself be used by him and she becomes as pathetic as she is irritating without ever getting beyond it or learning from it at the book’s abrupt conclusion.
How is the book 17 hours long with no plot? It’s unending social observation and commentary of her classmates. Some people really enjoy that, but for me the author could have crystallized the jewels from this down to a short story and created something special. It’s a book about a girl who’s on the periphery of everything, and that could have been really clever, but it misses the mark (in my opinion) mostly by being so long about someone so miserable all while so little actually happens.
The realism is the one area where this book really shines so if smeared snot and bowel movement metaphors are your thing, you will probably genuinely appreciate this book. The author creates a very real environment and nothing is taboo. She nails certain aspects of social anxiety, but not everyone who struggles with that is a rude and miserable wretch. The writing itself is solid but inconsistent and unexceptional.
I never would have been able to finish it if I hadn’t been reading it for a group.
Will definitely never again read something by this author.

The narrator is good but a little slow, however if you speed her up to 1.25, she becomes excellent.

This Audiobook has become my go-to listen while I'm falling asleep. The story & narration are superb.

I learned about this book from a “if you liked this try that” article and was half way through before I realized it was something of a cult classic. The story perhaps dragged a bit in the middle chapters but really captures how so many of us felt in high school, years that we’re told are supposed to be the best of our lives. The thing I really loved about the story is the author never gives in to the cliche or expected - whenever you think you know what’s going to happen, the author takes a left turn, but not in a way that feels forced or contrived, but rather in a way that feels like what would happen in real life. The narrator was also really well chosen for the inner dialogue of a teen girl.

I did not want to miss a word!

This story of a teen aged girl from a middle class midwestern family who attends an eastern boarding school for her high school years has so many “book group discussion” topics. These include class, ethnicity, sex that means one thing for our heroine and another for the boy, a 4 year long crush, issues with parents, teachers, friends and the rigorous academics at a prestigious prep school. It is also a good example of what we hope our teenagers will one day understand that so much teenage angst will dissipate in college and beyond. The reader lives through all of this with Lee and, I believe, hopes that all will turn out well for this kind and introspective young woman, so sensitively narrated on Audible. I was sorry when the story ended.

At first when I was listening to the spec I thought it was kind of boring and going nowhere. But as the story and narrative developed it got fascinating and ended up being a very interesting perspective on a prep school.

I started the book with great interest, but found the story so predictable and sappy that I couldn’t continue to listen.

Great story not as great production

This was a very engaging book, however the production was terrible. The first word of almost every sentence was cut off. It was hard to understand at times because sometimes that first word was important to the rest of the sentence. After about an hour of this I restarted the book in case it was something on my end. But the problem persisted and I just had to struggle through. This book took me longer than usual because I was so annoyed by the production that I didn’t stay as engaged as I probably would have been if that weren’t happening.