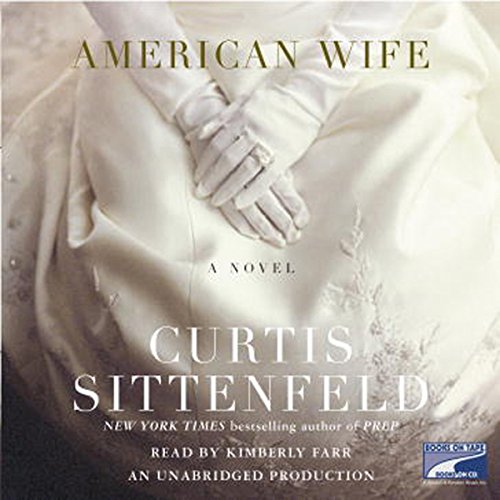 By: Curtis Sittenfeld
Narrated by: Kimberly Farr
Try for $0.00

New York Times best seller. A gorgeously written novel that weaves class, wealth, race, and fate into a brilliant portrait of a first lady - from the author of Rodham and Eligible.

Named one of the 10 best books of the year: Time - People - Entertainment Weekly.

A kind, bookish only child born in the 1940s, Alice Lindgren has no idea that she will one day end up in the White House, married to the president. In her small Wisconsin hometown she learns the virtues of politeness, but a tragic accident when she is 17 shatters her identity and changes the trajectory of her life. More than a decade later, when the charismatic son of a powerful Republican family sweeps her off her feet, she is surprised to find herself admitted into a world of privilege.

And when her husband unexpectedly becomes governor and then president, she discovers that she is married to a man she both loves and fundamentally disagrees with - and that her private beliefs increasingly run against her public persona. As her husband’s presidency enters its second term, Alice must confront contradictions years in the making and face questions nearly impossible to answer.

What listeners say about American Wife

Too long and very preachy.

This book is much too long and by the time I was half way through, I really disliked the main character and her over analyzing of her every thought. Her self-righteousness became so obnoxious! I have enjoyed other Sittenfield books, but this was disappointing and needed major editing.
The narrator did an excellent job.

Held my attention the entire way through. Drops off a bit toward the end but i can overlook that. Who cares if it's based on Laura Bush? It's a good story. STORY. As in fiction. I enjoyed it.

Story of a Marriage

I was so surprised at how much I liked the little details in this relationship. I might normally skip ahead, but these details are what brought the characters to life for me. It doesn't matter if this book was based upon real people in our history or not. It was a fascinating book.

I kept listening and waiting to fall in love with this story. Thinking I would... nope. I honestly didn’t enjoy it one bit. Writing was good but I just didn’t like the story. Disappointed.

Although I wasn't a big fan of "Prep," author Curtis Sittenfeld does a great job with this fictionalized account of the Bush clan and Laura Bush. I found it surprisingly engrossing. I don't see at as fawning, as some reviewers have, but as a different perspective on the events of the last eight years - whether or not you are a fan of the Bushes. I also found her portrait of the Blackwell clan at Halcyon hysterical. You could actuially see these events happening. With the dead-on portraits Sittenfeld creates, it can be hard to remember that this is a work of fiction, after all. As with "Prep," I find a lot the prose in Sittenfeld's bedroom scenes to be somewhat jarring. It doesn't always seem necessary to go there. I did find the Alice character to be passive to the point of irritation but also finished the book wanting to know more about her model, the real Laura Bush.

This was is truly well written book with fantastic narration. The first 3/4 is especially engaging.

This was very interesting storytelling no matter how closely it adhered to facts regarding Laura and George. The parallels were nevertheless evident. I enjoyed this book very much.

Wow...what a book. The author weaves an intricate tapestry of characters, plots and history. Not politically offensive.....get the unabridged version...it's about 21 hours, but I found it hard to stop listening. Terrific writing. Worth the money/credit. I'm a new fan for sure!

I enjoyed this book thoroughly - mostly because the writer is excellent. I sometimes agree with the hype about the fictionalization of real people and questioned at first whether or not Laura Bush would be a particularly charismatic subject, but I was won over. I think it's because of the combination of superb writing and thorough research. It's clear from the get-go that it's fiction, conjecture, just possibilities. I didn't come away with more sympathy for George W. Bush but with some understanding at least as to why she might see something in him and I also think more highly of her. Excellent narration as well.

I absolutely loved this title for many reasons. The reader was excellent and some might find the story lengthy but I feel it was worth it from beginning to end. The story was one that was so relevant to myself from the early teens through my 30's. The relationships, family struggles and society expectations always rang so true. Loved it. Hope you will too.