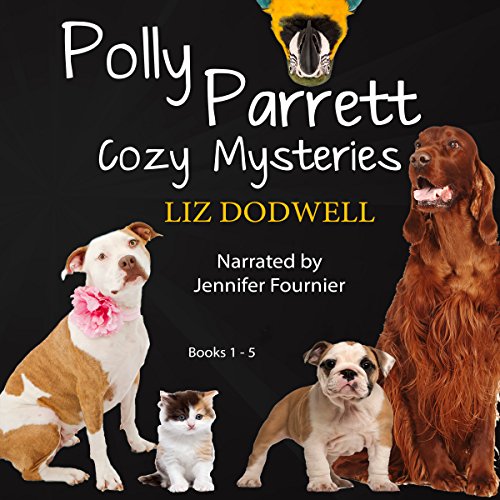 By: Liz Dodwell
Narrated by: Jennifer Fournier
Try for $0.00

Doggone Christmas: "Control that dog or I'll shoot him." Those are the words that spur Polly Parrett to action in this riveting and hilarious cozy mystery. A cute Christmas murder mystery about pets and a special dog, you'll instantly be drawn into the story.

The Christmas Kitten: Polly Parrett finds herself in the midst of another cozy murder mystery. This time it involves two little girls, a wicked stepmother, and a missing father. Oh, and Christmas is almost here.

Bird Brain: Polly Parrett meets Polly parrot. Together, can they solve a murder mystery? Polly finds herself having to cope with a moody macaw, a volatile new resident at her mother's halfway house for veterans, and oh yeah, a dead body.

Seeing Red: Why did the dog get so angry? And just who is Heather Haggerty? Mallowapple's most famous pet-sitter is in the thick of it again. She can't seem to get away from dead bodies. It's as if murder - or murderers - follow her around.

The Christmas Puppy: What do bulldog puppies and garden gnomes have to do with a dead Santa Claus? Once again intrepid pet-sitter, Polly Parrett, finds herself in the thick of a murder investigation in this fun cozy mystery.

We first meet Polly in Doggone Christmas, where Polly is dealing with trying to help her mother, made a paraplegic in a horse jumping accident and left so bitter that she drove her husband away. Polly is in the process of trying to relocate her mother, Edwina, from her 10-acre property to a more manageable home when she meets the attractive Tyler, the realtor helping with her case. Together they discover a homeless veteran who seems to be framed for a murder. Rooster has not been able to make use of homeless or veterans' facilities because they will not allow his beloved pit bull, his best friend, to join him. With Elaine scheduled to be euthanized, the pressure is on for Polly to find the true killer and save Elaine's life. The book concludes with Edwina's deciding to turn her large property into a halfway house for veterans that welcomes all pets, and Rooster comes on as manager of the facility.

In The Christmas Kitten, a tiny kitten wearing a gold bracelet as a necklace shows up at the doorstep of Welcome Home, the home for veterans Edwina, Polly, Tyler, and Rooster have established. Then they find two scared little girls, daughters of an active member of the special forces, with the girls thinking they may have killed their stepmother, who epitomizes the image of &quot;evil stepmother.&quot; But someone is after the girls too. Polly and company must find the truth behind the stepmother's death and whoever is after the girls to hurt them.

In Bird Brain, Polly Parrett is giving a bequest of Polly the parrot. With the bird comes the home of the bird's owner, and one of the residents of Welcome Home takes over the care of Polly the parrot, who revives amazingly under his care. But someone seems to be looking for something in the house, and the bird helps them find a valuable piece in the house.

Seeing Red features another murder mystery for Polly when the reaction of the Irish setter, Red, makes Polly certain that his owner's death was murder, not an accident as the police think. There seems to be some mysterious connection to the 30-year-old disappearance of a young child. Further, Welcome Home faces challenges as the inspector from the VA keeps giving them a hard time with their renovation of the barns to dorms for the residents, causing them to lose their funding from the VA. The book has unique intrigue to it.

In the final book, The Christmas Puppy, the little bulldog puppy Mule, seeking warmth, accidentally sets off the train, and the man dressed as Santa Claus sitting in it is found to be murdered. And he turns out to be the man who tried to drive Welcome Home out of business in order to get their land instead of the man supposed to be playing Santa. The open house gets closed until they can find the murderer, and for once, Edwina announces that she intends for the people from Welcome Home to track down the killer rather than let the police do it. Will they have a merry Christmas or live in fear of a murderer in their midst?

This compilation was a true delight to listen to, with plenty of fun details about animals. It is obvious that Dodwell loves animals herself and knows their fun quirks well. Besides loving the elements of the animals, I especially appreciated the way the book honors this country's veterans, many of whom have been ill-treated by the country for whom they have suffered. It reminds us that we need to do more for such heroes and also points out the problems that homeless are frequently not welcomed into shelters if they have pets, despite the way pets so often prove to be people's tie to sanity and love.

Jennifer Fournier narrates the audiobook of this compilation and adds to its enjoyment. She voices the animals ably and seems suited to this particular book, which is gentle and sweet.

The Polly Barrett Pet-Sitter Cozy Mystery Collection is a great cozy mystery suitable for all ages. It is entirely clean so appropriate for children, who will enjoy all the animal stories along with the mysteries. And adults will appreciate the fun elements of the mysteries and the celebration of veterans who have given their lives, their limbs (there is a one-legged man with a parrot on his shoulder), and their sanity to this country. This book is well-written and deserves five stars!

Its a fun read with several stories right around Christmas

It held my interest

These stories definitely fall into the "cozy" category. They are not anything super thought provoking, but are a nice diversion when commuting or doing other tasks.

They're good for what they are--cozy stories. With pets. Cute pets.

I thought the narrator did a terrific job. She has a pleasant voice--soothing, but not monotonous.

A nice value for your credit if you're looking for a pleasant read (with pets).

This is a great set that is written by Liz Dodwell and Narrated by Jennifer Fournier. This is a great book with a wonderful story and well developed characters. The story flowed very well and was very enjoyable. This book will keep you reading long into the night and you will not want to put this book down until you finish. This was such a great read and full of surprises. The narrator did a wonderful job with this book. She did a great job with the different voices of each character in this book. It was very easy to listen to and I didn’t want to stop listening until the end. If you are looking for a great book with well-developed characters then you need to listen to this book. I am looking forward to listening to the next book by this author and narrator.

These story are cute and funny. The main character, Polly, is quirky and unusual and it was enjoyable to just sit back and listen to her perspective on everything. They are true cozy mysteries, so if you are looking for a serious mystery that keeps you guessing until the end, these aren't the stories for you. A few of them caught me by surprise, but most of them I had figured out before the story wrapped up. Regardless, they were a fun listen.

The Narrator, Jennifer Fournier, reads the story perfectly. She has a way of expressing Polly's unusual personality and thoughts that comes across just right for the character. I quite enjoyed her and will look for other books by the narrator. She was easy to listen to and the changes in her voice when expressing Polly's joy, sadness or happiness were just perfect and suited Polly's personality just right.

This is a great series if you are looking for just light, fun mysteries.

Ugh! I was all set to LOVE this series, and not long into it Polly Parrett is looking at a young guy's butt (a** in her words) and talking about how tight it was . . . and sympathizing with her father over the break up of her parents' thirty year marriage because of her mother's whininess. Of all the things . . . Not my idea of a good book in the least. Its not cute, its not nice, and its just sad in my opinion. :(

This is a fun collection of the first five stories in the Polly Parrett Pet-Sitter Cozy Mysteries series. Each story is stand alone, but they definitely follow a timeline. I'd recommend listening or reading them in order.

Liz Dodwell has done a great job of developing Polly into quite the quirky individual. I found myself chuckling out load at some of the situations she got into.

It was so easy to get drawn into the stories with Jennifer Fournier narrating. She really brought Polly (and all the other characters) to life with just the right level of emotion and expressions.

I was voluntarily provided this review copy audiobook at no charge by the narrator, author or publisher.

Liked these stories! Plots were good enough to keep me guessing! And I didn't get all of them right! Loved that the animals didn't get hurt too bad..
the narration could have been better. As far as getting into character with some of it. The bad guy shouldn't sound high pitched and whiny.. the mother should be more stern sounding like they portray her to be.
I would recommend this book for sure!

An excellent collection, whether you read or listen to it!

While I'd read nearly all these books separately, I had the opportunity to listen to them as an audiobook box-set, and I'm so glad I took it. Jennifer Fournier, the narrator, does an excellent job bringing the stories to life, and you really feel drawn into the world of Polly and her family. With a Cozy mystery style - meaning no sex, excessive violence or strong language - the books are suitable for everyone from young adults upwards, and I'd definitely recommend them to anyone who loves animals and cozy mysteries!
NB I received a complimentary copy of this book, but I always give an HONEST review based wholly on my own opinions