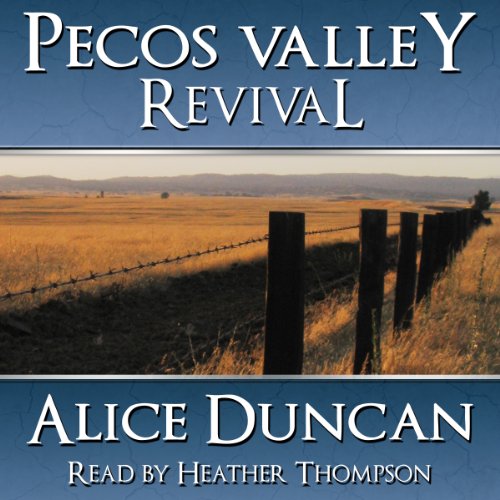 By: Alice Duncan
Narrated by: Heather Thompson
Try for $0.00

It's early October 1923, and three interesting things are going on in the generally dull town of Rosedale, New Mexico: the fall cattle drive, the fall rodeo, and a tent revival.

Annabelle Blue is excited about the first two events. The last one might be okay if it weren't for the Reverend Milo Strickland's sister, Esther, whose ethereal loveliness has captivated all the men in town, including Annabelle's long-time beau, Phil Gunderson.

In spite of this, Annabelle pitches in and helps prepare for the rodeo, which is always accompanied by a community-wide party and barbecue. This year's rodeo and barbecue are being held at the Gundersons' ranch, about twelve miles west of Rosedale.

Although Phil seems to hang around with Esther a lot more than Annabelle deems proper, she enjoys the rodeo with her best friend, Myrtle Howell-until one of the stars of the rodeo, Kenny Sawyer, falls ill and later dies.

Shocked to learn that Kenny was poisoned, Annabelle begins to do some snooping. There are a plethora of suspects to choose from. Unfortunately, those suspects include her own brother-in-law, who appears to be enamored of a woman other than Annabelle's sister; Kenny Sawyer's erstwhile lady love; the husband of her brother-in-law's assumed lover; and even Annabelle's horrid twelve-year-old brother, Jack.

When Hazel Fish, the worst gossip in Rosedale, is killed after Annabelle gives in to her friend Myrtle's wheedling and goes to a revival meeting, life in Rosedale becomes downright frightening.

Hooked me for the series!

Would you listen to Pecos Valley Revival again? Why?

I'm not sure I would listen to this particular book in the series again since it was a fairly quick read and the problem with whodunits is that once you know "who dun it," the suspense goes out of the book. However, I've learned that the same narrator should be doing the next book so I definitely plan to get that one. I may even go back and listen to the first one in the series even though it had a different narrator. It was a fun story and I like Annabelle, the protagonist.

The narrator brought vibrancy to the main character and gave the story an energy that made listening to it enjoyable and addicting. There was a slight tunnel effect in some of the chapters, but not enough for me to dock a star as it didn't prevent me from enjoying the story or the narration.

I was very pleasantly surprised when it made me laugh. This book was a bit of a stretch for me. I read it based on a recommendation even though it was out of my normal genres. I was laughing out loud within the first 20 minutes.

I docked the story one star because there is sooo much repetitive observation of the people in the town and as well as obsessing on the possible romances and jiltings... and then the resolution is over like that. *snaps fingers* It just seemed like for putting that much effort into listening to Annabelle obsess over various people, there should have been more of the mystery, drama and action near the end. But things are barely getting jumping with the mystery before you find out whodunit. I would have enjoyed more of a balance between action and exposition. Still, an enjoyable quick listen.