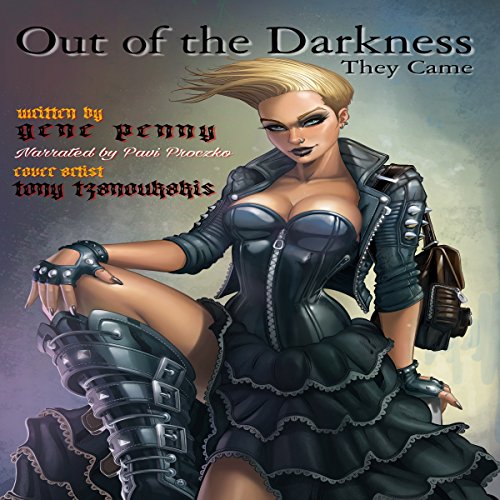 Out of the Darkness They Came

Out of the Darkness They Came

Tatiana, Claudia, Calvin, and Sasha have been lured to school by a clever clairvoyant named Jonas. Jonas Goodwin's test is to uncover each of their darkest, most perverted secrets. If Jonas can discover how each teen connects to the biggest catastrophe to rock the tiny suburb of Seville, Texas, he will earn his place at the grim reaper's right hand.

Except, there is more at stake than a mere test.

Lucifer is not one to be shortchanged or denied. The reaper has come up short on his next delivery of souls. It is now up to the grim reaper's newest protégé to fill the devil's quota of souls on that next train heading downtown…or else.

What made the experience of listening to Out of the Darkness They Came the most enjoyable?

Out of the Darkness They Came began with brief back stories on the main characters in the book. At first, I didn't understand how each character fit into the story but I have to say the back stories were so interesting that I found myself wanting to know more. The monster roaming the school hallway was super creepy. All in all, I highly recommend this audio book!

I think this book is perfect for any horror fan looking for something that isn’t played out, and for fans of Southern horrors in particular. I thoroughly enjoyed these intertwined stories; the characters are all delightfully unsavory, there is plenty of profanity, and overall, the book is just written so well! I came across so many great lines while listening to Out of the Darkness They Came, and I was glued to my audible app until the very end. This book is a fantastic horror story, and it most definitely has a re-listen quality.

This is the first book I’ve listened to Pavi Proczko, and it certainly won’t be the last. His performance is outstanding. I’m so surprised he hasn’t narrated more books. Mr.Proczko, if you see this- please narrate more horror novels!

I really enjoyed this book .it was certainly different. so much darkness. I would like to read other books by this author I received this book from the publisher, author and or narrator for a honest review and unbiased options via audio book boom dot com

out of Darkness They Came

Unusual horror story, keeps your interest from the first page to the end

The narration was extremely good

I received this audio in exchange for an honest unbiased review

I read Black Rain by this author and decided to pick up this book. Wow. Every character in Out of the Darkness has some tragically twisted personality flaw which made it hard to stop listening. If you're looking for unusual horror off the beaten path, I highly recommend this book!

Would you listen to Out of the Darkness They Came again? Why?

No. Most Horror stories are good for one listen. You know what the big shocks are surprises are once you have heard them and this one is no different. It was a decent story but would get boring after multiple times hearing it.

Jonas. He was the one who was pulling all the strings from the background. He was the kid in school discounted due to his looks but really in the end had the true power.

What does Pavi Proczko bring to the story that you wouldn’t experience if you just read the book?

Pavi Proczko brings real feelings for fear, hope, and life to each character. Each character has a different voice, tone, and tempo and it makes for a great time to listen to the story.

If you could rename Out of the Darkness They Came, what would you call it?

"This review copy audiobook was provided by the author/narrator/publisher free of charge via Audiobook Boom."

At first I was really confused but I’m glad I stuck to it. It has different back stories for each character before everything gets pulled in together. I really enjoyed this book it has everything you would want in a horror book.. I even caught myself grimacing a few times.

“This audiobook was provided by the author, narrator, or publisher at no cost in exchange for an unbiased review courtesy of Audiobookboom”

Every character in Out of the Darkness has some tragically twisted personality flaw which made it hard to stop listening. If you're looking for unusual horror off the beaten path, I highly recommend this book.

I had no idea where it was going at first, but the writing style and amazing narration kept me riveted. It centers around a group of teenagers, each carrying dark secrets, that are destined to come together at a high school during a specific point in time.

The author, Mr. Penny, does a great job filling in backstories and adding depth to the characters. Once the story started to gel, I was pleasantly surprised how suspenseful the story became.

Warning: there are some graphic sex scenes - one really blew me away!

Mr. Proczko is an amazing narrator. His natural voice tone is perfect for narrating. His ability to create independent voices for each character amazes me, and I will strive to attain his level as a narrator.

This audio book was gifted to me by the author at no cost in exchange for an unbiased review.

The story had far more sex in it than most any non-erotic book I've ever read or listened to. Was a very difficult story to get into. Had some interesting things like possession and school monsters.I was voluntarily provided this free review copy audiobook by the author, narrator, or publisher.