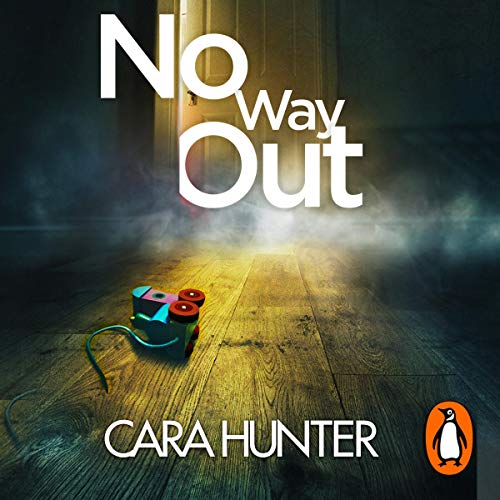 By: Cara Hunter
Narrated by: Lee Ingleby,Emma Cunniffe
Try for $0.00

Did you see anything on the night the Esmond family were murdered?

It's one of the most disturbing cases DI Fawley has ever worked.

The Christmas holidays, and two children have just been pulled from the wreckage of their burning home in North Oxford. The toddler is dead, and his brother is soon fighting for his life.

Why were they left in the house alone? Where is their mother, and why is their father not answering his phone?

Because this fire wasn't an accident.

"Cara Hunter is a brilliant plotter, but it's her masterfully drawn characters that really make her novels stand out." (Rachel Abbott)

"The two [narrators] crisscross between points of view and newspaper accounts, enhancing the drama of a fast-moving police procedural that will keep you hooked to your earbuds." (The Times)

What listeners say about No Way Out

Really enjoyed this book just like the previous ones. Definitely worth a credit and looking forward to reading the next.

I have been in love with Cara Hunter’s DI Fawley series since the first one, ‘Close To Home.’ While they often follow the familiar past and present format of so many of their genre, the storyline is far from predictable and will surprise even the most seasoned crime reader. They’re cleverly written to reveal aspects of the case and suspects little by little as the investigation unfolds, yet always leaving little twists and turns to be discovered throughout.

Beyond this, each instalment develops the characters of Fawley and his squad a little more. We care about the characters, and the performances of Lee Ingleby and Emma Cunniffe only serve to aid this.

In this, the third instalment in the series, there is the same kind of disturbing case we’ve become accustomed to reading from Hunter. There’s also perhaps more focus on DI Fawley’s private life than there has been in its two predecessors, though this remains an undercurrent.

In summary: a third instalment that’s as gripping and well written as the first two, with further development into the main characters that leaves you craving the next!

The book fits in perfectly with the DI Fawley series. It’s a gripping story, written just as well as the previous books in the series. A sad tale what with the subject matter but dealt with very carefully and with some really good twists. I enjoyed the continued building of the police characters lives just as much as the crime story itself.
I couldn’t guess who-dunnit as it twisted and turned through the investigation until the very end.

A decent story very well read. I would definitely recommend this book, worth a precious credit!

My new favourite author! Twists and unexpected turns, punchy main story and lots of sub-plots, characters I’ve grown fond of throughout the last 3 books and want to know how things develop - I’m hooked!

WOW ! what a book

I thoroughly enjoyed the book. next one please
I tried very hard not to listen.....but I couldn't stop

Great police thriller. Male narrator was very good five star performance. The female narrator gave a stilted performance so much so it was had to be sure if the scene had finished.

This book is one of the best ones I have listened to all year. The twists and turns of the plot keep you riveted. An unusual story the narrator just perfect for the story.

I have just listened again to this audiobook and loved it as much if not more than the first time when it was first out in audiobook. Great story and narration. Now to the next one in the series.

First off, I have to admit that I haven’t finished it yet so my comments are on points of narration not storyline. 1. Magdalen (College) is pronounced “Maudlin” 2. Blackbird Leys - Leys is “lees” not “lays”.
3. The neighbours all seem to have ‘cockney-style’ accents - given this is set in leafy N Oxford where, we’ve been told, houses cost £5million+ this seems a little incongruous!
All minor points I know but jarring and if real places are used, correct pronunciation should really be checked

I found the story very gripping and very much enjoyed the twists and turns and blind alleys.

What put me off was the pronunciation of place names Magdalen College is pronounced maudlin, Blackbird Leys should be lees.

Probably only an irritant to people who live nearby.

Solid. Worth the read.

l use the audio books to relieve the boredom of long morning walks and "No Way Out" meets that need well enough. Certainly, it's well read. Full marks to the narrator. And the characters are good, complex and real. I love my crime/police dramas as I can put myself in the shoes of the detective. Try to piece it all together as the story unfolds. I only mark this down because it jumps around in time a bit. Out of the sequence a non visual person like me requires. Others may love it. Still there's enough plot twists and red herrings to keep the author on my list.

Love all the DI Fawley series

Excellent writer and really enjoy the narrator. Keep them coming Cara. Can’t wait to read the next one.

I enjoyed this one, though perhaps not as much as the first. The storyline was a little bit ragged and there were one or two plot holes in it. Otherwise, performance was excellent and the general execution of the novel was wonderful.

Wish Audible would bring in the second book in the series!