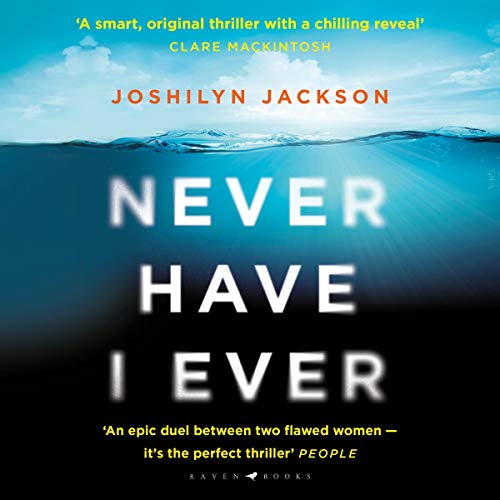 Never Have I Ever

Sunday Times Thriller of the Month.

It starts as a game at a book group one night.

Never Have I Ever... done something I shouldn't.

But Amy Whey has done something she shouldn't. And Roux, the glamorous newcomer to Amy's suburban neighbourhood, knows exactly what that is.

Roux promises she will go away - if Amy plays by her rules.

But Amy isn't prepared to lose everything. She's going to fight back, and in this escalating game of cat and mouse, there can be only one winner.

"Wonderful - suspense and surprises, real characters and a scary, ominous backbeat. This feels like the book Jackson was born to write." (Lee Child)

"Jackson writes the kind of book that will set even the most blameless on edge, leaving us to wonder who might know our imperfect histories. Once I started, I couldn’t put this one down." (Christina Dalcher, author of Vox)

What listeners say about Never Have I Ever

An amazing plotline with memorable characters. Loved it! Didn't want it to end. Highly recommended.

Excellent book,
loved every bit of it and it made me wanna take up a new hobby

Why say something once when you can say it ten times? why describe a feeling in one situation when you can go on and on and on about for half an hour ? why have an exciting plot line when you can have a novel in which literally nothing happens ? why have one totally unrealistic scene when you can have a dozen ?
the best thing about the book is the narrator. she is also the author. i suggest she sticks with voice acting and reading, and leaves story telling to people who well, have a story to tell.
honestly ? save your credit.

Didn’t see those twists coming... very clever. Just when I couldn’t see where it was going, it veered off in a direction I wasn’t expecting. Really liked this book

amazingly complex and engaging! Loved ever moment. Pulls you in deeper and deeper making you want to try scuba diving yourself.

Interesting to the last word. Full of unlikely plot twists that are belivable. Has suspense but not enough to be unbearable to readers like me who can't tolerate much.