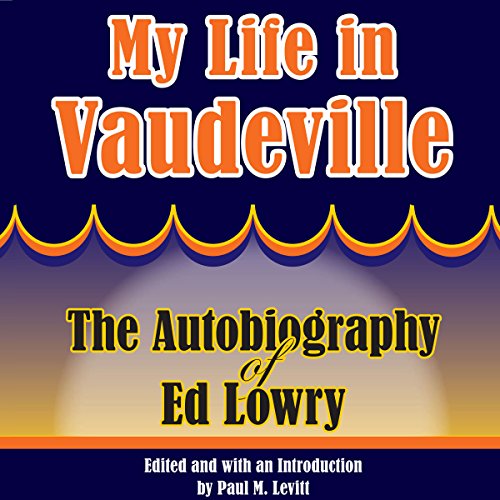 Ed Lowry joined the vaudeville circuit in 1910 at the age of 14. He never achieved stardom equal to the likes of Fred Allen, Jack Benny, George Burns, Buster Keaton, or Eddie Cantor, and he never considered himself an "artiste". Instead, he saw himself as a hoofer and comic simply trying to make a living on the vaude scene. My Life in Vaudeville recounts Lowry's long career in entertainment from the viewpoint of a foot soldier with a big dream.

Lowry's story begins in the heyday of vaudeville in the early twentieth century and follows its gradual decline. Unlike many of his associates, he recognized that movies and other forms of entertainment were the future, and thus branched out into other venues.

My Life in Vaudeville is an unpretentious record of a time when thousands of young people went into show business to escape the boredom of daily life, and Lowry's story is a view of vaudeville not often encountered. Lowry does much more than recall the daily life of a working actor, musician, and comedian. His story brings vaudeville to life and places it within the larger narratives of popular culture and popular entertainment of the twentieth century.

"Paul M. Levitt, a novelist and playwright of wit and verve, has rescued Ed Lowry's extraordinary memoirs. My Life in Vaudeville, covering the Jazz Age to the dawn of World War II, provides a rich resource for theater history and enhances a lost era with captivating details." (Alan Wald, H. Chandler Davis Collegiate Professor, University of Michigan)
"This is an autobiography that brings to life not only its remarkable author but also the entire era and adventures of American vaudeville." (Berel Lang, Department of Philosophy and College of Letters, Wesleyan University)

What listeners say about My Life in Vaudeville

Could Have Been Shorter

I loved the first half - three quarters of the book. The stories were funny and I learned quite a bit about vaudeville life. But I feel the last quarter of the book could have been summed up in an epilogue. Overall though highly recommended for theatre history enthusiasts.

This is an interesting book if you have a desire to know the ins and outs of real vaudeville life, as I do. However, you MUST adjust the speed here to 1.5 or even more. This reader is lugubrious. But it worked for me after I really sped up the process. You have been warned!