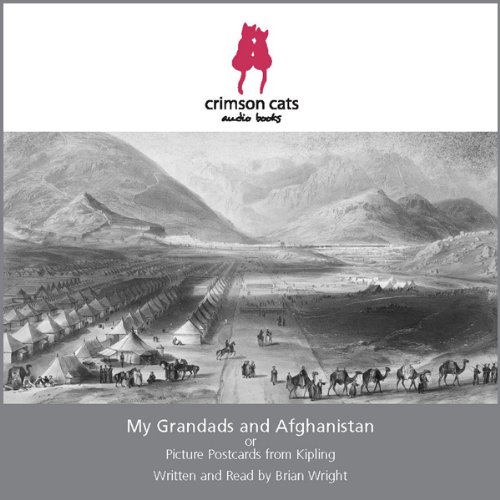 My Grandads and Afghanistan

In this audiobook Brian Wright uses family memories and extracts from Rudyard Kipling's prose and verse to bring us a unique and personal picture of Britain's previous involvement in Afghanistan. BACKGROUND: Afghanistan is frequently in the news today but it is not always remembered that the current conflict is Britain’s fourth Afghan War. The first was from 1839 to 1842, the second 1878 to 1882, the third in 1919, with continuous border clashes before, after and between. Basically, they all began because Afghans have always resisted foreign interference.

WRITER AND READER: When the writer and actor, Brian Wright, began to look into his family history he discovered that his family, like thousands of British, Indian and Pakistani families, supplied the British Army in India with volunteer privates and NCOs, starting with his great, great, great grandad in 1804. His son, Brian’s great, great grandad, served during the first Afghan War, his great grandad fought in the second, and a great uncle in the third. His grandad and his father spent the best years of their youth guarding the Afghan frontier.

RUDYARD KIPLING: Brian’s dad told him stories and left a few photos, but for the rest all that remains is bare army records. At this distance, it would be hard to imagine the lives the Grandad’s and their families led, were it not for unique echoes of them in Rudyard Kipling’s work, based on his experiences as a journalist just after the second Afghan War. After his death in 1936 Kipling gradually fell from grace but in recent years his remarkable skill as a wordsmith, his integrity and the inspiration he took from both his Indian and English heritage have restored him to his place as a major writer. In recent times, with new empires rising to replace the old, his military stories and poems have acquired new resonance.

MUSIC: The banjo is played by Kevin Adams and the trumpet by Andrew Baker.

"Brian Wright's authority on the subject is unique. He recreates this harsh world of 'war, bloody war' mainly from the experiences of his own family, and from Rudyard Kipling's poignant verse. He also makes pertinent parallels with today. 'It is easy to get into Afghanistan', said the Duke of Wellington 170 years ago, 'the problem is getting out again.' Will our leaders never learn?" (Rachel Redford, The Observer)

What listeners say about My Grandads and Afghanistan