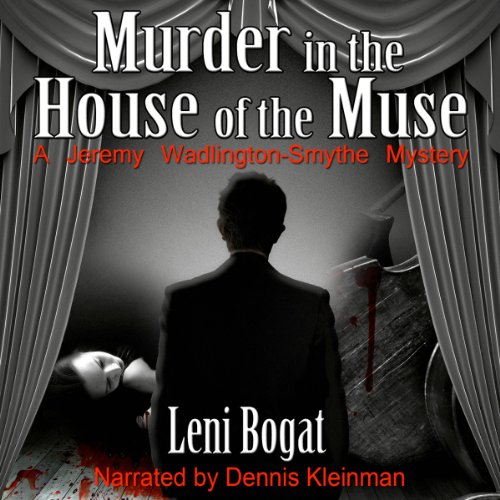 Murder in the House of the Muse

Murder in the House of the Muse

By: Leni Bogat
Narrated by: Dennis Kleinman
Free with a 30-day trial

In this delicious murder mystery we are introduced to Jeremy Wadlington-Smythe, a newcomer to the wonderful world of the whodunnit. In this novel, the first of the series, Jeremy, an accomplished orchestral conductor with a unique view of his mission, accepts an engagement to lead a major American symphony orchestra only to find himself in the midst of murder and mayhem.

Jeremy is recruited by the president of the board of a major American orchestra because of his unorthodox approach to the business of orchestral music making. He has managed simultaneously to make himself very successful as a conductor with a much larger than typical following as well as one who is mistrusted by the administrators of the orchestras he conducts because his approach is in direct contradiction to the, by now, century old paradigm in which they are floundering.

What listeners say about Murder in the House of the Muse

I'm sorry. This book just got on my nerves. Thought it would be very interesting; surely it had all the ingredients to have been. Though there had been no Audible reviews, the Amazon (paper book) reviews made it sound good. And it probably is in that format.

Almost from the start I felt the whole thing was very off-putting. It began okay--a wealthy backer considering how to bring talent to the city's orchestra and help audiences enjoy the music more and obviously pay more for their annual subscriptions. So they invite British conductor Jeremy Wadlington-Smythe to come to America to lead the orchestra. He is a conductor with the ability to bring music to an audience in very creative ways. He views it as a challenging opportunity to bring music to life in new ways. That's where the book starts going downhill. Even before the mystery part begins.

Although there is a lot of "insider" sort of exposure to the backstage workings of how the creative moment seen by the audience is actually much more down and dirty deals, which has interest, to me that was overpowered by what was either bad writing or bad narration (I'm not sure which). It was artificial, pompous, stilted, and I cringed at the conversations between people that used such perfect grammar it was simply unrealistic. Average people simply don't converse so formally.

Found it ironic that a book about creating music, beautiful sounds, wound up being one where the sounds of listening to it read aloud were just pretty awful. I gave it more stars than I personally felt it warranted because the people who had commented on the written book seemed to like it so much that I suspect it might be better in that version.

The other Mozart in the Jungle!

Would you consider the audio edition of Murder in the House of the Muse to be better than the print version?

What other book might you compare Murder in the House of the Muse to and why?

Mozart in the Jungle:Sex, Drugs and Classical Music,

I was able to visualize the character of Jeremy Wadlington-Smythe and got a better idea of his musical, creative and his Sherlock Holmes murder solving background.

Dennis Kleinman's development of the characters through his voice was amazing and it made it much easier to follow and get more involved in the story!

The story really kept me on my toes, and with the great descriptions of the individual characters passions for music I feel I have both a new knowledge and a new appreciation for symphonies.

Yes! I love murder mysteries and this was an easy listening, especially with the soothing and captivating voices.

This is one I will listen to again and again!

Would you consider the audio edition of Murder in the House of the Muse to be better than the print version?

Yes. The sociolect complemented the story and especially the main charater well.

The realism of the orchestral plight, especially with the management and the soloists. Except for the murders the story line could be almost any American classical group.

The main character, Jeremy Wadlington-Smythe. Again the sociolect was superb. His voice created for me the air of royalty and the sophistication of many classical musicians.

The roughness of the detective is a wonderful contrast to the refinement of the other cast.