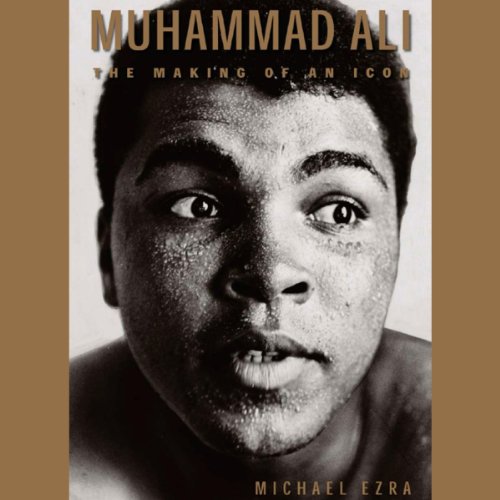 By: Michael Ezra
Narrated by: Chuck Patyk
Try for $0.00

Muhammad Ali (born Cassius Clay) has always engendered an emotional reaction from the public. From his appearance as an Olympic champion to his iconic status as a national hero, his carefully constructed image and controversial persona has always been intensely scrutinized. In Muhammad Ali, Michael Ezra considers the boxer who calls himself “The Greatest” from a new perspective. He writes about Ali’s pre-championship bouts, the management of his career and his current legacy, exploring the promotional aspects of Ali and how they were wrapped up in political, economic, and cultural “ownership.”

Ezra’s incisive study examines the relationships between Ali’s cultural appeal and its commercial manifestations. Citing examples of the boxer’s relationship to the Vietnam War and the Nation of Islam - which serve as barometers of his “public moral authority” - Muhammad Ali analyzes the difficulties of creating and maintaining these cultural images, as well as the impact these themes have on Ali’s meaning to the public.

"[A] sophisticated, well-researched, and exciting book with a coherent thesis and organization." ( The Journal of Southern History)
"Ezra's study is original and incisive, based on a wealth of primarily newspaper and secondary sources. It's a book that opens windows rather than shuts doors, a study that says much and reminds the reader that much remains to be said." ( American Studies)
"[T]his is a valuable book.... Ezra [provides] insights into how celebrity status arrives not just through good intentions and noble acts, but is shaped and conveyed by larger political, financial and economic structures." ( The Sixties)

What listeners say about Muhammad Ali

I know what happened to movie phone guy, he now reads audible books. This performance is the worst I've ever heard. Monotone.
The story jumps around. Seems like the author wrote this in a hurry and never went back to edit. It reads more like a high school paper than a researched book.