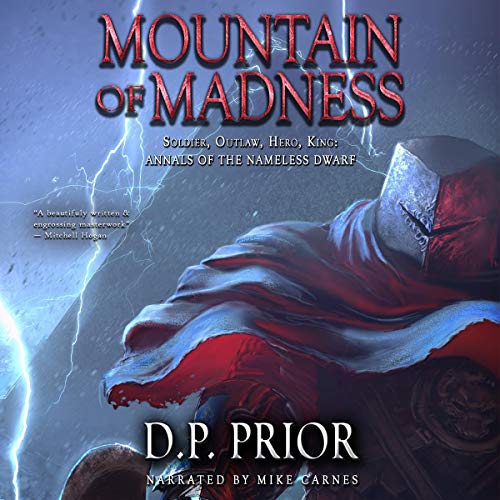 Awakened from an induced year-long slumber, the nameless dwarf is tortured by memories of slaughter and must come to terms with who he has become: an outcast, a butcher, the most reviled of dwarven-kind.

As forces of unimaginable destruction coalesce around the mountain fortress of a mad sorcerer, the philosopher Aristodeus puts together a team for a last, desperate attempt to avert the coming cataclysm: a knight besieged by doubts, who has been prepared since a child for the current crisis, yet is crumbling under the pressure of the task before him; an albino assassin who denies the truth of what he really is; a woman with a black sword as disturbing as the axe responsible for the massacre at Arx Gravis; and a dwarf with no name, who will either carve out the path of his own redemption or condemn the world to a night that will never end.

What listeners say about Mountain of Madness

This series is captivating! You will not be able to put it down and the end happens too quickly. This is an excellent series, so much mystery and intrigue. I was gifted this book in exchange for my thought and my thoughts are, I cannot wait till I can read the rest. Now for the book, poor Nameless, that helm trapped on this head makes me feel claustrophobic! I dont know how he does not go mad in that thing! But it has also helped him. The enchantments on it have benefited him but fed through a tube and just that eye slit to see, how horrible. I still dont trust the people around him one bit except maybe Zaylis, he seems to be just as much a victim as Nameless, although he may not remember his name, son of Drume but I do and I hope he does again soon too.

I grew up reading dragonlance, forgotten realms, etc. Prior has created a character, universe and Storyline that would have done any of them proud. Here we have the nameless dwarf, companions, threats, and strange happenings. You really get a feel for the character and the storyline sucks you right in. Can’t wait to read the rest of the annals. I was voluntarily provided this free review copy audiobook by the author, narrator or publisher

D.P. Prior has a refreshing style. While the plot line is a tad slow to develop his character building is great and it doesn't take long for the book to take off. Thank you, D.P. for an awesome read. Books 1&2 left me wanting more.

don't be a shoggard, get this series

new characters added to the fray, new battles, just keeps gettin better. Mike Carnes does a great job keeping the voices separate,(and there's a bunch) so you know who's speaking which truly helps the story flow. I can't wait for the next book, I really want to see where this all goes. Great writing D.P. Prior, this series is one of those that's easy to picture in your mind as you listen.

Again great great work... Mike narrators are spot on..... Can't wait for the next installment.....definitely makes me want to buy the physical set of books! Great work guys yet again !!!

A Decent Sequel to Ravine of Blood and Shadow

I liked this novel only slightly less than its prequel. It is closer to traditional fantasy, with a party of adventurers with varied talents and skills. For all that, it’s interesting and I think worth reading.

If you are bothered by language, you might want to steer clear. Some of the characters swear like sailors.

Whether it was the story, the narration or just my attention span, I struggled to connect with this story unfortunately and so kept losing track of what was happening.
There’s plenty of action and adventure to keep you amused, but I found the narration a little too ‘samey’ without any differentiation between action scenes and just daily ongoings, although he does have some great character voices.
This is my honest opinion on a free review copy.