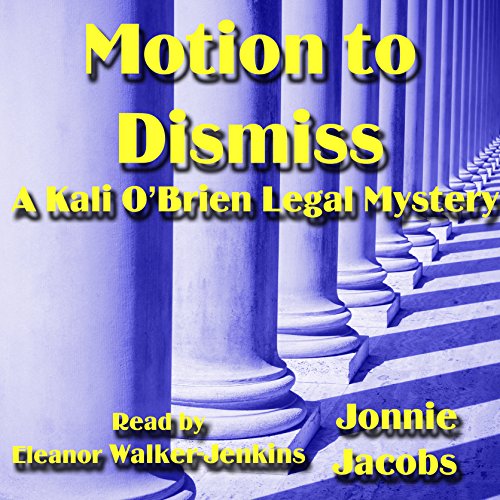 San Francisco attorney Kali O'Brien knows that in the legal system, reality can be shaded, but she doesn't like clients who lie to her. That's what she has in Grady Barrett, a wealthy computer magnate married to Kali's best friend, who is arraigned in the rape of Deirdre Nicholas. Grady maintains that Deirdre's vivid, emotional, and thoroughly convincing deposition is a clever and manipulative web of lies spun to trap him. Then Deirdre plunges to her death from a second-story balcony. A tragic accident? Or cold-blooded murder? Now, bound to a client she can't trust, Kali finds herself straddling a fine line.

The original version of this book was written in 1994 but it feels more 1974, or 54 or old in any case. I listened to the first couple of hours of this one with a low grade anger until I decided that I didn't have the determination to continue. The plot centers around a female lawyer whose best friend's husband is charged the rape, then the murder of a woman he had what he considered to be consensual sex. The lawyer Kali O'Brien is maneuvered into becoming the lead lawyer for the husband's defense despite her mixed emotions.
This audiobook had references to "date rape" as opposed to "real rape" and the men in the narrative being contemptuous of the woman reporting the rape and the concept in general. Kali was a disappointment in the sense that she basically took whatever the misogynistic creep she was defending as well as the other lawyer's condescension. All in all I found the theme and the writing irritating in the extreme. A few chapters into the book I wanted the defendant convicted on the basis of his being a total jerk. I also wanted to just once hear Kali tell both Mark and the defendant to tell their own lies. I liked the first 2 books in the series; didn't like this one.

It is in the upper two thirds.

It keep me guessing however it was not so suspenseful as to keep me at the edge of my seat.

Did Eleanor Walker-Jenkins do a good job differentiating all the characters? How?

The narration was mediocre. It was listenable however it could use an all around general improvement. I don't feel the narration was as bad as some of the reviewers felt that it was. However it was the major draw back for this book.

The narrator did a satisfactory job differentiating between the characters.

This was a fairly good legal thriller. I wasn't able to easily guess the killer although I sort of suspected who the actual killer may be and wasn't surprised with the Perry Mason style court room revelation. There were some red herrings in the story to offer distractions. The story was well written with a decent plot. Although the accused is innocent of murder and rape he is not an innocent person nor is he especially likable. Grady, the accused is a rich, spoiled arrogant narcissistic liar who cheats on his seriously ill wife. He is a good father and despite his character flaws he is a caring loving husband. Grady is a difficult person for Kali to defend, and she only does so because he is the husband of her best friend. Grady's character flaws and personality really contribute to making him look guilty.

First Grady is accused of date rape and when the victim is murdered he is then accused of her murder. The police do not even consider any other suspects. Gardy admits to consensual sex with the victim to Kali however he insists to his wife that he only gave the woman a ride home from a party. Of course his wife is no fool and knows better.

All in all this was a good legal thriller and worth a listen.

P.S. Grady deserved to go to jail just on the merit of being a real cad and a**hole.

Captain Cheaty and the Cheatersons!

Narration - Eleanor Walker-Jenkins - Pretty Good!
I just read another review that said the narration was monotone and I have to disagree and agree. I thought she had a wide range of character voices and when she was reading dialogue she brought the characters to life. Her storytelling/narration was a little more monotone-ish, but she has a pleasant voice and I found her overall very enjoyable to listen to.

The story was terrific! I had a hard time pulling the earbuds out of my ears to do any interacting with other humans during this listen. I thought very early on that I knew 'who done it', but I was completely in the wrong ball park until the reveal. Then we had a moment or two that was a little bit Scooby Doo, but other than that, I thought it was smartly written, fast-paced and a terrific legal mystery. This is also the first in the series that I have read/listened to and I wouldn't have known that if it hadn't said 'Book 3' in the title, so this holds up well as a stand-alone.

Now for characters? Mark? Really Kali? I don't know you well, but you can do better. The two main men in this story are quite a pair. Cheat on their women, Lie to their women? I was NOT their fan. And REALLY not impressed with Grady...no, I can't say that... He's close to a win, but I thought they were both despicable men. Let's hope Grady has learned his lesson, because he doesn't deserve the gift of forgiveness he received from Nina. Other than her choice in men, I really enjoyed Kali's character and the entire concept and will definitely continue with this series!

Having recently enjoyed "The Only Suspect" by Jonnie Jacobs, I was really looking forward to listening to this.
Not having read the first two books in this series, I was slightly worried whether I'd be lost, but the book worked well as a stand-alone.
It is a solid legal thriller / mystery. Defense attorney Kali O'Brien is defending her best friend's husband who is accused of rape. Torn between wanting to support her friend and niggling doubts about the husband's innocence, Kali becomes involved in an investigation that leads to several deaths.
The plot was interesting, fast-paced and well written. It's always a big plus when I can't work out who is behind a murder, and in this case, I couldn't. Great.

Now, the not so good. I wish I had been able to read the print version. The narration was monotonous. Totally void of emotion or inflection. As the same narrator has been used for the first two books in the series, which I would like to read, I will have to stick to the printed versions.

Do authors actually listen to the narrators?

I haven't read many court mysteries and was able to listen for review and I think, why is this narrator a narrator? Why is the author allowing this narrator to be a narrator? The story was very interesting to someone new to this type book, but I wouldn't listen to another anything with this narrator. Did I mention how the narrator ruined the story...?

Very average story with a twist at the end that is almost worth the time it took to listen. Performance is lacking. "I was provided this audiobook at no charge by the author, publisher and/or narrator in exchange for an unbiased review via AudiobookBlast dot com"

Mystery that leaves you guessing

The story was pretty good. I thought I had it figured out, but was wrong when the ending was explained.

I had a love/hate relationship with Grady. On one hand, I kept talking back to him when he was talking in the book. At the same time, I liked him.

Did Eleanor Walker-Jenkins do a good job differentiating all the characters? How?

She did, but her voice was a little annoying. Her men didn't really sound like men. This did not destroy the book for me.

Once I got into the book, yes, I wanted to just listen to the end of the story.

I received a copy of this audiobook in exchange for an unbiased review.

Right up there with David Baldacci!!!

What made the experience of listening to Motion to Dismiss the most enjoyable?

Enjoyed the twists and turns and suspense.

What was one of the most memorable moments of Motion to Dismiss?

Which character – as performed by Eleanor Walker-Jenkins – was your favorite?

Kali O'Brien stuck to her guns & tried the case the way she thought it was most advantageous.

Suspense at its best.

Can't wait for the next Jonnie Jacobs legal thriller.

This is a great read!

Very good story line. I thought I had figured out who done it early on I was wrong. The actual villain came as a shock to me. The narrator did a very good job, the author wrote a good story and now I have to go back and get the first two books in the series. That is the highest accolade that I can give a book, that I want to complete the series.

This was my first Jonnie Jacobs listen and I can't wait to get another book.

The character development was great and I couldn't stop listening. I thought the story continued to build at a steady pace and I was not disappointed at the end

The narration was lively and will keep you engaged. This book is definitely worth the credit.