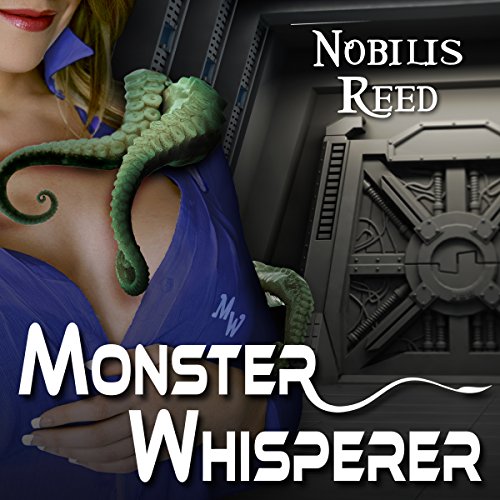 By: Nobilis Reed
Narrated by: Vivienne Ferrari
Try for $0.00

If there's something wrong with your tentacle monster, who are you going to call? Dale Clearwater: Monster Whisperer. With her own ship and a menagerie of tentacle monsters, she travels from world to world, rehabilitating monsters and training the people who love them. From the amorphous, fluid Kritzoan to the stonelike Nalcheka, Dale embraces the monsters and records her encounters for a reality show that broadcasts to countless worlds.

One might think there's nothing she couldn't or wouldn't do. Still, when she gets a call from her old colleague (and old flame), Dale nearly turns him down. Nearly. Joining him to capture a particularly dangerous monster is part of an adventure that has the potential to change their universe - or lose Dale her monsters, her ship, her show, and everything that she holds dear.

What listeners say about Monster Whisperer

I fell in love with the characters, loled at the ridiculous situations, and never wanted to stop listening. I honestly think it is the best adventure novel I've read this year.

This is, at its face, a rather absurd tale. However, the parts work together to make a very enjoyable light listen. If you come in wanting to chuckle a bit, while still wanting a story with a little suspense, it’s a fun listen.

Imagine a future (or parallel universe) where peope keep exotic, tentacled creatures as pets. Not the least for their own sexual pleasures.
Add a hero who's oitstanding in training these creatures, the hunt for a rare species and people going missing. Will she succeed in her missions, save amd change the universe as she knows it?

Do you like tentacle sex? Then this story is definetely for you. You just like a science fiction/ fantasy story with sex? This story might still be for you. Let yourself be surprised. I'm not much into tentacle sex myself, yet I thoroughly enjoyed myself. This is a story that actually got a good storyline with some twists and plots. While the sex is integral part of it, you can well imagine it without.
Well worth reading if you are not completely averse to the topic.

If you're a fan of erotica and scifi this may be the book for you.

With a good story as well as Incredibly hot & sexy. Only problem is, I wish there was more.

A must listen for fans of SciFI and erotica

First of all, I have to say I love the performance of Vivienne Ferrari. Not only does she have a very pleasant voice, there are enough of differentiation or intonation of the different characters that you can follow the story and hear who is doing what without any problem.

As a long time listener of Nobilis Reed’s podcast I have heard the Monster Whisperer before as he presented it on the podcast, but I have to say it’s a totally different thing to listen to it as an audiobook. You get more drawn into the story when you can listen to it in one go.

So, for the story. It’s very nice and there are both depth and development of the characters. The story draws one in and I hope for a continuation of the story to experience more in this universe.