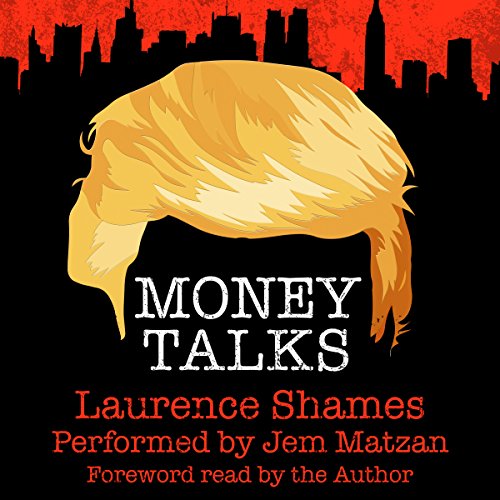 By: Mr. Laurence Shames
Narrated by: Jem Matzan
Try for $0.00

Now and then, a novel turns out to be prophetic - and no one is more surprised than the author.

When I wrote Money Talks back in 2007, neither I nor anyone else imagined that the White House would soon be occupied by a man who bears such a striking and in fact uncanny resemblance to my villain, Robert Maxx. I wasn't trying to write a predictive dystopia; all I wanted to do was to tell an engaging story that would let me think my way into the mind of a real-estate mogul with a bullying manner, a head of hair flamboyant enough to match his ego, and a somewhat childish fixation to see his name on very tall buildings. I wanted to explore what drove that kind of man, what kind of neediness was behind his endless quest for power.

And I wanted to see how an ordinary, decent fellow might keep his moral bearings while in the employ and thrall of such a person. My everyman was a mild-mannered ghostwriter named David Collins. His predicament, in 2017, is one that millions of us share: How to hang on to his hopes, his dignity, and maybe even his sense of humor, in a high-stakes game where the bad guys seem to be holding all the chips.

What listeners say about Money Talks

Totally unlike other Shames books, but excellent

I've been an ardent fan of Lawrence Shames ever since out of wild curiosity I picked up a copy of his "Virgin Heat" on a book trading table at my mother's nursing home. That book made me laugh so hard my stomach hurt. Since then I've read over a dozen more of his books and loved them all. They all featured roughly the same locale and cast of characters. But "Money Talks" is so different that you would never know it's the same author. Nevertheless, it is as wonderful as his other books, and eerily prescient; much more thought provoking than funny. If you aren't 'in the know' concerning this book, I guarantee that your jaw will drop. Highly recommended.

spoiled only by the main character

so accurately sketched that I needed to take breaks to shower. 15 words? really? Then this is my last review for audible.

Made me shiver. The rise of greed and the fall of a nation.. read between the lines. I trembled listening to the story as main antagonist sounded like you know who.

Excellent production of a fascinating story. Robert Max character sounds eerily like someone we are all too familiar with.