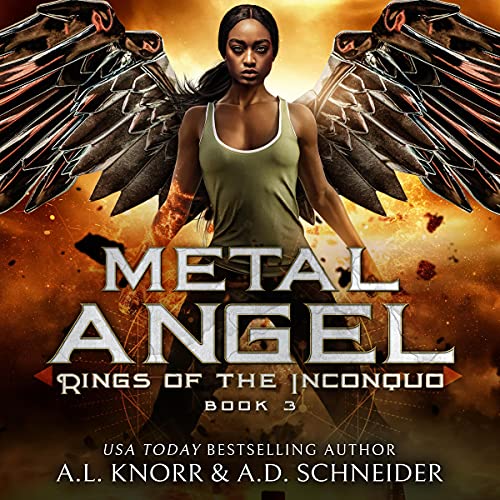 Every family has history, but hers might be the end of the world as we know it...

Ibukin “Ibby” Bashir is Inconquo, an inheritor of ancient power and with it an unending duty to stand against the darkness. She can bend and shape metal to her will, but she is still only human; she feels and bleeds. A fragile guardian, still she stands.

Uncovered after thousands of years, the dark foundations that make her who and what she is begin to rise again. The progenitor, the very first of her bloodline, stirs fitfully - Ninurta, founder of Kalhu, hunter before the gods, warrior without match. If he has his way, he will reshape the world with iron, fire, and blood.

Her mentor stolen away and her friends falling around her, Ibby knows too well what she faces. Merciless conspiracies, ancient horrors, treacheries old and new, all are arraigned against a young woman who only wants to see her broken family safe. But with grit, pluck, and a will of iron, she is going to save the world, or die trying.

It’s not the path she might have chosen, but what can she do? It is the family business.

Metal Angel is the third and final book in the heart-stopping Rings of the Inconquo series, a spin off from the best-selling Elemental Origins series brought to you by a collaboration with an epic creator "reminiscent of Tolkien".

Preorder Metal Angel and live the forging of a modern legend.

What listeners say about Metal Angel

As usual I really enjoyed listening to Abby’s book. I have already read them but listening just pulls you in. This is the last book in Ibby’s journey. The book is well written and has a lot of action as well as paranormal in it. In by learns just what she is capable of. Tara did a superb job at narration and I loved the British accent.

Beautiful end to the trilogy!

I really enjoyed this end to the trilogy! Ibby is one of my favorites, and it was really interesting to see where her power came from and have her come into her own. Also, Marcus! I also like the clear lead-in to more in the world, so it's nice knowing she's not done and may show up somewhere else. Really enjoyed this!

I received a copy from the publisher but these are my honest opinions.

so this brings Ibby's personal story to a conclusion but it is far from seeing her in any other books. This book was an action packed ride that was done just right.

Great ending to the trilogy

Well, this was… something different. I have read everything A.L. Knorr has published and I love the universes she created, the direction she takes her characters and, most especially, her writing. Because of this, I can easily tell when a book is a collaboration. And in the case of this series (Rings of the Inconquo), I can easily see where Mr. Schneider’s talents come into view. While the beginning of the series (book 1 – Born of Metal) is more Ms. Knorr, the middle book (Metal Guardian) is split even and this last book (Metal Angel) is more Mr. Schneider.

I think I was a tiny tiiiiiny bit disappointed by this – I considered giving it a 4 star review instead of a full 5 stars. But this is simply because of my preference. Mr. Schneider has his own style – more action-oriented, his style fits with the military-like scenes that the main character, Ibby, has to face. Unlike Ms. Knorr’s other series in this universe, Ibby’s story is definitely more filled with action, battles and literally defeating evil and stopping an apocalypse. What I missed, between all the action scenes, is a bit more focus on descriptions and feelings. There were a couple relationship-centric moments where I went “wait, that’s it? Those are all the comments and feelings!?”. And there were moments when I wondered how something/someone/some place looked like, in more detail. But I honestly believe this was my own preference, because I haven’t had the mood for a military-style, action-filled book in years (mostly since I’ve become a mother, apparently having a child drastically changes your preferences).

But overall, the book was worth it. I loved finding out what Ibby’s life was like before the main Elemental Origins series, and this trilogy takes us up right to that moment. It definitely helped set the background and get to know more about the Elemental Universe.

As for the performance, Ms. Kaye was ok. She adapted the voices to the characters, she put the right tone depending on the punctuation... It is just that... her tone and rhythm are sometimes just very repetitive. Constant, in an annoying sort of way. It grew on me, since in the end I have listened to the whole trilogy. But the other narrators Ms. Knorr has chosen for her other series were a lot more suited to my taste.

ANOTHER GOOD STORY THAT FINISHES THE TRILOGY AND TIES THE STORIES I TO THE ELEMENTAL SERIES.
VERY WELL WRITTEN AND VERY EASY TO FOLLOW, I COULDN'T STOP LISTENING AND BURNED STRAIGHT THROUGH IT. LOTS OF HUMOR, LAUGHS AND SUSPENSE
NARRATOR IS GOOD AND EASY TO FOLLOW.

Ibby is an amazing character and her story has been exciting to follow. I am so happy with her trilogy ending and the epilogue was a perfect tie-in. Anything Knorr writes and has performed in audio is an enjoyable listen.

Dark matter, dark materials, and the glow at the e

Ibby continues her efforts to save humanity and her family. The tale will rock you, from hope to despair and back again, and always riveting you. Mesmerism is A.L. Knorr's talent, and together with Aaron D. Schneider, you'll be listening to the story in one go! I just love British accent, and Tara-Louise Kaye is a talented narrator - and it was fun listening to her telling this story!

This book continues on after the climactic ending of book 2 and the pace is fast throughout this book as Ibby and friends try to stop Nimurta from gaining full strength and killing millions, if not billions of people throughout the world.

Things get personal for Ibby when her Uncle is taken, but she feels she is not strong enough to defeat the enemy.

Daria returns in this book – but is she friend or foe? Can Ibby believe her story and forgive her for what she did to Jackie and her Uncle?

The book hits the ground running and does not stop until the end.