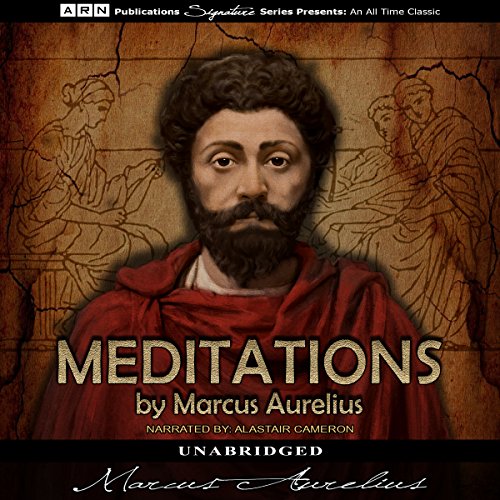 By: Marcus Aurelius
Narrated by: Alastair Cameron
Try for $0.00

Though the Romans were known for having contributed much to culture and the arts, there was one facet that was unrivaled when it came to ancient civilizations: their published works. Philosophy was their forte, and it goes without saying that the meditations by Marcus Aurelius is a superb piece of philosophical writings and musings. What is interesting about this collection is that it chronicles his thoughts during the time of his reign as Roman Emperor from AD 161 to 180. He did this so he could provide himself with a bit of self-reflection and meditation, and when he looked back at his writings, he could use them as a means of bettering himself not only as a leader but as a person.

The meditations are grouped into 12 books in total, and each of the books pertains to a specific time in this life. What is notable about the central message of the work is that he encouraged himself, as well as the people around him to shed their judgments of people. Indeed, it was his mission to stop himself from self-judgment, as well as developing negative perceptions of other people. He wrote about his desire to become a better man, and though he perhaps did not wish for these meditations to be published, they have since inspired many to follow his philosophy.

What listeners say about Meditations

Information could be useful but it’s to hard to get into since it sounds like a robot while he is reading it. I’ve tried to listen to it a couple of times know and just gave up save you money and try a different narrator.

A fire hose of wisdom

Lots of nuggets of wisdom that need time to sink in. Listen with a journal in hand.

This translation uses a lot of archaic speech such as "thee", "thou" and "goest" making it very inaccessible to the modern reader. The speaker does as much as he can with it given the limitations but it is tough to follow.