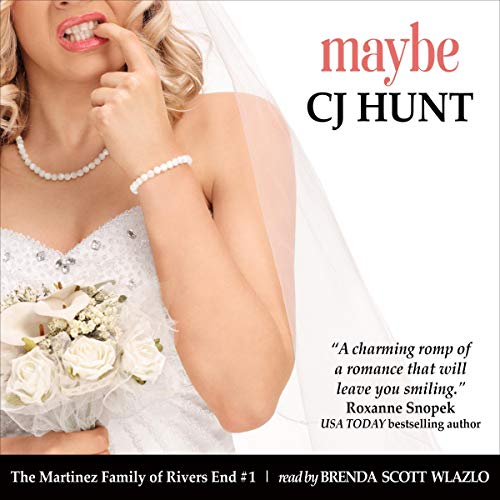 By: CJ Hunt
Narrated by: Brenda Scott Wlazlo
Try for $0.00

“A charming romp of a romance that will leave you smiling.” (Roxanne Snopek, USA Today best-selling author of Sunset Bay Sanctuary)

Social worker Lucie Kellerman is five days away from the wedding of her dreams. Well, the wedding of her mother’s dreams. Lucie’s just happy she’s finally doing something her parents approve of, and she’s thrilled that her relationship with her mother has never been better. There’s only one problem. Ever since she met bartender Daniel Martinez, she’s started questioning whether or not the life - and the man - she’s about to commit to are the ones she really wants.

Daniel Martinez has spent the two decades since his father died doing the right thing and looking out for his siblings. With such a big, involved family, alone time is a thing of myth, and he’s used to putting himself last. But that’s all about to change. For the first time in his life, he’s about to embark on an adventure all by himself. Eight weeks in Mexico - volunteering with a children’s literacy organization. At least that was the plan, until fate gives him a birthday gift in the form of Lucie Kellerman.

Now, he has a choice to make. Will he give in to temptation and tell Lucie how he really feels or stay silent and watch the woman of his dreams walk down the aisle and into the arms of a man he knows in his heart isn’t right for her?

Three hearts, two birthdays, and one wedding day that no one in Rivers End will ever forget.

While all the Rivers End stories can be listened to as stand-alones, you may want to listen to each mini-series in order to preserve any plot surprises and get the full picture of how the characters' lives weave together!

What listeners say about Maybe

For a quick romance, it’s better than most

For the genre, the brevity is a plus as it cuts out the fluff... no needless filler while it’s also not spare. Well executed & a perfect narrator for conveying this story style. If you’re looking for a romance that still has a meaningful “moral” on the way to its happy ending, this one delivers it with some panache without being obtuse or preachy: this is it. Fun-loving story that turns a little tragedy into comedy. If you’re leaning towards getting it, do it; you’ll smile & maybe even laugh out loud. I did once or twice. Wish the author was my neighbor, what a great friend I think she’d be.

Lucie Kellerman is ready to start the next stage of her life. She’s given up the job she loves as a social worker, but on the plus side, she’s marrying a man she cares for. A man she believes will make her happy. A man her mother approves of. But counting on someone else for happiness is always a fraught notion, and Lucie’s about to discover life is never simple.

Daniel Martinez is out celebrating his birthday when he sets eyes on a beautiful woman. Love at first sight? Hard to say, but he’s captured by Lucie. After a spending just a short bit of time with her, he knows he wants more. But he’s respectful that she’s marrying someone else. Daniel has always been the responsible one in his family – taking over when their father died – sheparding his four brothers and one sister into adulthood. He has planned a trip to Mexico to teach English – the first real opportunity to be alone. I don’t have a large family, thankfully, although Daniel’s love for his siblings is strong.

As the wedding approaches, Lucie feels more and more isolated. This is the wedding of her mother’s dreams and Lucie would be happy to do something simple, not some grand affair with two hundred guests. Again, something I could understand. I think I’d lose it if I had to be the center of attention for that many people.

Lucie and Daniel cross paths numerous times and it’s clear there’s something between them. The question is, of course, whether they’re going to act on that attraction. Lucie goes so far as saying to him, “I know I can trust you.” Powerful, to be sure. Don’t we all just want someone who makes us happy?

Brenda Scott Wlazlo narrated this story and I thought she did a good job. There were quite a few characters and she handled it well. She brought the story to life. This is also the first Martinez story and given how many siblings there are, I’m expecting more novellas to come.

I did not like when the narrator changed your voice to sound like Daniel it took away from the story.