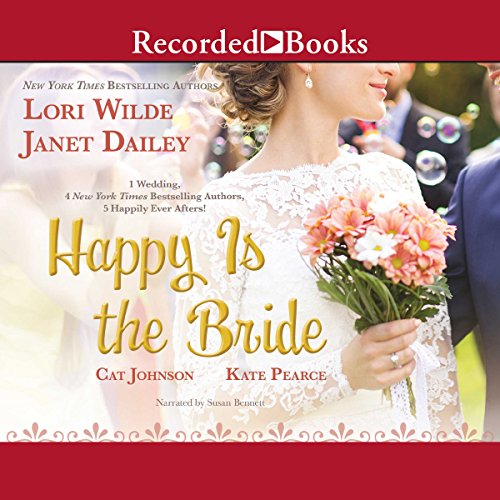 Happy Is the Bride

Stirring up all the romance and excitement a bride could hope for - plus a healthy dose of unforeseen shenanigans - four of today's most dazzling best-selling authors deliver the wedding of the year, where there's something - and someone - for everyone.

Opposites attract when a wealthy cattleman and a penniless artist decide to get hitched at a Texas dude ranch in tornado country - and the whirlwind festivities are as filled with surprises as their love. Especially when the guest list includes one pretty party crasher on a mission, a sheriff known as the One-Night Stand King, and a workaholic event planner who definitely did not plan to fall for a laid-back cowboy. Toss in a shocking behind-the-scenes bet, a fateful power outage, and a man of honor and a best woman determined to see the worst in each other (between hot kisses), plus thrilling lessons in love at first - and second - sight, and the celebrations are going to go all night long!

What listeners say about Happy Is the Bride

These were a nice group of stories, although a little slow at times. The final one was my favorite where it tied up the original story.

Hooked from the start!

I absolutely loved this story! 4 stories centered around a wedding story. The wedding day and then the anniversary of 1 of the other couples were on the same date as my husband's and my anniversary which absolutely tickled me! Narration was awesome and my commute was lightened considerably! Sweet love stories with a touch of steamy hot sex was just the right ticket! Very well done and I highly recommend!