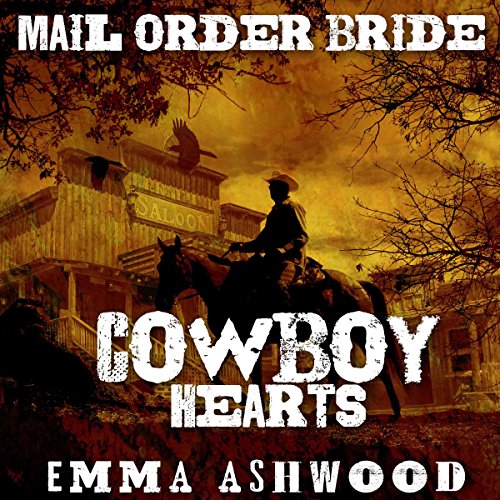 By: Emma Ashwood
Narrated by: Christina M. Willigan
Try for $0.00

Emma always dreamed of marrying a cowboy. Now she was doing it for real; she was heading west to be a mail order bride.

Disaster after disaster seems to strike in quick succession, so much so that all thoughts of a wedding are pushed to the back of Emma's mind. Emma finds herself drawn closer and closer to David, but will they have the strength and the resources to get their lives on track and find everlasting happiness?

Heading West to the Heroic Cowboy

Mary Rider's mother is dying. On her deathbed she confesses to her only daughter that her father isn't dead. He headed west to seek his fortune. Mary decides that there is little left for her in the city and that she should marry out West, not only to find love but to find what became of her father. However, being a mail order bride wasn't really the way she dreamed that she would find true love.

Benjamin is a successful rancher who needs a bride. From her letters, Mary seemed like the perfect catch. However, since she arrived the ranch has lurched from one disaster to the next. Can Benjamin sort out the problems with the criminals who are threatening his livelihood? Can Mary find any evidence of her missing father? And can love bloom in the arid desert?

Penny Smith is penniless and alone in the world. Her parents died some years before and left her with nothing. Her job gives her enough to pay the rent. But most of the time she wishes it didn't, because Penny rents a room from a horrible landlord who wants a lot more than just her rent money. She knows she has to escape, and after laughing about the idea of mail order brides, she decides that she will become one. She is going to marry a handsome, loving cowboy.

Harry is the cowboy who Penny writes to. He is a rancher who is always up against one problem or another. On the day of Penny's arrival, his cattle start being hit by a strange illness - an illness that doesn't threaten just the cattle but the whole ranch and his new marriage to his mail order bride.

I was really let down by this box set

I love when I find a box that on Audible. You get more than one book for just one credit and so I was so excited when I saw Emma Ashwood Mail order bride call boy hearts box set. It wasn’t until I got the story to that I thought wow this is very similar to story one and then when I got to book 3 again I couldn’t believe how similar it was the books one and two. All the mail order brides show up to meet their intended and when they do things start happening on the ranch such as rustlers buyers and they’re all put in a position where they need money it’s a prize surprise two of the stories had the same resolution. I know mail order bride stories Oh the same rinse lather repeat but this box that really takes the cake when all the plot of the same the only thing different work their names and a few other circumstances. I was really let down by this box set.