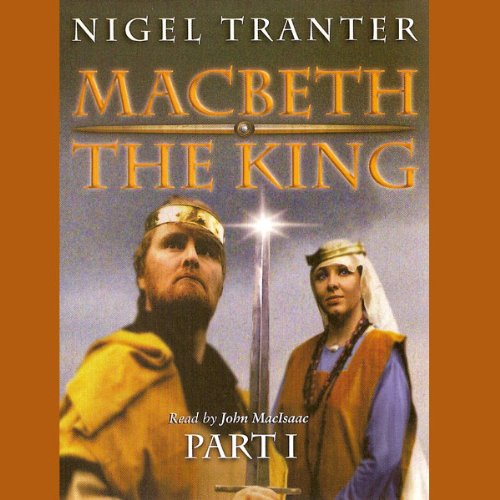 By: Nigel Tranter
Narrated by: John MacIsaac
Try for $0.00

Nigel Tranter introduces his tremendous novel of the true Macbeth and his struggle to make and save a united Scotland, of his devotion to the greatly-wronged young woman, Gruoch, of the humane laws they sought to establish, the battle he was forced to fight against Malcolm Canmore, the ancient Celtic Church he supported against the threat of Rome, and the price he paid.
©1978 Nigel Tranter (P)1998 Novelsound
Great Britain
Show more Show less

What listeners say about Macbeth

Macbeth The King? book of a great king Macbeth

?Macbeth The King? This is very famous book of a great king Macbeth Who is very famous for his bravery and he shows him as greatest kingdom emperor or His fair medieval ruler who defended his kingdom time and time again before eventually being overcome by his many enemies. This is completely different from the play by Shakespeare. Macbeth is one of Shakespeare's most famous plays, and is also called The Scottish play. Comprised of five acts, it starts by predicting tragedy, as three witches agree to meet up again after a battle is fought (setting the context for the play). Rich in imagery and with the idea prevalent that the state of nature affects the state of the world, there is thunder, lightning, doom and gloom.
Although fictional, is close to the existing legends and stories of the historical Macbeth. Macbeth The King which is an extremely sensory experience. This review is of the audio version, Narrated by John MacIsaac. The author's inflection adds drama to the plot, and additional sound effects help set the tone for the story. For example and the accompanying audio includes such ambient sounds as the crackling of branches underfoot and the fast breath of a frantic youth. Throughout his reading of the story, John MacIsaac alters his voice so that readers will come to recognize the different speech patterns and accents of its characters. Audio book is having three parts and available in three volume. The length of story of this audio book is two hours and forty five minutes. Macbeth was simply a character from a famous play then this is the book for you. One of my favourite Nigel Tranter novels