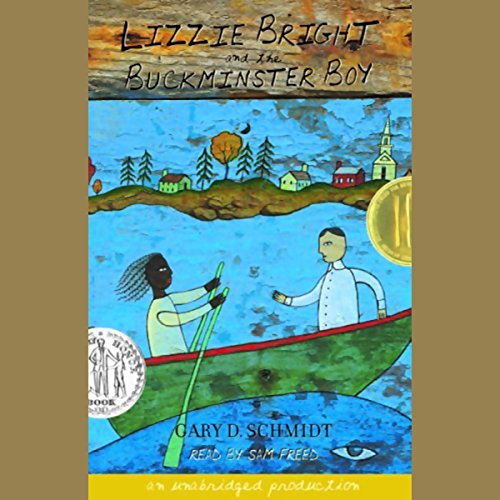 Lizzie Bright and the Buckminster Boy

Turner Buckminster can't find anything good to say about his first six hours in Phippsburg, Maine, where even baseball is a different game. He's about ready to light out for the Territories, where every shirt he wears won't have to be starched white and no one will know him as the new minister's son. But after meeting Lizzie Bright Griffin, a smart and sassy girl who lives on nearby Malaga Island, a poor community founded by former slaves, he doesn't feel quite so miserable. Lizzie shows Turner how to hit a Maine baseball, dig for clams along the shore, and row a boat next to a whale, opening up a whole new world to him, one filled with the mystery and wonder of Maine's rocky coast.

But the two soon discover that the town elders, along with Turner's father, want to force the people of Lizzie's island to leave so that a lucrative tourist trade can be started there. Although Turner is forbidden to step foot on the island, he and Lizzie try to save its people, and get caught up in a spiral of disasters that alter their lives forever.

Gary D. Schmidt has crafted a unique coming-of-age novel based on the true event of an island's destruction in 1912. This novel is a 2005 Newbery Medal Honor Book.

"The removal of the Malaga community really happened, and Schmidt weaves that history into a powerful tale of friendship and coming-of-age, adding a lyrical sense of the coastal landscape. Characters are drawn without reverence in this haunting combination of fact and fiction that has a powerful and tragic climax." (Booklist)
"Although the story is hauntingly sad, there is much humor, too. Schmidt's writing is infused with feeling and rich in imagery. With fully developed, memorable characters and a fascinating, little-known piece of history, this novel will leave a powerful impression on readers." (School Library Journal)

What listeners say about Lizzie Bright and the Buckminster Boy

I read this story to my then 8 year old grandson. It is a very touching and sad story but also shows that people can change and do the right thing. It may have been a bit sad for an 8 year old so would probably recommend it for older listeners/readers. It got the point across without being preachy or overly politically correct. Very well done.

This book was recommended to me by my school librarian. She told me that I would laugh, be angry, cry and I did it all. I really love this author and I will be reading more books by him!

I had to check whether this book had more than one narrator because the various voices of males and females characters of all ages are so distinct. It seemed there must be a cast of narrators! Excellently done! It made listening to this book a real pleasure. The story is also compelling. The only reason I gave it 4 stars instead of 5 is that Schmidt made the story so bleak with so many deaths.

An engaging story that reveals a fascinating slice of Maine history. I live in Maine near the town in which this story takes place, and the author captures life on the Maine coast beautifully.

Ok this book was mandatory for my school and I couldn't read it, it was so incredibly boring I had to buy the audio book. I hated this book

Slow beginning and middle. Picks up a little in the last 1/4, but not enough to make up for the other 3/4. The book tries to teach a message, but it takes so long in getting there that its a little bit anti-climatic once it does come.