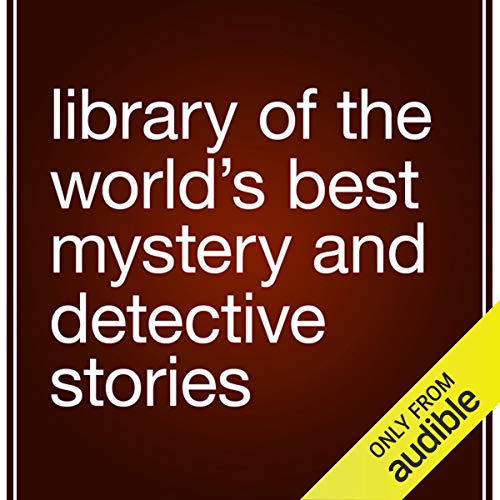 Library of the World's Best Mystery and Detective Stories

By: Julian Hawthorne - editor
Narrated by: Scott Woodside
Try for $0.00

In the six volumes of the Library of the World’s Best Mystery and Detective Stories, Julian Hawthorne presents us thrilling and mysterious short stories from all corners of the world. Some of the stories appeared in this 1907 collection for the first time translated into English, and many of them come from unexpected sources, such as the letters of Pliny the Younger, or a Tibetan manuscript. In the first volume, we find stories written by American authors.

Reader should have learned French.

The first few stories were written by French authors. Unfortunately the reader had not learned French and he mispronounced such simple words as "monsieur" which he pronounced as "moan-sewer." As a lifelong mystery reader, some of these stories were predictable. So, I look for how the story is told. They were so-so overall.

Who would you have cast as narrator instead of Scott Woodside?

Anyone who knew how to speak French.

Was Library of the World's Best Mystery and Detective Stories worth the listening time?

I have well over 100 audio books which means that when I say this is the worst narrator I've ever heard, I say it with some experience behind me. Mispronounced words, inappropriate pauses between words in a phrase, and pronouncing "a" with a long-a sound to mention just a few. I'm not even sure if the stories were any good - the narration was too distracting.

OK so the content was OK.. historical tales, many of which were not just detective tales but OK from a historical standpoint... and that part was good... but I had to wade through the gut wrenching mispronunciations of the storytellers narrator. Really Mon Sewer, and Zoo Roaster .. it just make the entire effort seem flawed...
If you are getting paid to read this stuff in English... then we expect you to read it in adult English not pedantic English.... really a bummer

This is a collection of very simplistic and not very good tales of supposedly mysterious stories. They are not mysterious, unless the mystery is how in the world they were ever chosen to be published. Also, the narrator is a terrible reader. His voice is lovely but it is a shame he does not know how to read properly. He pauses in between words when no such pause is called for and interrupts the flow of the narration. He mistakes magnetism for hypnotism when the text is clearly referring to the latter. If it were copied wrong in the text it should have been caught long before being said out loud. Another unbearable annoyance is that the stories are French in origin, so names of people and places are French, which the narrator can neither pronounce nor accent properly. All in all a great disappointment!! Do not even bother to download it. If I were allowed, I would not even give it a half star, but I must give it something. So.......

None of the stories I listened to were mysteries or detective stories. I only listened to a few and then gave up so there may have been some hidden gems that I missed.

Not So Interesting Mystery Stories

The stories never captured my interest. I look for the unexpected and stories that keep me reading. When the stories are good I have a hard time putting the book down.

This book is terrible! The stories vapid, but the narration is the worst! It sounds like someone who is just learning how to read! Very annoying.

Can you ignore mispronunciations ?

Would you try another book from Julian Hawthorne (editor) and/or Scott Woodside?

I don't know how the process of recording a book is done but if there is supposed to be an audio editor they did a very poor job. Scott Woodside has a pleasant, easily-understood voice but the glaring mispronunciations are disconcerting. Because I like short stories I was able to forgive the errors. Shouldn't someone be noticing these errors or previewing possible difficulties before the recording is made ? Not every narrator might be familiar, for example, with a "brazier" and would (understandably) pronounce it "brassiere", and "sow" ( rhyming with "now") is a perfectly reasonable mispronunciation of "sou."

As I mentioned, someone needs to preview and go over possible pronunciation problems before the recording session. I do not fault the narrator for this omission.

Poor storylines and worse narration. I suffered through three of the stories just to give it a fair chance, but cannot see wasting any more time with this.

Forget the terrible prononciation of the foreign text, Scott can’t even read basic English words. Poor quality and very distracting performance and overall not worth the time.

Would you try another book written by Julian Hawthorne (editor) or narrated by Scott Woodside?

No. This narrators accent is appaling and I am returning the book as I simply cannot bear to hear any more of his mangling the french language.I do not expect all narrators to have perfect accents when reading translations of foreign authors but his mispronunciation is dreadful.

Has Library of the World's Best Mystery and Detective Stories put you off other books in this genre?

Yes. Whoever thought these stories were the worlds best needs to get out more. There is nothing quality about the first story by Guy de Maupassent. I cant imaging a time when it was classed as a detective story.

The narrator could learn to pronounce some of the foreign words a bit better.

As I gave up part way throught the second story I cannot say. At least with the kindle version I could skip the most boring easily. I have to say I gave up reading that as well but thought it might be easier to listen to them than to read. I was wrong.

I think I have made my feelings about the editor and the narrator clear. The books were a product of their time and the first two should have been left there. I am astonished that even given the standards 10 years ago the one about the negro with criminal tendancies was shocking. The only excuse was that when written they reflected the way most people felt. Whatever your feelings about other colours to have a sentance that says on one look the man was a criminal as he was black was appaling even at the time.

The stories are engaging and interesting, however, the enjoyment is spoiled by the narrator: Scott Woodside's extraordinary mispronunciations.