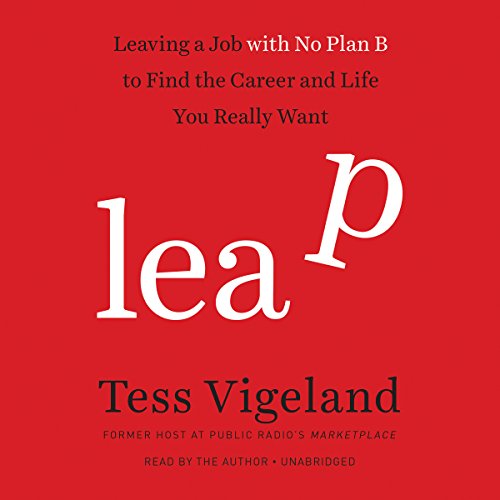 Until recently Tess Vigeland was a longtime host of public radio's Marketplace. It was a rewarding, high-status job, and Tess was very good at it - but she'd begun to feel restless. Without any definite, clear sense of what she wanted to do next (but an absolute certainty that what she'd been doing was no longer truly satisfying), she walked away from her dream job and into a vast unknown. Suddenly she was no longer "Marketplace's Tess Vigeland"; she was just Tess Vigeland.

For the multitude of Americans who change jobs midcareer (by choice or circumstance), the growing legions of freelance workers, and the entrepreneurially minded who see self-employment as an increasingly more appealing and viable option, Tess Vigeland has created a personal and well-researched account of leaping without a net. With her signature humor, she writes honestly about the fear, uncertainty, and risk involved in leaving the traditional workforce - but also the excitement, resources, and possibilities that are on the other side.

Leap is also about finding a new definition of success. Tess poses the important question, "Who am I without my job?" She shares the accounts of people who struggled with this question before and after they took their own leaps of faith, and they ended up finding out more about themselves than they'd thought possible. Success doesn't have to be measured by salary or a traditional career path, as so many of us are conditioned to think, but by your own happiness and fulfillment.

Part memoir and part field guide, this book offers a funny, thoughtful, and provocative look at how to find satisfaction and success when pursuing a career less ordinary.

What listeners say about Leap

Everything Mrs Vigeland says is true, but ...

All the stages of emotions, everything about our identity, and the fact that we loose and find ourselves by leaping Mrs Vigeland says is so very true. She describes a leap very well.. And she is Tess Vigeland, so obviously the performance is good and her points are extremely interesting.

But she is so repetitive, maybe she would have needed to go further into her leap journey before finishing the book ? Its a long jump indeed
...

Just What I Needed

I bought this book because it was on sale and because I am about to do what this book discusses: change careers without an action plan. I have felt so prompted to leave a good-paying job with good benefits, a job I have worked for nearly 6 1/2 years, to pursue something less stable but which I am passionate about and succeeded at in the past.

I was hoping Tess Vigeland's book might serve as a blueprint. It doesn't quite do that, but what it does do is give me an idea of the challenges that are likely in store as well as affirm the idea that it will still be worth it.

I enjoyed the book very much as and Vigeland is a great reader. What I enjoyed most was that the book is entirely relatable to what I am doing, but doesn't make me feel alone or crazy for venturing into the unknown. It made me feel better about my decision, which is just what I needed.

This book perfectly describes that ‘I know it’s time to go but I don’t know where or what’ feeling. I now realize that I made a leap, but just didn’t know what to call it. Wished I read it sooner because it stayed in my library for months.
I’d recommend this book for anyone who is contemplating a change/leap or for those who have already made a change in and to their professional careers and paths.
It’s nice to hear other stories and outcomes to what can seem ‘scary’ and ‘brave’ all in one.
I’m glad I got the chance to Leap!
Thank you Tess for sharing your story and the stories in your book.

LEAP- A story of discovery

LEAP- In this world of uncertainty, Ms. Vigeland shares the story of her journey from climbing the ladder of her chosen vocation to stepping back to evaluate the 'Who?' and 'Why?' of her own story. She also shares the stories of others who have 'Taken their own LEAP'. I appreciated her conversational writing style. As I listened to this audiobook I felt a certain connectedness to the author and her experiences. A good friend inviting you to share in their journey.

Ms. Vigeland is a good writer and an excellent narrator, which is no surprise given her occupation. The fault is in her premise, her promise in the title. There is little time given to actually leaving a job with no plan B. In fact, most of the book insists that no one leaves a job without proper financial planning and family support. Which is good advice, yes, but that is not what the title implies. Nor did Ms. Vigeland leave her job with no plan B. She simply got fed up with her full-time career and went part-time doing the same work, supported financially by her husband, and enjoying so much leisure time until the next temporary radio gig came along. The few epiphanies she has are what we in fly-over country would simply call common knowledge.

Forever to get to the usable info

If you're looking to find out all about being in public radio, this book is for you. TMI in fact about the subject. If you are looking for guidance regarding quitting your job and finding something new, there is very little substance here to help, unfortunately. Many stories, but no plans or assistance. I kept thinking maybe in the next chapter she'll stop talking about how she left her dream job and never stopped pining for it, but no, she never got there.

The author is very transparent, hilarious and melancholic..I loved it, Thank you Tess for taking the time chronicling your journey. Namaste.

You might automatically love this book if you're a Tess fan. I never heard Marketplace prior to listening and with just being laid off and looking to take a leap I figured this was a good opportunity to listen for advice and experience from someone who has.

The audio book only has around one and a 1/2 hours of meaningful content which is experiences and sentiments of others who have leaped along with Tess. The rest of the content is the same message over and over again (majority of Tess explaining to the listener how troubled she was and still is over the leap experience). She explains and elaborates in every possible way, the good, the bad and the ugly but so much of it is the same consistent message of her experience and by the time the book ended I had had enough of her explaining how challenging the experience (good/bad) has been.

The moral of the message she relays is you do what you need to do for yourself and keep in mind the commitments and the challenges a leap makes. Don't listen to others or the negative stigmas of what a leap looks likes or how it is perceived. There some small nuggets of good advice but nothing that helps the listener set goals or motivates into action.

Her presentation is phenomenal and I can see why listeners love her. Unfortunately for me I just couldn't find the value in her message. I honestly feel like if you're going to leap you should bust your a** and make better habits and do the things you've always wanted to do while putting off lounging around or "I'll get to it someday" mentality. Think about it if you're going into a new career or another job you'll want to stay mentally sharp and still try to gain skills or push yourself harder with the time that you have off.

The message of this book does not lean into that mindset and instead hangs more so on the idea of leaping and taking as much time as you need doing whatever to make you feel good (warm and fuzzy) about you moving forward.

What a perfect book

I needed to hear it. I had to leap not for my decision and I was hmm I am dealing with the identification that I created with work. I never liked it, not that I miss anything except the check and I still feel like a failure.
Hearing someone else that decide to embark I. This journey of this is not for me, for don’t have any idea what it is. It is refreshing.
I started running today download the app. Allow me to become someone different without my inner thoughts of I am a loser. It is a big change.
I would say something to Tess that I learned a while ago, whenever you decided something you always decided with the best intentions to help you out. Then, since there is no way to figure out the outcome. Just remembered that you took the decision based on your experience and your knowledge at that time.

And just to finalize I will try to get a f$&& you fund. I really think it is very necessary. Thank you. You made me feel I was not the only one in the process to change. Gracias!!

Good premise, but SO Repetitive

I like the main point of this book, but it literally goes around and around in a circle covering the same things she has already said several times over. She said Marketplace so many times, it was cringe-worthy. I admire her strength and can relate to the theme of the book, I just felt like it could have been written a little better. It came across as am auto-biography, rather than a motivating piece.