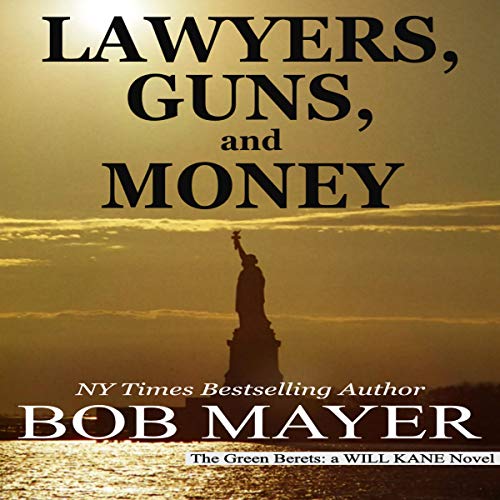 Who protects the sheep from the wolves? Another wolf.

Will Kane suffers from PTSD via combat and personal trauma and isn't playing with a full deck. But the cards he can play are usually aces, and sometimes jokers.

New York City. 1977. Ex-Green Beret William Kane has crossed the line he vowed never to: killing. But for every action there is a reaction and there are forces after him for revenge, chief among them the IRA. The CIA hasn't forgotten about him either after his involvement in covert ops in Vietnam.

There is an elite team of IRA soldiers in New York City and they've gotten their hands on some powerful weaponry. What is their target? When will they strike?

As the long hot summer of 1977 drags on and the Bronx burns, Kane does some burning of his own, unraveling secrets from his past and helping those who need his particular brand of justice while tracking the terrorists.

His problem: where is his new line?

Who can he really trust?

What listeners say about Lawyers, Guns and Money

More of an extension than a sequel

I almost feel as if this book was part of the first one as it segued perfectly from one to another. While it’s predecessor closed out the story, this is the aftermath. That’s not a bad thing. I enjoyed the follow up and wrapping of the plot with a little cliffhanger indicating where the next one will go. I’ll certainly be checking out book 3 whenever it is released.

Good story. Unfortunately the narrator speaks too fast and without any dramatic pause. It
s as if he is trying to read the story as fast as he can just to finish the book.