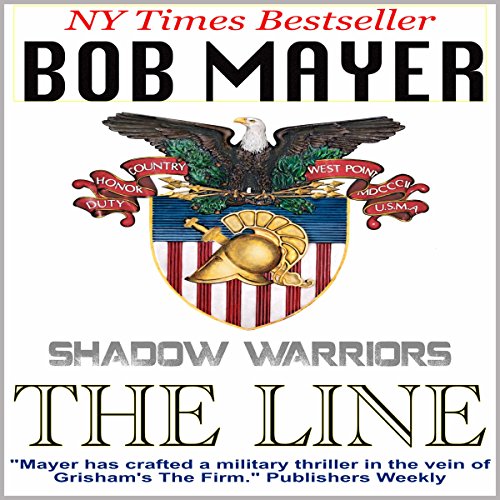 Over five million books sold. Translated into over a dozen languages.

They killed Patton when he opposed them. They've cowered Presidents into going to war. For more than half a century, a secret organization of Army officers known as The Line has been covertly manipulating US Policy. Now, in a political climate rife with dissent and unrest, The Line has ordered a pivotal top-secret operation that will let the world know who is really in charge: take out the President on Pearl Harbor Day. But The Line didn't count on Boomer Watson, a member of the Army's elite Delta Force and Major Benita Trace, both West Point graduates, staying true to their oath of allegiance and willing to fight The Line with their lives.

From The Ukraine to Pearl Harbor to West Point to the Army-Navy game in Philadelphia, it's a race against time to stop The Line as December 7th looms.

"Sizzling, first rate war fiction." ( Library Journal)
"So convincing, that by the last page, readers may doubt the official version of the last 50 years." ( Publishers Weekly)
"Exciting and authentic. Don't miss this one!" (W.E.B. Griffin)

What listeners say about Black Ops: The Line

long on detail, short on story

It's like tom clancy only without the interesting characters and the plot never takes off. I finally gave up with a couple of hours left.

It took me a little longer to get through this book...The start seemed to ramble after 20 minutes. I suppose it was to develop the characters. It helped that you sort of know where the story is going; The reader knows that the Line exists; but the Main characters tend to not be convinced AND THE CRISIS IS HAPPENING TO THEM. The writer gets 4 stars for the concept because it COULD be true.

Not a bad story and pretty well voiced, but if you are at all familiar with the genre, it is a little formulaic.

Would you consider the audio edition of Black Ops: The Line to be better than the print version?

The narrator is very good and conveying the different characters. Since there is plenty of action, keeping the characters identified becomes the narrator's job.

Yes, though some of the twists were difficult to accept, the overall speed and action keeps the listener involved.

What does Steven Cooper bring to the story that you wouldn???t experience if you just read the book?

The clarity of the characters

Without giving it away, that would be the near ending. Not what was expected.