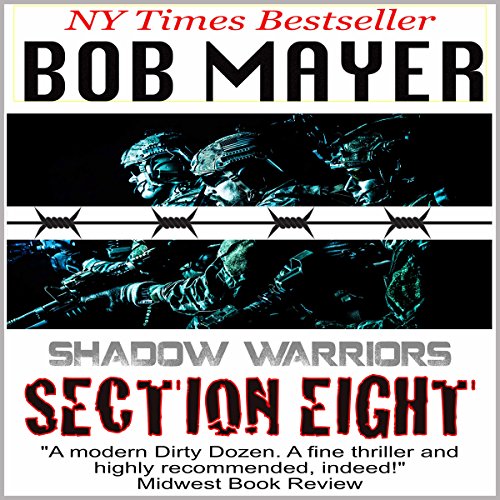 Section 8: The men and women called upon by The Organization to do the impossible. They are the soldiers with nothing to lose, making up a top-secret unit tasked with what others call suicide missions.

Long before the United States existed, The Organization pulled strings...Dating back to the destruction of the Knights Templar, possibly even further in history.

Captain Jim Vaughn is an officer in disgrace. Commanding a Special Forces mission to rescue hostages in the Philippines, Vaughn's team is destroyed, and when the smoke clears, he becomes the scapegoat. Forced into the shadows by the scandal, Vaughn is offered a chance to redeem himself when he is approached by an enigmatic government agent working for The Organization.

Vaughn is shocked to meet his new teammates, a group outside of the regular chain of command. These are soldiers who have used up all their second chances - the men and women who have crossed the line one too many times. Drug users. Felons. The terminally ill. And now, these are the soldiers that Vaughn must trust with his life. Even with a traitor in their ranks. But is the traitor actually the patriot?

This group of misfits has been assembled for two reasons - they are skilled and they are expendable. They are needed to attempt the missions that the government can't acknowledge, the country can't condone. The team cannot fail. But the deeper Vaughn gets into the group, the more he realizes that The Organization may be concealing more than the just rap sheets of its most unusual operators. A team of such unique properties is the perfect tool to use against America's enemies...and possibly America itself.

This is my favorite installment in the Shadow Warriors series. The action scenes are so expertly written I could imagine each weapon, tactical movement, and fight sequence like a movie playing in my mind. Kafer's narration adds more energy to this already exciting story. A twist at the end creates potential for a future addition to the series. I'm ready for the next mission!

I was provided a free copy of this audiobook in exchange for my unbiased review. Many thanks for this opportunity!

This book wasn't what I thought it was going to be. The author was good and I will try more of his books.