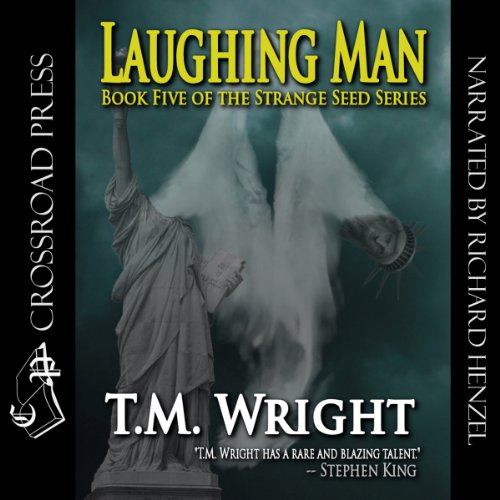 Jack Erthmun does not believe that the dead actually speak to him. But in their own way they tell him so much. Jack is a New York City police detective with his own very peculiar ways of solving homicides, and those ways are beginning to frighten his colleagues. He gets results, but at what cost?

This may be Jack's last case - he's assigned to a series of unspeakable killings, gruesome murders with details that make even seasoned detectives queasy. But as he goes deeper into the facts of the case, facts that make it seem no human killer can be involved, Jack begins to get more and more erratic. Is it the case that's affecting Jack? Or is it something else, something no one even dares to consider?

What listeners say about Laughing Man

NO NO NO, this book is crap

The reader had a New York accent, but that is all that made his reading bearable

What was most disappointing about T. M. Wright’s story?

A premature ejaculating cop? This was not in the summary, I kept waiting to get hooked into the story, just when I thought things were getting normal, I was wrong. The main character came across as disturb from the beginning not at all what the summary advised.

If you could play editor, what scene or scenes would you have cut from Laughing Man?

I would at least give Jack a couple of feathers in his hat on how this type of person made detective in the NYPD. nope just started off as him being a nut job from pressing play.

Simply put, this book sucks, I made it to chapter 12, almost 2 hours of listening, nothing makes sense and the main character is a premature ejaculating weirdo who the author lets you know that he sleeps naked way to many times. A detective that almost communicates with his victims sounds cool but this book is pure trash..... no no no run away run away