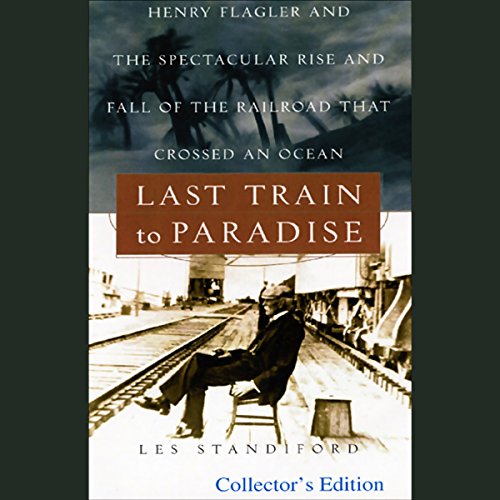 The paths of the great American robber barons were paved with riches, and though ordinary citizens paid for them, they also profited. Les Standiford, author of the John Deal thrillers, tells how the man who turned Florida's swamps into the playgrounds of the rich performed the almost superhuman feat of building a railroad from the mainland to Key West at the turn of the century. An extraordinary man and partner of John D. Rockefeller in the Standard Oil Company, Flagler had the vision to build railroads to link this backward territory with the rest of America. Last Train to Paradise shows how he masterminded the nearly impossible engineering feat of spanning more than 100 miles of ocean and islands to reach the southernmost tip of the Eastern seaboard.

"A powerful story told by a talented writer." (Library Journal)
"This book is a remarkable account of one man's dream that ended in disaster." (Booklist)

What listeners say about Last Train to Paradise

This book was a pleasant listening surprise. I try to choose books beyond my regular interest for the discipline and to expand my horizons. This book by novelist Les Standiford did the trick.

Actually, the book is the nonfiction story of HM Flagler who developed Florida as a vacation destination. Only industrial archeologist can find the remains of the railroad, but Standiford brings the era, the money, the work, and the result to life for those interested today.

This is the story of an investment, a dream, ambitions, and human failings. Well read, well written, this book is a good choice.

I bought this book prior to our most recent trip to Key West. Listened to it on the train south (appropriate, huh?).

I enjoy history that is told through a real person's viewpoint. The drama of the Labor Day hurricane that decimated southern Florida is the focus of the story. Background details of Henry Flagler, the man who built the rail line to paradise, is woven in. Without too many "boring" facts, but enough to give meat to the tale.

Included are writing of E. Hemmingway about what he saw in the storm's aftermath. Things too shocking to be published in the press of the day. The stories of many of Key West's notable personalities are included as well. If you're interested in Key West, this is a marvelous primer on a snippet of island's less-known past.

I'm a retired attorney from San Francisco who went to see an old college buddy in Florida planning to drive to Key West. Listened to the book on the plane. When we drove the "Keys" I put the book together with the drive. Very enjoyable. I you plan to visit the Keys, you would really like this book.

I bought this book prior to our first trip to Key West for listening to on the train. I wanted something a bit more "meaty" than the typical vacation read. The book did not disappoint.
It offers the story of oil barons, and the high life of pre-Great Depression society, and the dreams and goals of Henry Flagler as he envisioned and built the rail line that spanned the ocean to Key West, FL. It was called the eightth wonder of the world for a time. An engeneering masterpiece. Parts of the original train bridges are still standing. The old rail bed became the foudation of the highway to Key West, parts of which are still in use.

The author spins a tale of harrowing rescues, and recounts the post storm devastation, penned by author Earnest Hemmingway and others. I shook my head at the terrible snafus of weather forecasting and "failure to communicate" that lead to so many lost lives. Listening to the narrator, I found myself holding my breath as the evacuation train headed down the line trying to outrace the storm, picking up stranded rail workers and their families on its way.

As we drove our rental car across those same Florida straits from Miami, I could envision the terror of being out there in what seems like the middle of the Ocean. I could feel the fear of mothers for their children and husbands for their wives as the storm drew down on the Keys that horrible weekend. Passing by Mattakumbae, Grassy Key, Sugarloaf Key and others, we could see how flat those little islands are and how easily the twenty foot storm swell would have wiped everything away. The author includes mile marks on the coastal highway in his narrative.

Even if you don't plat to travel to the Florida Keys, the story is engrossing.

Awesome history about the Florida Keys

If you could sum up Last Train to Paradise in three words, what would they be?

Henry Flagler, the developer of not only the Florida Keys but also the state of Florida.

How Florida was developed

the man who opened Florida

two of Americans Titans each taking a different course both benefiting the country. it Chronicles difficulties experienced in doing business in the 30s and 40s it also provides written explanation of the terror involved with hurricanes and the fragility of the human body.

A thoroughly enjoyable read. One part gripping and harrowing account of the 1935 Labor Day hurricane and the next a fascinating history lesson in all things Flagler and South Florida.

Such a good read/listen

I absolutely loved this book. It is a must-read for any Floridian and Keys resident. So much good history and an amazing story.

If you're looking for a Flagler biography, this isn't it. But it is an interesting and funny story of most lasting contribution that he made to Florida.

The story was pretty tedious to listen to, compounded by a poor reading that was monotone in execution and delivered in a (for lack of a better term) mushy voice. Disappointing in the end. The text might be enjoyed more by those with an engineering background, appreciating the myriad details of construction.