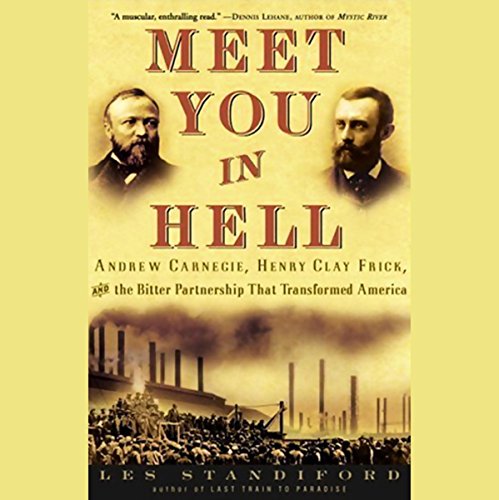 Meet You in Hell

Two founding fathers of American industry. One desire to dominate business at any price.

“Masterful...Standiford has a way of making the 1890s resonate with a 21st century audience.” (USA Today)

“The narrative is as absorbing as that of any good novel - and as difficult to put down.” (Miami Herald)

The author of Last Train to Paradise tells the riveting story of Andrew Carnegie, Henry Clay Frick, and the bloody steelworkers’ strike that transformed their fabled partnership into a furious rivalry. Set against the backdrop of the Gilded Age, Meet You in Hell captures the majesty and danger of steel manufacturing, the rough-and-tumble of the business world, and the fraught relationship between “the world’s richest man” and the ruthless coke magnate to whom he entrusted his companies. The result is an extraordinary work of popular history.

Praise for Meet You in Hell

“To the list of the signal relationships of American history...we can add one more: Andrew Carnegie and Henry Clay Frick...The tale is deftly set out by Les Standiford.” (Wall Street Journal)

“Standiford tells the story with the skills of a novelist...a colloquial style that is mindful of William Manchester’s great The Glory and the Dream.” (Pittsburgh Tribune-Review)

“A muscular, enthralling read that takes you back to a time when two titans of industry clashed in a battle of wills and egos that had seismic ramifications not only for themselves but for anyone living in the United States, then and now.” (Dennis Lehane, author of Mystic River)

"Standiford, the author of 14 previous books, brings his writerly experience to bear on this intriguing account of these two men's lives and of the industrial growth of the U.S." (Booklist)

“This superbly researched and beautifully written account of the expression of business genius a century ago illumines both the sociopathy and the generosity that then as now characterize the dynamics of capitalism.” (Robert A. G. Monks, principal of Lens Governance Advisors and coauthor of Corporate Governance)

“Les Standiford’s novelistic genius brings alive the familiar story of Carnegie and Frick with clarity and verve and a fresh eye....The most dazzling aspect of this dazzling book is the author’s clear and engaging depictions of the intricacies of the business world of another century.” (James W. Hall, author of Forests of the Night)

What listeners say about Meet You in Hell

In history, there is analytical history, there is narrative history, and there is journalistic history. Each has a place. Each can be done very well. Journalistic history tends, in my mind, to be the least satisfying of these styles, for while it can put you right into the moment of the times being depicted, it is often so deep into the moment, that it cannot see the forest for the trees. That is precisely the problem with "Meet me in hell." It is well-written, it moves along, you kind'a get to know Carnegie & Frick & some of the key players at the Homestead strike. But it reads like an endless series in the newspaper. Little context is given about the industrial revolution in America, the so-called Gilded Age (an only slightly satirical description of the period from the pen of Mark Twain), the rise of labor & a certain variety of class struggle. Little motivation is apparent in the writing about Carnegie (who was a guy with alot of self-confusion & self-delusion, it must be said), and less so about Frick. I was disappointed.

An unfortunately workmanlike straight accounting of facts with little colorful digression. The narrator is good but can't do much with the material. If you have a specific historical interest it will inform you, but in any case it will not entertain you.

I don't know if it's the reader or the story, but I couldn't even make it halfway through this book. I'm very interested in this period of US history, but this book just slogged on, trying to fit into the template of best-selling popular history books with narrative, background info, biography, etc.

A very good history of two of the most famous titans of the "Robber Baron" era of American industrialization, and their story is set against the background of the infamous Homestead Strike of 1892. Very often, American mythology makes saints out of these million- and billionaires, but their business activities were anything but saintly. Carnegie's and Frick's warts are on full display. You can even visit their homes in New York when you're done.

Meet You In Hell is without a doubt the best book I’ve ever read/listened to. Beautifully written by Les Standiford. I felt like I was watching a movie. And kudos to narrator John H. Mayer. His performance is by far the most enjoyable I’ve had the pleasure of hearing. Thank you to all. I can’t wait to hear it again.

Extremely well written narrative of the lives of two men who made sweep. Effectively mix together the grand suite of history with revealing glimpses into the characters and lives of fascinating individuals. Highly recommend it.

If you like the steel business this is a good option. Especially of early US labor relations.

David Nasaw's biography of Carnegie is a more complete picture of the man.

Highly recommended. Compelling, exciting, fair, and balanced review of the steel magnates' impact on Pittsburgh, the nation, and the international community!

Andrew Carnegie is still the favorite but this book does justice to Henry Clay Frick's background, sources of tension with Carnegie, and more than adequately explains Frick's final and bitter disposition.

Have you listened to any of John H. Mayer’s other performances before? How does this one compare?

Too many to count!

If you like history, particularly Pittsburgh or Pennsylvania history, this is a must. Incredibly well-done!

MEET YOU IN HELL

This is very interesting book however there is huge mistake in a fact that needs to be amended. The Saugus Iron Works is in Massachusetts not Michigan as stated by the narrator. While listening to this there are similarities in the facts between Atlas Shrugged and this book.
It made wonder if the lives of the characters were the basis of the book?
There is also some embelishment of Carneigie's charity. It is rumored that the only reason the charities were started was because he did not want the goverment to get any of his money.