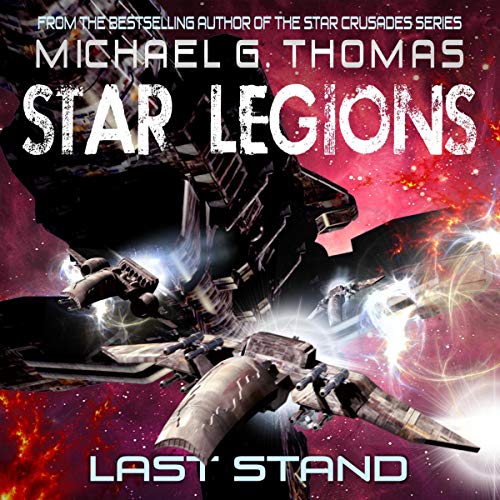 By: Michael G. Mann
Narrated by: Shamaan Casey
Try for $0.00

The Black Legion has vanquished every army and fleet sent against it, yet now this invincible Legion is in full retreat as it races away from the Emperor’s wrath. They gambled all on a single decisive battle and with it lost everything.

With victory against the Emperor now impossible, the Legion finds itself lacking purpose and money. They came to the Empire with promises of glory and reward, but now they are trapped and surrounded on all sides by enemies. The massacre of the Legion’s officer corps leaves it vulnerable, and it falls to warriors like Xenophon to hold back their desire for revenge and to put them on a path home.

The God King Artaxerxes is no fool, and he knows he cannot let a massive Terran fleet make its way through his domain unchallenged. To do so would encourage dissent in his already weakened empire. He may have fought off his brother, Lord Cyrus, but the threat of revolt is ever near. Mobilizing forces from every corner of the Empire, he throws them all at the Legion under the command of his trusted lieutenant Tissaphernes.

Last Stand is the fourth book in the Star Legions series from Michael G. Thomas, the best-selling author of the Star Crusades series, previously published as the Black Legion series.

What listeners say about Last Stand

So over the pst week and change I have been listening to the entire series. Overall I found this book started a bit slower than I had hoped however it quickly caught up. I definitely recommend do not start here. Go back and check out book 1 so you can follow everything.

Overall the author does a good job not falling in the traditional failings of a fourth book. I rate this book as great just not world changing so it is a solid 4 star book. (I honestly have found very few 5 star books in my life. So 4 star does men’s great on my scale.)

I was given a credit to purchase this story in exchange for a review however I went ahead and grabbed the whole series.

As I said eariler start with book 1.

First off, in my opinion, this is not really a stand alone novel. The story itself was complete and very well written but I felt like I was missing character development. The first few books probably covered that but unfortunately, I listened to a sample of the first audio book in this series and wasn't keen on the narrator. At all.

As for the writing, Michael Thomas does a really great job. I feel like he could easily write battle scenes for action movies, that's how detailed and clearly he portrayed the battle. I could picture the battle in my head as Casey read.

This narrator is SO GOOD. I don't know where Shamaan Casey has been all my audio book life but I think he is definitely someone to keep an eye on. His reading of this book was spot on. He also did female voices without the agonizing falsetto that some male narrators resort to. Casey has a very deep voice so accomplishing a female voice successfully was a bit surprising but happily so.

In all seriousness, I recommend that the first books be re-done with Casey as a narrator.

Need to listen to the previous books

This is the first book I’ve read/listened to by this author. I’ve not listened to the previous books. I was warned of this but I really wanted to listen to this book because of the narrator. I was a little lost with the relationships between groups and the titles given to people of rank, but clues were eventually given that I was able to catch on. It took me a while to also figure out who was the “bad guys”. I had to re-listen to a few sections since I often felt I missed something. I thought it was me and I was having troubles focusing on the story, but just prior to writing this review I read a few others, and I see I was not alone in having difficulties. I do still think this was a good book, but this is one of the cases it is probably best to start at the beginning of the series. I’m intrigued and curious to listen to the previous books.

This is the sixth book I’ve listened to by this narrator ( Shamaan Casey ) and I would listen to another. Until now I’ve only listened to him narrate one series - an historical fiction series. This was nice to listen to a different style of book. He did well with all the character voices and I loved the deep, harsh voice given to one of the characters. Despite his naturally deeper voice, he manages to do female voice as well. His cadence is good and he brings the right amount of action into the battle scenes.

There are no explicit sex scenes, gory violence. I don’t remember any swearing.

This was a great military warfare / science fiction story. I was a little lost at times, as this is the first book I've read/listened to in the series. There are a lot of characters to keep up with. That being said, there is tons of action to carry you through the book. The narration was well done and kept me engaged for the entire book. I think you'll get more out of this book if you start at the beginning, but this book stands alone well enough to still enjoy. All in all, I enjoyed the listening experience, so that's a win in my book.

This was a good book. The narrator done a great job telling the story. I would recommend this book to anyone.

I liked it!Good story,but the star of this book is Shamaan Caseys narration.Mr. Casey has a wonderful voice that can be molded to fit any character.I was given this book by the narrator,author or publisher free for an honest review.

This is the first one of this series that I have read, so, I'm thinking I should have read the first 3 of the series to really understand what is going on. That being said, this is a well written, well thought out and fast paced.
I listened to the audio book version of this book and Shamaan Casey is really good. I love the timber of his voice and the way he creates a feeling storytelling with his voice.

I liked the narrator in this book, he is one of the better one's that I have listened too. However, I felt the book is not as good, but this could be due to the fact that I have not listened the others in this series. There were to many characters and different races to get my head around. I end up being confused on who was the good guy and who wasn't.
There is plenty of action right from the beginning and it is not as long as I expected.
This is my opinion so others might like it way more then I did. I would recommend reading/listening to the others in the series before reading this one.

A sci-fi space adventure that delivers. There are a lot of characters and detail, that it’s almost hard to keep up with early on, but as the story takes off you are drawn in. A fantastic story of war, treachery, and strategy. The narration is nicely done, I have listened to other books from this author, where the narration kills it for me. This one though, kept me in it through the entire book! Makes me think I may have judged the author unjustly in my previous encounters. Well done!

Best of this Arc yet

Its the Black Legions chance to escape with some all important loot and perhaps for some, make a name for themselves. But as the battles rage we get into some great scenes and Casey does well with the narration of numerous names and details.
This is the best of the Black Legion stories yet although some may be due to familiarity with them by now.
I requested this audio and have decided to leave my thoughts.

Continuing the series and it is getting more interesting, still has the characters that you have came to love in the other books prior to this. Story is still there and lots of action.

Dozens and dozens of battleships.

The Black Legion may have won the battle but not the war. Made up of numerous Terran races, all of whom hate each other and combine only in mutual greed or in the face of an even more hated foe, the remaining ships are under serious destructive intent by all of the worlds in the God King's vast empire. Surrounded, it will take subterfuge and cunning if any of them can make it home.Sent

This is the fourth book in the star Legions series and is, essentially, an account of a single battle for all but a few minutes of it's seven and a half hours. To be honest, although I really enjoy military science fiction, I do sometimes find that the more extended battle descriptions become tedious. But not this one: I was immersed in the action throughout, as the pov leaped between different characters, ships and strategies and we'll as conflicts and betrayals between so called allies. However, I also have to confess to a certain confusion as to who was actually fighting who, given the large number, not only of individual protagonists involved, but the various races, also. This is almost certainly a result of my entering the series with this book, the fourth, rather than having read them in sequence - a situation are intend to remedy shortly (I have already purchased book one).

Narration by Sharmon Casey was good, his deep voice lending gravitas to the story as well as being closely matched to the text and his giving appropriate individual voicing to numerous characters. A good performance overall.
My thanks to the rights holder of Last Stand, who, at my request, freely gifted me a complimentary copy via Audiobook Boom. A must for all Who enjoy military space S.F. But, for character clarity, probably best to start with volume one.