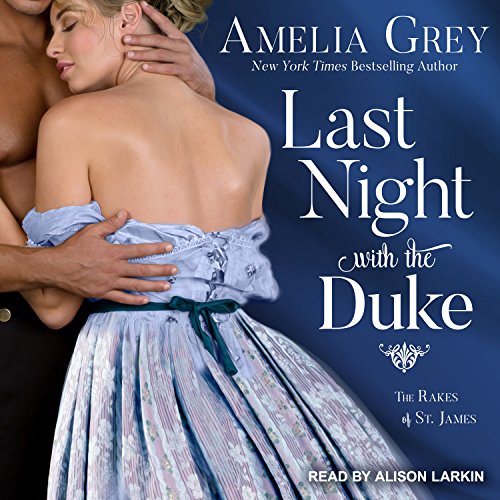 Last Night with the Duke

By: Amelia Grey
Narrated by: Alison Larkin
Try for $0.00

The Duke of Griffin has never lived down his reputation as one of the Rakes of St. James. Now rumors are swirling that his twin sisters may bear the brunt of his past follies. Hiring a competent chaperone is the only thing Griffin has on his mind - until he meets the lovely and intriguing Miss Esmeralda Swift. In ways he could never have expected, she arouses more than just his curiosity.

Esmeralda Swift considered herself too sensible to ever fall for a scoundrel, but that was before she met the irresistibly seductive Duke of Griffin. His employment offer proves too tempting for her to resist. She can't afford to be distracted by his devilish charms, because the stakes are so high for his sisters' debut season...unless one of London's most notorious rakes has had a change of heart and is ready to make Esmeralda his bride. Contains mature themes.

What listeners say about Last Night with the Duke

I enjoyed this book. Alison Larkin was good. But something went amiss. It ended uncomfortably. I felt like several things were just forgotten. Another sub plot was literally discarded, and all the build up of another was for naught. I did enjoy the whole listen but was left feeling unsettled.

There was a little heat.
I'm not sure if it's really creditworthy. I think it is, I just feel like all the pieces were there for this to have been excellent but they weren't ever put together.

The book itself was a great read. The narration made it absolutely horrible. I couldn’t get through more than one chapter on the audio version.

If you see Alison Larkin as a narrator, don’t buy it!