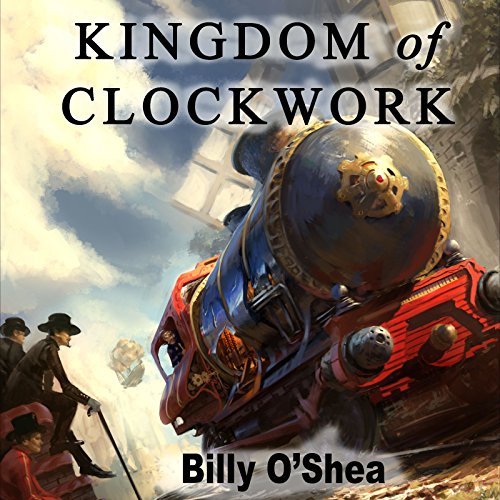 When the oil and gas ran out, civilization collapsed. Now, centuries later, mankind is once again beginning to discover the secrets of the past...starting with clockwork.

In a future Denmark, the King's clockmaker becomes enmeshed in a web of court intrigue and undertakes a fateful journey to the Far North, where he encounters many strange phenomena that challenge his rational nature.

Kingdom of Clockwork is a science fiction/steampunk novel by Billy O'Shea. The story takes place in a quasi-medieval society that arises in Scandinavia after the new Dark Ages. Lacking fossil fuels and knowledge of past technology, the new kingdoms of the northern lands can only draw upon the power of the wind, which they store using clockwork. But the King of Kantarborg has a plan to mine other secrets of the past, and weaves a young court clockmaker into his dangerous schemes.

Kingdom of Clockwork has been described as "alternate history, historical fantasy, and steampunk". It is a quirky, intriguing, slightly whimsical tale of reason, magic, and human cunning. The story combines real Scandinavian history and locations with flights of fancy, both literal and metaphorical.

Very slow start, but worth it completely

the start of this story was So slow to interest me I almost quit listening. As the story takes more form this author got me Interested to keep listening. By the end I was So happy I did Not stop. On to the next book I. this series.

Intriguing Start to a Steampunk Series

4/5 stars Kingdom of Clockwork (Written and narrated by Billy O’Shea)
Summary: Karl Nielsen (going with the spelling I found in a review since I listened to the audio and the blurb doesn’t mention the main character, which is weird) is the king’s clockmaker. Despite kind of just wanting to do his thing quietly, he gets caught up in the court intrigue.

Additional Comments:
-5/5 stars for world-building: This is an intriguing world. To be honest, I had no idea it was supposed to be a future Denmark until I read the blurb (after listening to the book). It’s a future sort of set in the past. There are some things that don’t make sense but it’s not for lack of effort on the author’s part. As a world, they’re back to fighting with muskets and swords and using steam power. Yet there are remnants of what once was, forbidden railways and the like.
- 4/5 characters: Karl’s interesting as a narrator. I enjoyed the beginning even though it didn’t have much to do with the end except describe the world we land in. The king comes across as a decent king, which sort of requires him to be a jerk at times.
- 3.5/5 plot: The beginning is cool because it introduces you to a quaint world set in a future that’s been sent to the past by war and lack of oil. The middle is interesting because it features the bulk of the court intrigue and the start of what could be an exciting adventure. And then, it sort of just runs out of steam (sorry, had to do it). The main character doesn’t actually do much. He’s mostly an observer on this journey that takes up the bulk of the book. It turns into a political thing solved through means that don’t involve a good physical fight (that’s kind of disappointing). It ends with an okay amount of closure, but there are definitely threads to follow into a sequel.
- 4/5 Sound effects and narration: The sound effects were cool and the narration was well- handled.
- Content warnings: It’s mostly a clean fantasy read. There are some mentions of adult content late in the book, but nothing’s particularly described. Still, it’s a bit of an oddity because the rest is something that would be cool for a middle grade student.

Conclusion: Good start to a steampunk, pseudo-historical tale.
*I received a free copy of the audiobook. I have chosen to review it. All opinions expressed are my own.*