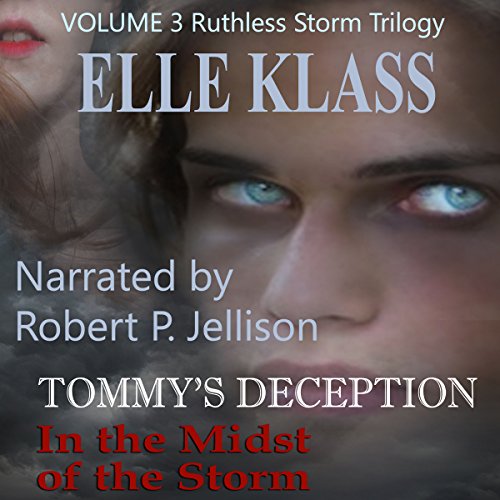 In the Midst of the Storm: Tommy's Deception

In the Midst of the Storm: Tommy's Deception

Tommy and Eilida meet again at Flashers, the local college bar. Their friendship develops quickly. Then a student is murdered in her dorm, a previous victim of the Hurricane Killer. The assailant is on the loose when Eilida's apartment is broken into and she runs to Tommy for safety. She discovers his birthday is the one day that makes her soul cry, but is it only a coincidence?

The cards stack against him as she finds Tommy is hiding astrological charts and Evan's map; material that would have solidified a case against the Hurricane Killer. And Eilida discovers a ring that went missing the day she met Tommy at an astrology convention before her accident was present at Evan O'Conner's murder scene. Did Tommy kill the monster? Or is he picking up where Evan left off? Will astrology give her the answers?

The nightmares of Eilida's past rush forward and everything points toward Tommy.

This audiobook is intended for audiences 18 plus due to explicit content.

What did you love best about In the Midst of the Storm: Tommy's Deception?

I totally enjoyed listening to this novel. I have listened to other audiobook from the author and I they were very good, full of suspense.

Excellent end to the trilogy!

Elle Klass did and excellent job with this series! Very creative and very creepy! Poor Eilida has been through a lot, but with Even dead her problems should have been over. She runs into an old acquaintance, Tommy, and life gets complicated again! Is someone out to get her again? Did Evan have an accomplice? And who really killed Evan? Book 3 answers those questions. Great narration by Robert P Jellison.

Astrology, Sex and Not Too Much Mystery

Sadistic in too many ways but impossible to put down. I am quite impressed with the characters and how the book made it all seemed so real.
"I was given this free review copy audiobook at my request and have voluntarily left this review."

I really enjoyed this series sorry to see it ended. I loved all the characters Eilidia, Tommy, and Alice especially. You finally find out who killed Evan and evil mast murderer known as the Hurricane Man. There were twists and turns in this book and recommend the series to anyone who enjoys horror thrillers. I was given this free review copy audiobook at my request and have voluntarily left this review, Thank you!!

What was one of the most memorable moments of In the Midst of the Storm: Tommy's Deception?

I totally enjoyed listening to this novel. I have listened to other audiobooks from the author and I they were very good, full of suspense.

I really enjoyed this series! This series kept me guessing and on the edge all throughout. The narration was amazing! It will keep you entertained! The author did an excellent job with the character builds and plot! I look forward to reading more books from this author! I was given this free review copy audiobook at my request and have voluntarily left this review.