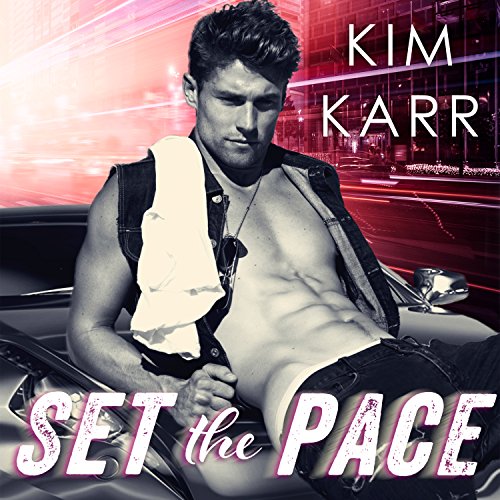 By: Kim Karr
Narrated by: CJ Bloom,Sebastian York
Try for $0.00

A rough childhood branded Jasper Storm trouble. A bad boy. Not worth a damn. His love of cars was the only thing that could battle his delinquency. With the need for speed in his blood, he overcame his wayward ways. Mostly. Now that he's all grown up, the broken city of Detroit hails him as its shining star. And the man behind a new cutting-edge automobile is ready to turn this bankrupt town around.

Everything he does in life is fast. He talks fast, f*cks fast, and drives fast. But when one reckless turn brings him face to face with the childhood he has tried very hard to forget, he finds himself on the edge of wondering if he shouldn't slow down.

Charlotte Lane was the tomboy who lived next door. She was his best friend. He was her protector. Then tragedy struck, and she disappeared forever - or so he thought.

"What a ride! There is so much adrenaline in this book, so much heat; no emotion was left untouched! Loved every second!" (Katy Evans, author of Legend)

What listeners say about Set the Pace

Can I just say I wish someone would post it's a cliffhanger and a cliffhanger that doesn't have the sequel finished yet!!! Ugh! Love the story and of course SEBASTIAN YORK, but please change the female narrator for the next book! U can't go from SY voice to her imitation of a male narrator...ugh awful! Andi Ardnt or Veronica Muench plz 🙏🙏🙏

Pretty good book but there is a sequel that has not been published yet. I'm really tired of having to buy 2 or 3 books to get a story that could be just 1 long book. Also would like to be notified before I purchase the book that you have to buy additional books to get the entire story.

The book has everything hope, mystery, murder, romance, hot sex, speed & a whopping cliffhanger. I am so disappointed that book 2 is not yet available on Audible but I will be the first to pre order when the time comes. this was the first book I read by this author and I'm impressed with the depth of a book I thought would only be about the sex & love. As usual Sebastian York kills it as Jasper Storm. CJ was good but not my fav lady narrator.
hope you enjoy the book as much as I did#

Really enjoyed this book❤️💋❌⭕️
Set the Pace has all the goodies we romantic gals ❤️ love to lust over.
It has just the right amount of angst, hot panty melting moments, bad boy we hate to love, interesting storyline, murder, plot twists, danger & romance.
Yes it’s a cliffhanger, but as both books in this duet are available and both are in the romance/escape package... no sweat off my brow 😉
York’s narration as usual is hot hot hot and perfect for badboy Jasper. He really has one of the sexiest male voices out there... rawrrrr!
I’m not a huge fan of Ms Bloom’s narration though. I first heard her when she narrated The Last Riders series, by Jamie Begley but it still became one of my fav listens & I highly recommend the series to others. Her voice may just be my own personal quirk, I find her annoying but again, tolerable. With that said, This book was WELL worth my time and I would hate that sticking point to discourage you from this download... it’s awesome!

Would you listen to Set the Pace again? Why?

What was one of the most memorable moments of Set the Pace?

When Jake and Charlotte get together as a couple.

Have you listened to any of CJ Bloom and Sebastian York ’s other performances before? How does this one compare?

Yes - As usual Sebastian York hits it out of the ballpark. CJ's voice is very grating on the nerves when she tries to do annoyed.....Uh!

As they remember childhood memories and how Jasper always took care of her.

ABSOLUTELY HATE CLIFFHANGERS LIKE THIS WHEN THE NEXT BOOK HAS NOT BEEN RELEASED!!!! READ THIS AUTHORS, IT IS ABOUT ENJOYMENT NOT FRUSTRATION!!!

So entertaining to listen to.

I wanted to reread Set the Pace before the next book comes out. I decided to get the audio book . I am so glad I did. The voices of Jasper and Charlie were perfect. I really enjoyed listening to it. Love this book and loved the audio version as well. I hope the same people narrate the next book.

Sebastian rocks Jasper but CJs a forget me not!

Unfortunately I found the female delivery long breathy paragraphs one dimensionally provided the same emotions regardless of the circumstances happening, the characterization/delivery was flat with redundant inflections. The book is going on well but it is a cliffhanger so get ready to hang.

Book one in duet

Jasper and Charlotte were best friends as little kids, but one tragic night turned both their worlds upside down. Fast forward 20 years and fate brings them back together. Mysterious circumstances and deadly events plague their reunion. Their attraction for each other is palpable but mistrust and the influence of others keep the emotional angst high.
This series surprised me. I've enjoyed several of the author's works but I wasn't sure if I'd like one built around the automotive industry since I'm not really a car person. While there were some technical speak, the majority of the story was wrapped around the mystery. I really got into it. This is a cliffhanger and I am glad I had the second book in the duet to read asap. The audiobooks for both halves were great companions and the narrators CJ Bloom and Sebastian York were amazing.

Childhood best friends reunite to solve past and current crimes that come between them. This is a duet but would have been much better has both books been edited down to one. There are some flashbacks that are unnecessary, and time spent on repetitive character development. Sebastian York’s narration is great but CJBloom’s sounds too Goody Two Shoes at times and her male voices to forced and harsh. Ok for a 2 for 1 sale book since you need both books or as a give away but not worth a credit. Judicious editing and a better female narrators could have made this all fives.

Check out my podcast for a more in depth look into it! The Best of Audio Romance, available on Apple, Spotify and other major platforms!

Terrible ending! It just ended on a high! Seriously I thought mabe there was a second book to finish it!