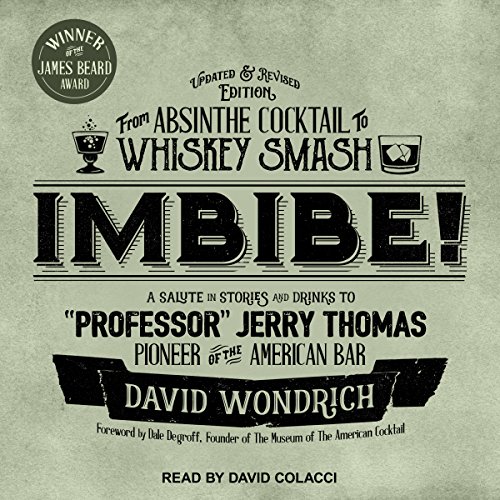 By: David Wondrich
Narrated by: David Colacci
Try for $0.00

Cocktail writer and historian David Wondrich presents the colorful, little-known history of classic American drinks - and the ultimate mixologist's guide - in this engaging homage to Jerry Thomas, father of the American bar.

The first edition, published in 2007, won a James Beard Award. Now updated with newly discovered recipes and historical information, this updated edition includes the origins of the first American drink, the mint julep (which Wondrich places before the American Revolution) and those of the cocktail itself. It also provides more detail about 19th-century spirits, many new and colorful anecdotes and details about Thomas' life, and a number of particularly notable, delicious, and influential cocktails not covered in the original edition, rounding out the picture of pre-Prohibition tippling.

This colorful and good-humored volume is a must-listen for anyone who appreciates the timeless appeal of a well-made drink - and the uniquely American history behind it.

"This book will leave you shaken and, I hope, stirred. Wondrich, one of the top spirits writers in the country, delves into the rich and fascinating history of mixology in America." ( USA Today)

What listeners say about Imbibe! Updated and Revised Edition

Yes, I know that the recipes are available as a PDF, at least give me a quick run down of each one in the audio. It would not take long to say, "a shot of whiskey, a few dashes of bitters, and 1/4 ounce of absinthe, over ice." then when you are describing the wonderful history of a drink that someone made at a wonderfully historic bar and served to famous people, we have some idea of what it is. Stopping and having to reference a pdf in a different program turns what was a light interesting listen into a homework assignment that I get to drink (which is the best kind of homework, but still homework)

This is an awesome history of Jerry Thomas and cocktails. The author and narrator seem to really connect as you felt as they were the same story teller. The book provides history, antidotes and best of all booze! The only wish / suggestion I would have is that the narrator would read the recipe for each drink and not just refer to the PDF. I would have liked to hear about the drink then though my ears let my mind and palate connect on each of the drinks. It sort of left me thirsty! Other than that fun book to read / listen too.

Seriously required if you want to claim the title “bartender”

David’s book was so rich in content and story. I felt like I was dropped in America 200 years ago and I found myself wanting to mix drinks at every hour of the day. That would probably well embody the aforementioned times. This book has served as a foundation for my ongoing cocktail obsession. My only criticism would be that I wish the audiobook at least listed off the ingredients in the cocktail recipes as they were being described as the bonus PDF wasn’t always accessible as I listened to the book during my commute. However, i DO recommend downloading the PDF ahead of time as it’s great to follow along to the described recipes with the actual recipe in front of you.
L

Doesn't Get Any Better for Cocktail Lovers

Wondrich is a gift to the bar world, and this his magnum opus. I loved it when first published and this update packs enough new info to justify a second read (and purchase).

Great book about the history of the American Cocktail. Well researched and fascinating history explained about a topic with sources of history scattered through out news papers and various publications.

I enjoyed this book. The history, facts, and stories are fun and informative.

My only complaint is that I greatly wish the recipes would have been read out loud. I often listened while I was unable to read (isn't that why we listen to audiobooks?) the recipes and I found it frustrating to hear an excellent description of a drink and then NOT hear the actual ingredients.

Otherwise, I would have given it 5/5.

A superb telling of a master's journey

Thoroughly researched, but equally important, well written and engaging in jts reading.
This is an audio book that I am inclined to buy in hard copy for future reference... the information was detailed in its focus.

The narrator was great and covered allot of the knowledge passed down through the bartender world from Jerry Tomas, Wilard, and the only William. great read.

I concise history of spirits

Concise, full of history, for those who want to know the history of each spirit

fantastic in depth and informative of primarily American cocktail history well narrated. I would suggest having the recipes handy while listening because they are left out of the narration.

This is a great book about the history of the cocktail and it's founder Jerry Thomas. It really shines when you use it to practically create historic beverages from the hey dey era of the cocktail. It's a historic guide and while you do get access to a PDF of recipes I find it much more satisfying whipping up drinks with a book in hand than a tablet of phone.

A great resource but I'd recommend buying the physical book.

This book play's devils advocate with you if you

I love this book being a cocktail enthusiasts form the age of 19 i have learnt many a things and found a passion within the drinks this book describes. I love the story of Jeryy Thomas as i owning a copy of his book "the bar tenders guide" i've had a strage love for the art of cocktails and have read many a book's in hope of them expending my knowledge and i promise you i have read some books on it, yet none have had me yelling at the pages as much as this book has; and for it to prove me wrong time and time again, i love the history behined theas cocktail's look no further, and if you are under the mistaken delusion that you understand cocktail's take the time out of your day and test ur knowledge against this man's. Thank you for a book that hase changed my perspective vest of love myself Robby.L Courtney