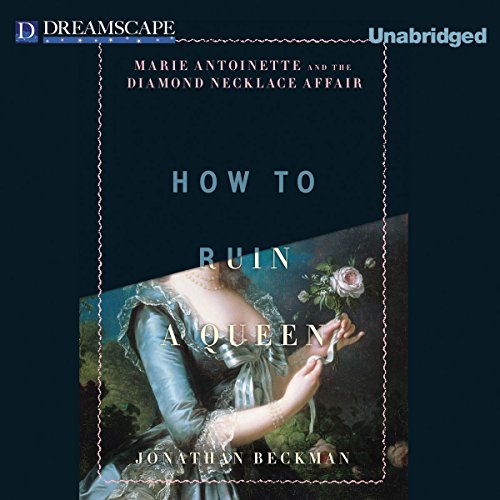 How to Ruin a Queen

By: Jonathan Beckman
Narrated by: Michael Page
Try for $0.00

In 1785, a sensational trial began in Paris that would divide the country and captivate Europe. A leading Catholic cardinal and scion of one of the most distinguished families in France stood accused of forging the queen's signature to obtain the most expensive piece of jewelry in Europe: a 2,800-carat diamond necklace.

Where were the diamonds? Was the cardinal innocent? Was, for that matter, the queen? The revelations from the trial would bedevil the French monarchy as the country descended into a bloody revolution.

"With its exuberant use of language and subtly ironic storytelling, it is almost as colorful as the scandal it unfolds." ( Sunday Times, UK)
"Jonathan Beckman skillfully unfolds the intricacies and absurdities of this extraordinary episode... [and] provides us with an engaging and finely-researched study of an affair that, despite having the plot of a frothy operetta, was of genuine historical significance." ( Literary Review, UK)
"A hell of a tale and Jonathan Beckman gives it all the verve and swagger it deserves." ( Spectator, UK)

What listeners say about How to Ruin a Queen

WOW!!!! Just finished this amazing tale, and once again truth is stranger than fiction. It's got everything--treachery, venality, ambitious nobles, conniving commoners, royals and rascals, daring escapes, amazing twists, foreign intrigue and diamonds. Carefully researched, clevarly written, and beautifully read. If I could give it 6 stars, I would:)