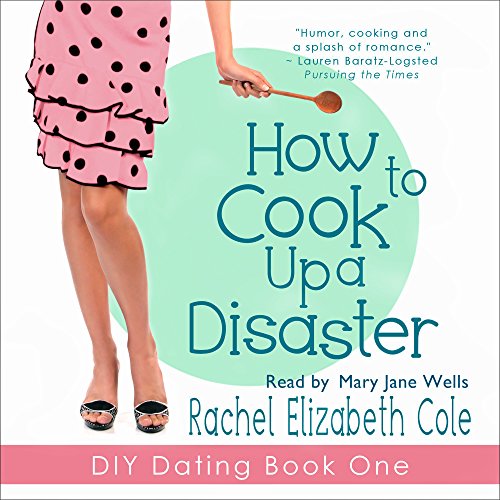 How to Cook Up a Disaster

How to Cook Up a Disaster

Sadie Dawson's mother goes into labor hours before her great-grandfather's 100th birthday party and Mom refuses to cancel the festivities! Now it's up to domestically-challenged Sadie to host the dinner party - only she hasn't a clue how to cook a turkey.

This could be the mother of all culinary disasters, but with the help of her two best friends, Sadie is determined to pull off the best dinner party in a hundred years. And maybe land Mr. Right, too.

Mary Jane Wells' effortless narration adds just the right dash of spice to this breezy chick lit romantic comedy. You might just have seen her in the films Elena Undone and Meth Head, or as Josie Marks in the HBO series The Newsroom, or caught her work on the Downton Abbey audiobooks.

How to cook up a Disaster

This was a fast,fun read.It's grandpes 100th birthday,Mom goes into labor and 1 20 something is left to figure it all out for the first time ever! Mary Jane Wells did a great job narrating this story!I was gifted a copy for a fair review.

Nice but wish it were longer...

If you could sum up How to Cook Up a Disaster in three words, what would they be?

The old people of course. The fact that they feel entitled to saying anything they wish to and often do so is hilarious.

Which character – as performed by Mary Jane Wells – was your favorite?

Oh I laughed...oh how I laughed because I have been there.

I would read any other books this person wrote.

Where does How to Cook Up a Disaster rank among all the audiobooks you’ve listened to so far?

This book was great and very entertaining.

What was one of the most memorable moments of How to Cook Up a Disaster?

The whole book was memorable, uncooked turkey, brothers spiking the punch and sexy fireman. The narrator was very easy to listen to and I loved her accent. I am looking forward to listening to more books by this author and narrator.

Great book, I am looking forward to the next one.

Definitely not a Disaster!

Where does How to Cook Up a Disaster rank among all the audiobooks you’ve listened to so far?

What was one of the most memorable moments of How to Cook Up a Disaster?

The Turkey disaster, the drunk twins, the birth of the boy (luckily not named Piper after all) and the disbelief of the fireman's proposal for dinner.

Have you listened to any of Mary Jane Wells’s other performances before? How does this one compare?

No, it was the first one and I liked her very very much!

It made me laugh in more than one occasions, I think I was laughing all the time...

I received this audiobook in exchange for an honest review. All thoughts opinions and ratings are my own.
I hope this review was useful to you and helped your decision to read or not read this book. I love reading and sharing my opinions with other readers.
Thanks a lot Rachel Elizabeth Cole & Mary Jane Wells for this book.

Cute story that I hope gets expanded.

This was a cute little novelette that I hope will one day be expanded into a novel. Sadie and her family make very interesting characters and I would like to see that expanded upon, along with the sudden romance that was introduced.

Mary Jane Wells gives a great narration. Her pacing was great and her accent was surprisingly appropriate. Excellent inflection.

Cute story that I hope gets expanded.