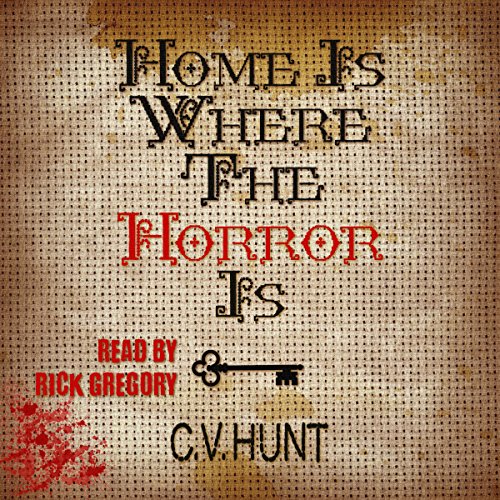 Home Is Where the Horror Is

The beautiful thing about life is that it isn't perfect.

Evan Lansing manages to eke out a living as a photographer, capturing the beauty of severely marred and deformed people. He's content with his meager existence, but his longtime girlfriend, Naomi, is looking for more out of life - things that cost money - marriage and children. Evan's options are limited when he and Naomi resolve to split. He can stay with his brother and his brother's insufferable wife and daughter, or he can move into his deceased mother's remote cabin and renovate it. The solitude of the cabin is an enticing alternative for Evan to start anew. But disturbing things begin to happen once Evan moves in and it leaves him to question if staying with his brother wasn't the better option. And then there are the neighbors...

What listeners say about Home Is Where the Horror Is

Had Promise But For Repulsive Protagonist

*I was given this free review copy audiobook at my request and have voluntarily left this review*
The book started out with promise. The character and plotline was interesting and the build up of creepiness was great. But then the book just took a nosedive into the most depraved and disgusting scenes and I had to stop listening. The character himself turned into a stereotypical creep - masturbating to disturbing thoughts or pictures procured from facebook without the woman's knowledge or consent. That was bad enough, I thought. Then came the (very long and extremely graphic) scene of this same 30 year old character having sex with his underage neighbour. It was gratuitous and unnecessary. That was the final straw and made me sick to my stomach.

Not sure, I haven't had the greatest run with Audiobooks lately.

I have commented on this narrator before, he pauses at the oddest moments which is frustrating. He sounds like a robot.

If you could play editor, what scene or scenes would you have cut from Home Is Where the Horror Is?

The long and graphic scene mentioned above where the 30 year old man has sex with his underage neighbour.

Mom's Neighbor's House is where the Horror is

I liked the first 5 hours of the book. Couldn't stop listening and was super excited to see where it was going to next. Unfortunately, I didn't like the last bit of it. Wasn't overly excited with the climax and not at all with the ending. It wasn't a terrible ending, but I was hoping for something better. There were so many places the story could have gone and never did and what we were given seemed less imaginative than the rest of the story.

The horror was a slow roll and I would say there was more tension or suspense waiting for what was to come. The sex scenes are graphic and almost seemed as if that is what the story becomes about. I would have gladly traded some of those scenes for more story of Evan and Rachel. To me it felt like the story was 3 parts; plot and character development, sex, ending. Once the sex started there was little plot left to tell and the ending felt rushed and premature.

Rick Gregory did a great job with his performance. My only issue was the sound quality jumped around a bit. It was obvious when he stopped and started again as it sounded like he was in a different room with a different mic with a different volume. Threw me off when that switch happened.

Whatever u do DO NOT get this so-called book. It’s not a thriller it’s a poor version of a Child’s sex story. The writer uses words like he’s a teenage boy
It makes no sense. Just don’t waste ur time or money and the narrator sounds robotic
Just Plain Bad

I don't know what just happened.

Um wow, ok first the narrator was very good, he captured the main characters apathy perfectly. The story may have been good but I must have missed something. Basically a slacker starving artist type moves into his late mothers cabin and has some super creepo neighbors. He has weird dreams, wakes up weird places, and has a lot of sex/thoughts. It was extremely sexually explicit, not really your normal smut but straight up Rob Zombie torture porn, like the whole book with a little mystery built in. All in all it was weird and a little sick. I was given this free review copy audiobook at my request and have voluntarily left this review.

Wow! What a gruesome and perverse horror story! I loved it. I am a photographer myself like the main character, Evan. That made this story even more enjoyable for me, although my taste in subject matter is a bit different. Evan prefers to photograph deformities and scars. The story is very creepy throughout and just gets more gruesome and perverse as the story continues. Excellent narration by Rick Gregory!

Overall I think this book is well worth listening to. I think the narration was pretty good and added to the overall creepiness of the book. It could have been a bit smoother. The story is different and has several descriptive sex scenes. I was not able to figure out the ending. Grab this one and add it to your library!

I was provided this book at no charge. This review was not required and is my own.

I found this to be an interesting, if gruesome, psychological horror story. Good use of the &quot;creep factor&quot; and rich imagery. It starts off like a ghost story and ends more like Amittyville Horror, but more sexual. Definitely a twisted story, but worth a listen if you like extreme horror.

totally twisted! I loved it

A totally twisted book.
I liked this book. It was a different look on horror, and it was not about a guy who happend to fall into owning and then moving into a haunted house.
This was more about scary things, and creepy people who live next door. It book was full of taboos, and is not for the faint hearted.
There was some crazy scenes in this book.

something off with whole the rhythm of the story

Evan Lansing tries to make a living out of a special kind of photography. He likes to take pictures of deformed and scarred bodies. Her wife Naomi has her mind on completely different things. She wants a stable life, children, and commitments. As Evan is not able to give her what she needs, Naomi leaves him for another man. Between living with his brother and his terrible family, and living at her mother’s old house, Evan choses the latter. But he will not be prepared for his new neighbors and the strange things that happen on the area.

I became soon interested in this story. In my youth I studied photography, among other things, and I remember seeing a book or two about photographers with this same obsession. I think it made for an interesting and original character.

The first part of the book is a bit slow but I enjoyed how it was written. There is something off with whole the rhythm of the story though. There is no real terror until almost the end of the book, around forty five minutes towards the end. There are weird events and unpleasant things, but not horror. I enjoyed the build up, but the outcome was so rushed that I did not have time to ‘feel’ it. I was expecting most of the time for something to happen, and then I realized there was just one hour to finish the book; something quick happened, and then The End.

The horror in this book is mostly psychological, similar to the one created by pure anxiety, which is what prevents Evan from taking real measures and leaving the house. There is gore at the end, but as I have said, it feels rushed.

Evan has a brief relationship with a girl, and curiously, they have great sex. I always find it kind of surreal when couples in books have sex for the first time and everything goes like clockwork, and they even have three or four intercourses in one day. Am I from a different planet?

Rick Gregory’s narrations is one of those that give you a seamless experience, not disturbing the story in any way. It is clear, voices are distinct enough but not overdone, and he makes you forget that you are listening to an audibook. The audio production is also spotless. The only issue that I noticed were a couple of unexpected pauses on the narration. It could have been pauses for effect, but anyway they did not feel completely natural to me.

All in all, I enjoyed the story, but I think it would have benefited from a more prolonged horror at the end.