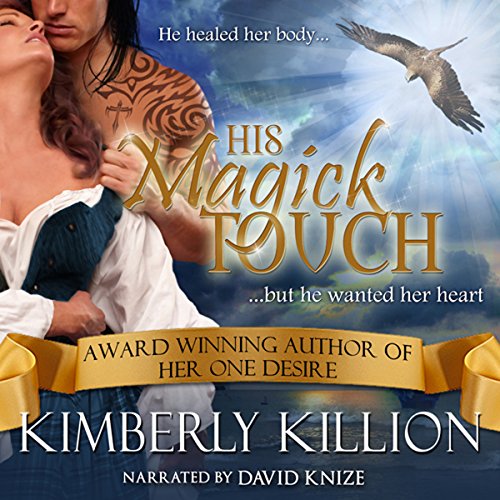 By: Kimberly Killion
Narrated by: The Killion Group
Length: 1 hr and 6 mins
Categories: Romance, Historical
2 out of 5 stars 2.1 (7 ratings)

By: Kimberly Killion
Narrated by: The Killion Group

Scotland, Inner Hebrides - 1587: Sorcha's husband is easily the meanest cur alive. He blamed her for every misfortune that befell his clan since he took her to wife four years past. And now the bastard is determined to kill her. If she were half the witch he accused her of being, then she might possess the power to save herself, but Da had ousted her grandmum from the clan before she taught Sorcha the Pagan ways. She is certain of only one thing - if she lives long enough to become a widow, she will never take another husband.

Keiran, the Falconer of Barra, knew he and Sorcha were worlds apart in station - he, the son of a crofter, and she, the eldest daughter of the chieftain - but he'd spent the past seven years of his life trying to change his stars. Everything he'd done had been for her. He'd fought and killed for the clan and learned the Pagan ways, for her. And now that he'd saved her life and took her pain away, the foolish wench accused him of doing it all for the chieftainship.

Will Keiran's gentle touch crush the last of her resistance? Or will Sorcha's husband hunt her down and kill her before she discovers the depth of Keiran's love?

Originally published in The Mammoth Book of Scottish Romance.

Award-winning author Kimberly Killion has been hailed by Romantic Times magazine as an author who writes "captivating romance with excellent pacing and characters who are honorable, intelligent and full of humanity." Her debut book, Her One Desire, was nominated for the romance-publishing industry's highest award of distinction, the RITA Award. Her One Desire won the 2009 Booksellers Best Award for both Long Historical and Best First Book. In addition, Kimberly's writing was recognized in the 2009 National Readers' Choice Awards, the 2009 Golden Quill Awards, and the 2009 HOLT Medallion. Romantic Times magazine awarded Kimberly's second Scottish-set novel, Highland Dragon, with the K.I.S.S. Award and said this is "a tale to cherish".

narrator was so boring. no emotion at all very monotonous voice. do not get this. not worth it

I thought the story was okay but it was ruined by the narrator . His accent was awful

What a god awful narration

I listened to about 10 minutes of this story, was appalled at the use of American clichés, for heavens sake it's historical Scotland. Woeful attempted Scottish accent, I know it's fiction but gods teeth, I am an Aussie and can do a better accent then that. Hell I can read and act better then what I just listened too. Forget the story line there isn't one.